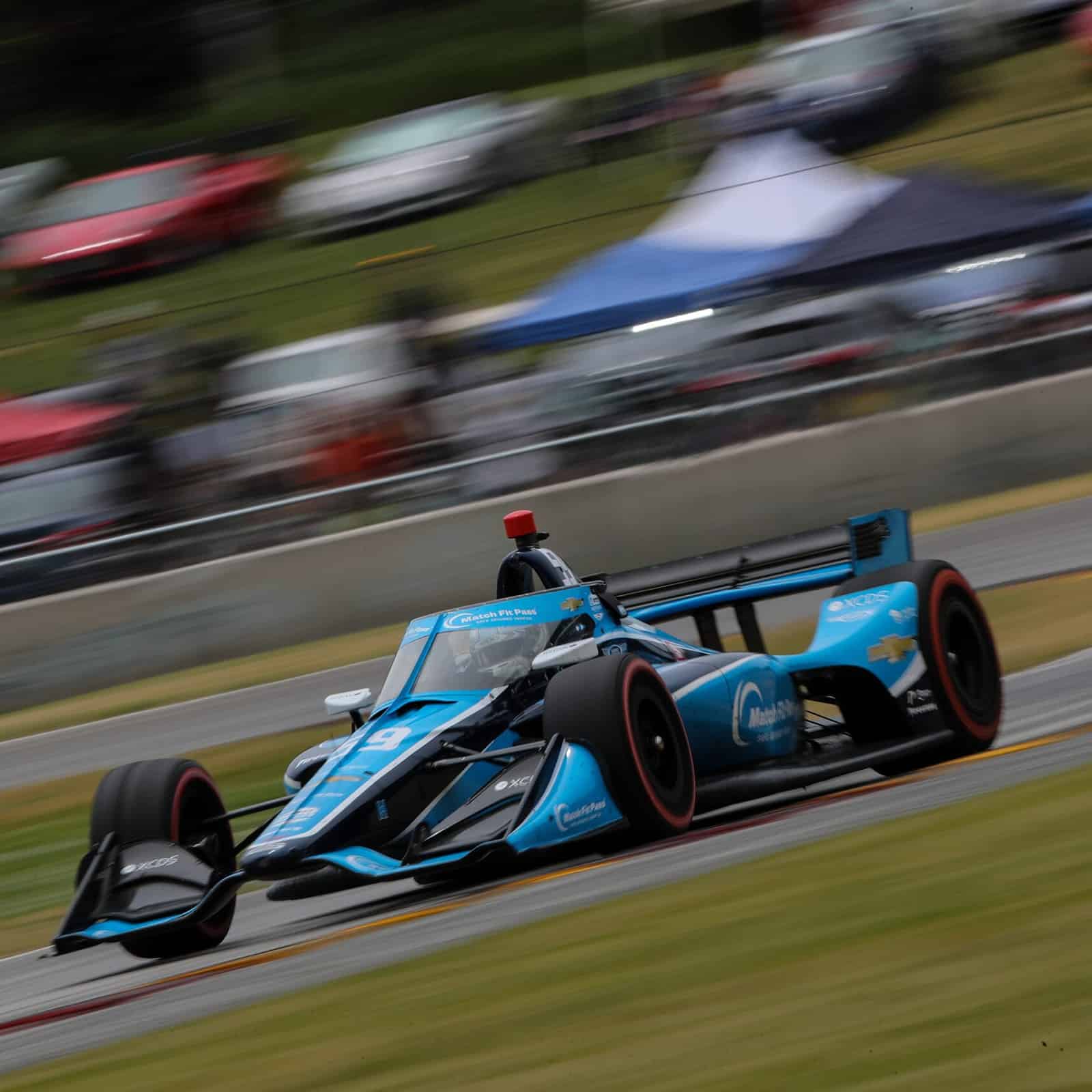 Max Chilton’s top-10 finish at Road America on Sunday was a long time coming for the Carlin Motorsport racer.

That’s how long it was since Chilton finished eighth when the NTT IndyCar Series raced at Watkins Glen in September 2017 and that dry spell ended with a 10th-place finish at Sunday’s (June 20) REV Group Grand Prix for the No. 59 Chevrolet.

The 55-lap race around the 4.014-mile circuit near Elkhart Lake, Wisconsin provided Chilton and his team with a strategic opportunity to vault themselves to the front of the field. Kevin Magnussen’s No. 7 Arrow McLaren SP Chevrolet had a mechanical failure exiting turn 7. With Chilton’s position on the track in the final sequence of corners, race strategist Luke Mason called his driver to pit road. While Chilton was on pit road, the full course yellow came out.

“Then I knew it was going to be great and at that point your heart rate raises and you think, ‘Shit, I’m going to be leading or I’m going to be right in the front, and I haven’t been there for a long time,” Chilton said post-race. “But as soon as I got there, it felt like I was at home again, so I know I can do it, I know I’ve been in IndyCar six years but we’re a small team. At Ganassi it was fairly easy, with us it’s a struggle but that’s a sign of movement in the right direction.

“Annoyingly it wasn’t like a normal race where everyone pitted and we got to the front, but what it did help is once we restarted and everyone pitted, we had good tires to run and pull that gap because I got to the front and my times apparently were super competitive. It gained us positions, so on the restart we were right up there. So yeah, it was just one of those races everything went well.”

Chilton took the lead from Takuma Sato and would lead seven laps before having to pit on lap 48. This was the first time Chilton had led since Portland in 2018, but there’s more to it than just leading. While the British racer was up front, the gap to Josef Newgarden and eventual race winner Alex Palou was relatively stable at around 18 seconds.

Carlin’s car was as fast as Team Penske’s most recent race winner. Sure, it was a bit off strategy with the fuel load being different, but the driver still has to do the work behind the wheel and the car has to be set up properly. But for Chilton, being up front was a bit of a throwback.

“It felt like back in my young days when you’re going through the ranks, F3, GP2, if you’re not leading regularly, you’re not usually in the right place,” Chilton said. “I led quite a lot of my junior formula races, so it’s the best place to be. You’ve got clean air, you don’t have to look in your mirrors, you just go forward and hope the team have got the strategy right.

“Man, it felt like a win, like I genuinely went mad on the radio, all I’ve wanted for three and a half years is a top 10 and today we did it, we were the third highest Chevy so I think we were up against it and we really really did a good job.”

Chilton and the rest of the Carlin crew have a lot to be proud of with their result. This was the team’s first top 10 on a road course since Charlie Kimball finished 10th at Portland in 2019. Carlin is a single-car team with a still-developing engineering program and after success in various European open wheel formulae, IndyCar success is the next objective, but condensed weekends have not helped the team.

“We’re at these shortened weekends where we get less practice, it really hurts,” Chilton said. “But luckily this weekend we got three practices and I think that might’ve helped the difference. This is definitely a track I like, I’ve qualified seventh here twice with Ganassi, so it just all fell into place and bring on the next one!”

Chilton and the Carlin team will be looking for even better results at Mid-Ohio Sports Car Course in two weeks. In 2018, Chilton qualified sixth there for Carlin in their first appearance in the Firestone Fast Six in qualifying. The motivation for the team is high after being reinvigorated at Road America.

“It’s like trying to get your first win, I know that sounds crazy because at Ganassi I regularly got top fives, top 10s, led the Indy 500 for more laps than anyone (in 2017) but after a while you start doubting yourself,” Chilton said. “You know, Kevin (Magnussen) last weekend in IMSA, that was I believe his first win for seven years, Marcus (Ericsson) when he got his win, that was his first win in years and when he got that podium a couple of years ago at Detroit that was his first time on the podium for years.

“I know this is only a 10th, but we are a single car team up against some big, big teams, that means something, and for me it’s rewarding. Regularly you just don’t get rewarded I would say motorsport’s got a lot of lows and very little highs and we’ve had very little highs the last few years and that for us is a big high.”