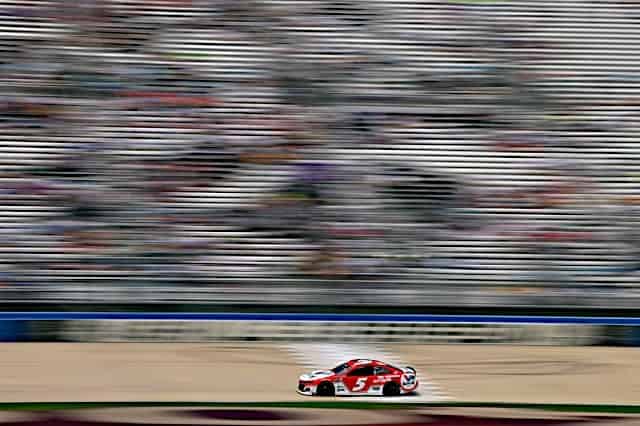 Kyle Larson is on the kind of run that doesn’t happen very often in NASCAR Cup Series racing. Dominance is frequent but it usually comes in the form of a driver winning many races in a year. The suffocating stranglehold of winning one race after another for weeks on end is a whole other level. That’s where Larson is now. It seems that the only thing that might derail Larson is himself. An even crazier thing is the driver of the No. 5 car probably could have won a few more races had things gone his way.

The most dominant season in the modern era of NASCAR came 23 years ago in 1998. That year, another Hendrick Motorsports team won 13 races and finished worse than eighth just five times. It is a bit early to say how close Larson can come to the accomplishments of the driver he grew up cheering for, but the similarities between the two seasons to this point are somewhat remarkable.

Needless to say, Larson has provided plenty of notable numbers of late. Here are a few from last weekend’s Music City mauling.

Larson has finished first or second in eight of the 17 races this year, including the last six in a row. In this category, he actually has Gordon beat at this point in the year. The rainbow warrior only had two runner-up finishes through the same number of events in his record smashing year, giving Larson the edge in that category so far.

Larson has been running at the conclusion of all but one race in 2021. By comparison, Gordon had two DNFs in his first 17 starts in 1998. However, he finished every event in the second half of that year and never ran lower than seventh at the checkered flag. So Yung Money still has a long road ahead of him if he’s going to challenge Wonder Boy in that category.

There were some other drivers doing interesting things on Sunday besides that Larson guy. It was a big day for several drivers who needed a good showing. Six of the top eight at the checkered flag are winless in 2021. Perhaps if someone in particular wasn’t hogging all the glory for himself, there would be a few different faces adorning the winner’s circle.

Martin Truex Jr., Denny Hamlin and Kyle Busch all finished outside the top 10 on Sunday. It was just the second time such an occurrence took place on an oval besides Talladega since the trio became teammates. The only other such instance was the May 2019 race at Kansas Speedway. Fortunately for Coach Gibbs, Christopher Bell carried the flag for JGR, finishing ninth.

Aric Almirola finished fourth on Sunday, his first top five since he was fifth at Bristol last September. But Almirola isn’t the only one at Stewart Haas Racing who is struggling. Neither the No. 14 or No. 41 have finished in the top five in the past 11 months. Even last year’s winningest driver in Cup, Kevin Harvick, is riding a victory-free streak that stretches back to that same race at Bristol in the fall of 2020.

Speaking of Harvick, the 2014 series champion hasn’t won in the past 24 races. The last time he went this long between trophies was a 24 race drought in the middle of the 2015 season, his longest since joining SHR. If he doesn’t win next week at Pocono, it would be his longest drought in nearly 10 years.

Wish Gibbs cars were better. Then it would be the Kyle and Kyle show. But the lower horse power will slow Larson down.