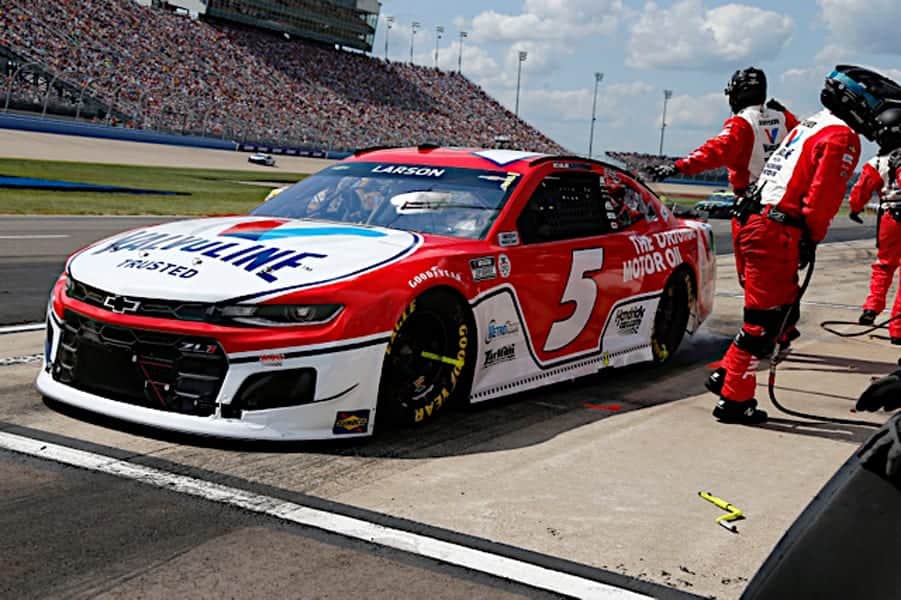 Who … should you be talking about after the Ally 400?

Kyle Larson proved again Sunday (June 20) that the No. 5 team is no fluke. Larson led a whopping 264 of 300 laps at Nashville Superspeedway and was rarely challenged up front in the track’s NASCAR Cup Series debut. Larson’s fourth win of the season adds to a strong 2021 for Hendrick Motorsports, collecting eight wins in the season’s first 17 races.

Behind him, Ross Chastain played his fuel mileage cards just right. After a miserable start to the year, Chastain has come alive with three top 10 finishes in the last four races. His Chip Ganassi Racing teammate Kurt Busch finished inside the top 10, too, even though he ran out of fuel coming to the checkered flag.

Are both men riding the coattails of recent HMS success? It hasn’t always worked out for them, as two mechanical failures at Charlotte Motor Speedway briefly stifled momentum for this duo. But after getting an apology from the Hendrick Motorsports engine department, they’ve used Hendrick power to score two top 10s in a row.

Honorable mention: After a last-place finish at Sonoma, Ricky Stenhouse Jr. turned his season around in a big way. Running second to Larson for much of the race, he snagged a sixth for his second top 10 of the season (Bristol Dirt Race). The run was Stenhouse’s best on pavement since Dover International Speedway last August, Nashville’s sister track. Now 18th in the championship standings, just 43 points behind Buescher, a postseason bid remains a possibility if Stenhouse can go on a run.

What … is NASCAR going to do with the Nashville traffic jam?

Prior to the start of the Nashville Cup race, traffic getting into the track was reportedly a major headache. Delays got so bad, some fans pled with NASCAR to move back the start time to ensure they’d be able to reach their seats. The sanctioning body did listen, delaying the race by about 10 minutes, though several fans were unable to make it in by the green flag.

Sunday’s not the first time a NASCAR Cup Series racetrack dealt with traffic problems in their debut. In 2011, Kentucky Motor Speedway had fans waiting hours to get into the track, several turning away when it was evident they wouldn’t get there until well after the race’s halfway point.

With new tracks coming up on the schedule, NASCAR needs make sure parking and traffic outflows are adequate for fans. That includes working with local authorities to ensure proper infrastructure exists to handle tens of thousands descending on your speedway.

Ya’ll…. Trying to get into the track, I’ve been turned around 6 times onto back roads, I have a baby kicking my bladder, have to pee, have no service. I’m not ok these are real tears. Going motorhome shopping when we get home pic.twitter.com/pf0nA5DKDo

Where … did the other key players wind up in the Ally 400?

Pole sitter Aric Almirola has had a rough 2021 season, but qualifying provided a much-needed confidence boost. He hadn’t started in the top 10 since the Daytona 500, largely due to the lack of on-track qualifying this season.

While he was shuffled out of the lead on the initial start, Almirola did lead a single lap under the second caution of the day. By the time the checkered flag flew, the driver of the No. 10 Ford was fourth, his best finish this year.

Defending champion Chase Elliott started sixth and used a bit of pit strategy to win stage one. He stayed near the front, running inside the top five for a large chunk of the race. However, a loose wheel killed off Elliott’s speed in the final stage, sending him slipping back to 13th in the closing laps.

Post-race inspection sent things from bad to worse. Five loose lug nuts were found on the No. 9 Chevrolet, which resulted in a disqualification and a drop to 39th place in the running order.

Once the green flag dropped, Larson wrestled the lead away from Kyle Busch after just five laps. From there, it became clear the No. 5 Chevrolet was the one to beat once again. And while Larson did have to face a mid-race issue with multiple pieces of debris clogging the front grille, some fancy aero work with the help of JJ Yeley was enough to clear the issue.

The win is Larson’s third straight points victory and his sixth consecutive top-two finish, dating back to Mother’s Day weekend at Darlington Raceway last month. He also moves to within 10 markers of Denny Hamlin for the point lead, a spot the driver of the No. 11 Toyota has held since the second race of the season at the Daytona International Speedway road course.

Why … is Kyle Larson flipping the “17 different race winners in a season” script?

It’s not going to happen. Fast forward a few months later and Hendrick Motorsports has captured the last six race wins in a row (including the All-Star Race). Upsets have been harder to come by as NASCAR gets more competitive. And this type of streak is a rarity within the sport. Even with last year’s commanding performances by Denny Hamlin and Kevin Harvick, neither one strung together three straight wins.

Michael McDowell and Christopher Bell produced surprise victories to start off 2021. But since then, things have quickly reverted to the norm in a Cup Series where the cream has risen back to the top.

How … is Nashville positioned for Cup races going forward?

After a 10-year hiatus from NASCAR, Nashville Superspeedway was brought back from the dead to host all three top stock car series this weekend. Tennessee has long been a breeding ground for the sport’s biggest stars, producing all kinds of drivers from two-time Daytona 500 winner Sterling Marlin to four-time Cup winner Bobby Hamilton. The revival of the Superspeedway has also accelerated talks about bringing back the Nashville Fairgrounds.

I give the track’s return a spicy Nashville Hot rating, not a Nashville Inferno, though. There were hiccups along the way, including Larson’s dominance up front, but the racing product was good by providing consistent side-by-side competition throughout the pack. A sold-out crowd witnessed new NASCAR memories in Nashville and the numbers make the track well-positioned to host Cup races for 2022 and beyond.

What are the standings in the NASCAR Series Race as of now? After Nashville yesterday.

Look it up on jayski.

The fact that NBC was willing to show competition farther back in the field kept me invested in the race. Just showing the top runners, especially with one car dominating, does not make me want to watch every minute of copetition. well done NBC.