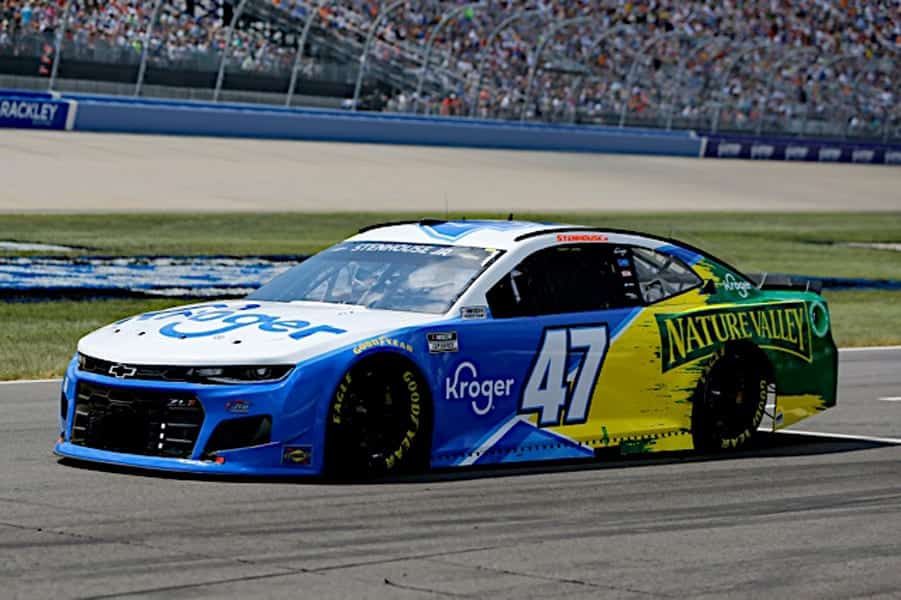 Ricky Stenhouse Jr. was one of the biggest surprises of Sunday’s race (June 20).  In the first visit by the NASCAR Cup Series to Nashville Superspeedway, Stenhouse had a fast car all day long.  The JTG Daugherty Racing driver was able to drive up into the top 10 and top five on several occasions, running as high as second behind Larson.

Slow pit stops prevented the No. 47 from being a bigger threat late in the race despite front-running speed. Nevertheless, Stenhouse fought back over the last green flag run.  After making a pit stop during the final caution period on lap 229, his Chevy had more fuel than most of the other drivers inside the top 10.  Stenhouse was able to climb all the way back to sixth by the time the checkered flag flew.  It was only his second top-10 finish of the season.

The strong result helped Stenhouse’s quest to reach the playoffs.  A bad day from Chris Buescher, the current playoff bubble driver, allowed him to close to 43 points below the cutline.  With nine races to go before the postseason begins, Stenhouse finds himself 18th in the Cup season standings.  The only driver between Buescher and Stenhouse is Kurt Busch, with whom Stenhouse battled for position in the closing laps.  If the JTG Daugherty Racing driver can secure a few more strong finishes like he had on Sunday, reaching the playoffs on points is feasible.

The problem is the next few races do not favor him.  Pocono Raceway is well known as the Tricky Triangle, but the big track in the Pennsylvania hills has been a nightmare for Stenhouse.  In 16 starts at Pocono, he has never had a top-10 finish there.  After that is Road America, where Stenhouse does have some experience competing in NASCAR’s second-tier division.  However, the Cup Series provides a whole different level of competition.  Having never scored a top 10 at a road course in Cup, Stenhouse has a big challenge ahead of him not just at Road America, but at Watkins Glen International and the Indianapolis Motor Speedway road course later this summer.

Stenhouse is in his ninth season as a full-time Cup Series competitor, but he has only qualified for the playoffs once.  That was back in 2017, the same season in which he earned both of his Cup wins.  Breaking through for a victory at Talladega Superspeedway in May, Stenhouse took the checkered flag in the very next restrictor plate race at Daytona International Speedway in July.

But since then, success in NASCAR has eluded Stenhouse.  He and Roush Fenway Racing parted ways at the end of 2019, leading him to his current ride with JTG Daugherty Racing.  Stenhouse and the No. 47 team largely struggled last season, finishing 24th in points.  The 2021 season has been an improvement so far, despite the lack of top 10s.

Just like Stenhouse, JTG Daugherty has only been to the playoffs once.  That berth came via AJ Allmendinger’s only victory at the Cup level, at Watkins Glen in 2014.  Seven years later, Allmendinger’s triumph is still the team’s only win.  Suffice it to say that a victory before or during the playoffs would feel sweet for both Stenhouse and the No. 47 team.

A win by Stenhouse and JTG Daugherty might also provide some direction for the team’s future.  Neither the driver nor the team has disclosed the exact length of Stenhouse’s contract, although it is possible he could be in the final year of his current deal.  Scoring a win, or even reaching the playoffs, would give Stenhouse and JTG Daugherty all the more reason to make longer-term commitments to each other.

There is even more uncertainty surrounding teammate Ryan Preece and the No. 37.  JTG Daugherty opted to run Preece’s team as an open car this year.  While the No. 37 has not missed any points races, it is still possible the car may not have enough sponsorship to run the full season.  What happens beyond 2021 is anyone’s guess.  Preece, who won the Camping World Truck Series race on Friday night, may seek opportunities in the lower divisions even if JTG Daugherty remains a two-car team in 2022.

If Preece’s team were to get shuttered, having JTG Daugherty’s sole focus on the No. 47 could give Stenhouse a boost.  Yet it might be too late even for this year.  The reason that Stenhouse was such a surprise at Nashville is that the No. 47 rarely has that much raw speed.  Stenhouse has only led multiple laps in one race this season, at Kansas Speedway, which ended with him spinning out late and finishing in the back of the pack.

At the Bristol Motor Speedway Dirt Race, his other strong performance this year, Stenhouse was fast but got stuck in traffic. He simply ran out of laps to catch eventual winner Joey Logano and couldn’t capitalize on a green-white-checkered finish, running second.  Even on days when Stenhouse runs well, poor execution or unfavorable circumstances always seem to hold him back.

So, while Stenhouse may have the playoff cutline in his sights, he still feels like a longshot to qualify on points.  Given the difficulty of the schedule ahead, and the No. 47’s struggles to put complete races together, collecting enough points to close in on the bubble will be difficult.

The best bet for Stenhouse and JTG Daugherty is to win Daytona, the last race of the regular season.  Such a win would arguably be the biggest of Stenhouse’s career, and it could set him up for future success with JTG Daugherty.  But if the playoffs begin once more without Stenhouse or the No. 47, it would be harder to imagine the team staying together in 2022.

Yes he did win both superspeedway races in ’17. But that seemed to prompt him to come out in the next year’s Daytona 500, & drive like a maniac. Since then earned, or unearned, he’s since developed a reputation as wreck prone. Which reportedly played a part in his dismissal at Roush. He was having a solid year in the 47, then it kind of went off the rails. He needs to prove he can keep his car clean, & get what the car, & pit crew allow him to have.
Lets hope Nashville wasn’t a one off.