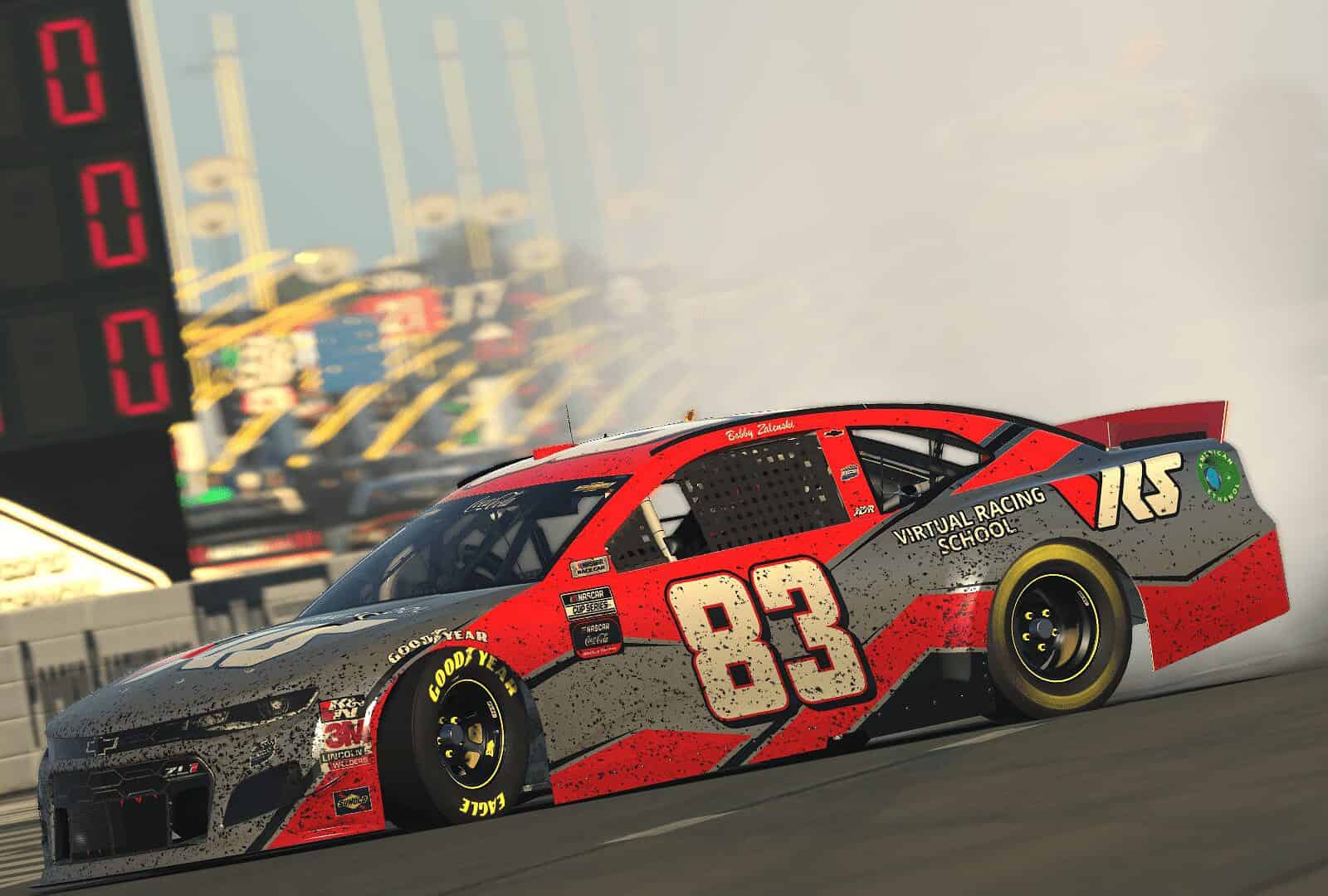 After a month-long break from action, Bobby Zalenski won Tuesday (June 22) night’s eNASCAR Coca Cola iRacing Series event at the virtual Pocono Raceway. The storyline heading into the race was the draft and how the cars would race with Pocono’s long straightaways…which the race saw in full effect.

“This is fantastic,: Zalenski said after the win. “I told you I was winning this. I had a friend up front in Mitchell [DeJong], been friends with him for years so that was really helpful—going to have a battle next week with him too at Road America.”

This win also locks him into the playoffs, as he becomes the 10th different winner in 10 races this year.

Defending champion Nick Ottinger started out front, and was looking to score his first win of this 2021 season. He was caught up in an incident and finished last after leading the opening stint of the 90-lap event.

Also making news prior to this event was the departure of Kligerman Sport driver, Isaac Gann. Gann was forced to withdraw from the series due to some medical issues and had to give up his No. 44 ride. Anthony Burroughs made his debut for the team and had a respectable race.

With the aero update to the Cup car on iRacing since the previous race, it unfortunately made the racing more single file than ever. While there were several lead changes, it appeared to be very difficult to make passes all night. Three- and four-wide racing on restarts made it possible, but just like in real life, it was not very easy to make passes on anyone after about five laps.

A notable stat of the night, coming from Steve Luvender via Twitter, was from Brad Davies, driver of the No. 88 for JR Motorsports. After taking the lead early on from Ottinger, he was looking to win his first race in over 3,500 days (just under 10 years to be exact). He showed speed all night, but unfortunately ended up near the back of the field.

Green flag pit stops shook up the field as the race went on, as they do in races like this one with long runs under green. Dominant drivers at the beginning, such as Michael Conti, Davies and Ottinger all fell back as strategy began to take over. New players like Steven Wilson, Zalenski and DeJong were among the front few who would lead the field after things cycled around at about halfway.

Points leader Keegan Leahy had a solid race until he was spun with 19 laps to go and was relegated to a poor finish. As the field approaches the playoffs, points are becoming more and more important. Michael Guest came into the night second in the standings, but does not have a win. With the variety of winners, not having that elusive win could become damaging. Guest has been fast enough to win races this year, but hasn’t been able to break through yet.

Racing has been phenomenal in the series this season, but was this race the most lackluster so far? It does seem like that, but strategy added into the entertainment of the event. Fuel mileage, tire strategy and late restarts have all been extremely important factors in these races and tonight was no different.

The restart with 15 laps to go changed everything, with Zalenski showing his strength after muscling his way out front. Strategy put Brian Schoenberg in contention for his first career win as well. The veteran has been in the series since its inception in 2010, but has never visited victory lane and that streak continued at Pocono.

The race turned into a wreckfest near the end, with only a handful of green flag laps being run after the long stint to begin the race. Over half the field seemed to be collected in wrecks as it came down to the end. This allowed Zalenski to get the restarts he needed to win.

The next race for the series takes place next week (June 29) at virtual Road America. Coverage begins at 9 p.m. ET on eNASCAR.com or Twitch.tv/iRacing.