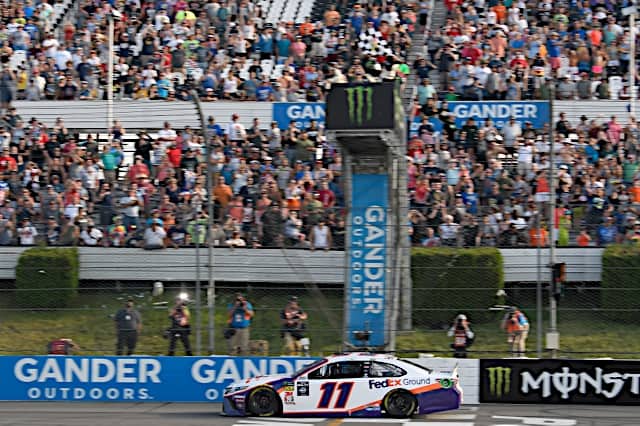 With Pocono being a doubleheader weekend, if successful, could it mark the start of a trend to shorten the NASCAR schedule? – Daniel P., Philadelphia, Pennsylvania

I hope so, to be honest. I’ve long been a proponent of NASCAR shortening the schedule (and the individual races).

No disrespect to the fine folks in Texas and at Texas Motor Speedway, but the days of anybody in their right mind wanting to watch 500 miles of Cup racing at TMS (twice!) have been long gone. Same goes for any 500+ mile race outside of the Coca-Cola 600, Southern 500 and Daytona 500, A.K.A. the crown jewels.

NASCAR used to be about the ultimate test of man vs. machine. It was before my time, but parts, pieces, engines and, heck, drivers, couldn’t last that long. Now they all can and then some. So the test of machinery vs. the length of a race is no longer a test. It’s a certainty that all will hold up.

Doubleheaders accomplish a few things. They a). shorten the schedule, b). give fans more bang for their buck and c). allow NASCAR more flexibility in scheduling, which they’ve shown a bigger propensity to change in recent years.

With the Tokyo Olympic games happening this summer, NBC and NASCAR have a two-week break in the action to allow for the games. That won’t normally be factored into the schedule, given that happens once every four years. But for a sanctioning body that has long mumbled about wanting to avoid going head-to-head against the NFL in the fall, any way to shorten the schedule, they’ll likely take.

But the tough task is for it not coming at the expense of most of the races. The norm of 36 races is a plentiful number, but 30 may be too little for traditionalists, who you don’t want to alienate any more than you already have, right? So perhaps cutting three or four races to land at 32 or 33 points-paying races is the sweet spot.

Alright: that takes us to, in a non-Olympic year, the end of October. That’s almost two months into the NFL season. For argument’s sake, let’s say no playoff races are doubleheader weekends, leaving a 10-week slate to crown the champion. But it’d be easy to duplicate Pocono to a track like Atlanta. Or even run the Daytona Road Course on Saturday and the regular season finale at the superspeedway on Sunday.

And who’s to say what other schedule tweaks the sanctioning body may make? It may be a pipe dream, but would fans accept a doubleheader weekend at Nashville Superspeedway and Nashville Fairgrounds? I mean, I don’t see why they wouldn’t.

Bottom line is this: the more doubleheaders, the shorter the season is. And you don’t give the fans any less racing (which I’m sure they’ll complain about anyways). Who’s to say what the 2022 schedule looks like and for years beyond. But if Pocono’s DH weekend with fans goes off without a hitch, we could be looking at the future right before our eyes.

What are realistic expectations for Sam Mayer as he hops in the No. 8 seat this weekend for JR Motorsports? – Arlene H., Madison, Wisconsin

Realistically, they’re to compete for wins, but not necessarily win right away.

But for Mayer himself, they’re to win multiple races, contend alongside Ty Gibbs, Austin Cindric, A.J. Allmendinger and more.

Sam Mayer on his first Xfinity Series start: "Going out there on wrecking on the first lap would look really, really bad…just going out there and running all the laps. I guess my expectations are what I put on myself. I feel like I'm a top 10 driver." #NASCAR

The soon-to-be 18-year-old is not short on confidence, and why would he be? A two-time and defending ARCA Menards Series East champion, Camping World Truck Series winner and JR Motorsports late model alum to boot, he’s accomplished a whole heck of a lot in not that much time.

Couple that with his ultra-competitiveness (he wants to beat Ty Gibbs bad), the performance of the No. 8 car so far this year (Josh Berry winning at Martinsville and running up front weekly) and his anxiousness while waiting in the wings to hop in the car once he becomes of age, Mayer is sure to impress.

I would say that there’s no chance he wins at Pocono this weekend (when he makes his first start on his 18th birthday), but I also said that about Gibbs at the Daytona Road Course earlier this season and, well, we know how that went.

So Mayer can for sure win. I don’t think he will, necessarily, but that doesn’t mean he won’t wow the competition and make them do a double take thinking he’s Ty Gibbs. But he’s not. Just another teenage sensation that will be around for years and years to come.

Sure, he’s always been in some of, if not the best, equipment in the field at every level. GMS K&N/ARCA cars and trucks, JRM late models and…that’s really it. Because he hasn’t done much else in NASCAR due to his age. But in Trans-Am cars, he also has found Victory Lane multiple times on road courses and, while successful on ovals, he’s honing his craft and improving on areas he needs to.

Gibbs may have done it first and beat Mayer to the punch by a few months, but don’t be surprised if Mayer wins soon in Xfinity despite his inexperience.

No way! The cars are more durable and the parts last longer. What people need to do is get their heads out of their cellphones (and stop paying that $100 a month bill) and buy tickets. Races should be longer without stages so it can truly unfold. I want practice and qualifying back so the value of my ticket I purchase is more. 36 races is a good number (although it used to be 30, 28, 32, etc) because I need MY sport to be different from stick and ball sports. Double headers are okay, but they should be doing 2 500 mile races instead of these dinky 300 milers (I don’t even have time to grill out and enjoy it).

I have not ever and do not now support double header weekend races! NASCAR DOES NOT NEED TO COPY other racing series! Doing that is one of the MANY reasons why NASCAR is the total mess that it is today! Leave double headers and shortened races (as well as road-racing and street-racing) to those indy things! This is NOT what stock car racing is suppose to be about! All of this and the gimmicks that NASCAR has used have run almost all of the stock car racing fan base away! If NASCAR had not tried to fix what was not broken, there would not be this conversation today!