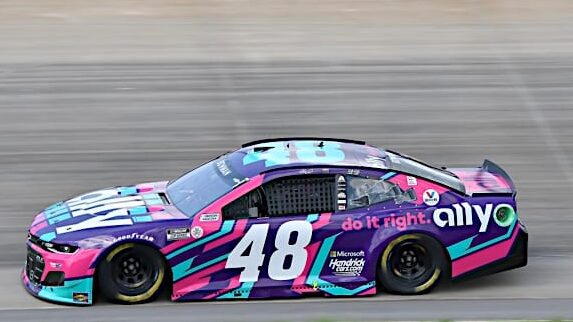 When Alex Bowman‘s No. 48 Chevrolet took to Sonoma Raceway on June 6, it did so with a special decal, one that sponsor Ally Financial shared on Twitter.

With a rainbow-colored “a” above the phrase “better together,” the emblem commemorated Pride Month.

Frontstretch asked Andrea Brimmer, Ally’s chief marketing and public relations officer, Saturday (June 19) about the importance of the decal to the company that sponsors Hendrick Motorsports.

Brimmer, whose youngest son is gay, said the decal was “deeply personal” for her.

“I think that there has been a big focus by NASCAR to increase the amount of diversity in the sport,” Brimmer said at press conference promoting Sunday’s (June 20) Ally 400 at Nashville Superspeedway. “It’s something that [track president] Erik [Moses] and I have talked a lot about, and will have a big emphasis on as we go forward here on the Ally 400.

“And so being able to have that that logo on the car was awesome for us.”

But Brimmer doesn’t want to stop with a decal.

“I’d love to get to the point over time where maybe we can run [a] Pride scheme at Sonoma, which I think would be awesome,” Brimmer said. “Those are some of the kinds of conversations that we’ve been having with Alex and the folks at Hendrick. A lot of push on our part to continue to diversify the fan base that’s coming out to the tracks.”

Since NASCAR took a very public open stance against racism last June, social justice and inclusivity has been at the forefront of the sport’s campaign to attract more fans.

That’s included partnering with organizations like The Trevor Project, a non-profit focused on suicide prevention efforts in the LGBTQ community.

Ally made its stance on inclusivity known last year when it got involved with Noah Sweet, a Jimmie Johnson fan and designer of concept NASCAR schemes who goes by the nickname “Lefty.”

Sweet received backlash and harassment after posting a design on social media of the No. 48 car in a Pride scheme. It forced Sweet off social media while he was in a seven-day program of inpatient care.

Brimmer and Ally eventually “caught wind” of the situation, thanks in part to a campaign in support of Sweet under the #WeLoveLefty hashtag.

Ally surprised Sweet with a Zoom meeting with Johnson and the opportunity to design the car for his final career start at Texas Motor Speedway.

“That was an awesome moment for me,” Brimmer said. “We’re definitely pushing really hard, [for] more and more inclusion of just more different kind[s] of people in racing, not just the same old, same old.”

Brimmer said conversations around social justice and inclusion in the last year have “created this tipping point of momentum now that even places like NASCAR, which has traditionally been very similar in terms of the demographic, [are] really starting to expand and become more friendly … I mean, look at having a track president [Erik Moses] that’s African-American, and us being able to be associated with this race and the things that we’re being able to do. Putting Pride logos [on cars] like these are conversations that never would have happened in the past. So I think we’re just at the starting point. But from our standpoint, as a brand it’s going to be something we’re going to be really pushing on as a sponsor.”

“There are very focused things that we can do around making sure there’s more Black and brown faces in the stands of these races and ensuring that the inclusivity is felt,” Brimmer said. “I think the whole conversation around Pride is another big area. Running a Pride scheme would be epic, frankly. And being able to do something like that in NASCAR and to start those conversations would be incredible. So I think it’s just kind of a slow drip of start doing things and see where it goes.”

Over the weekend, Hendrick Motorsports announced an extension that will keep Bowman and Ally with the No. 48 through at least 2023.

“Obviously, diversity and inclusion is really important to Ally but important to all of us here and everybody in NASCAR,” Bowman said. “So anything, we can do to show that is cool.”

As for why Sonoma Raceway would be the ideal track and market for a Pride scheme, Brimmer said “I think the atmosphere, the California market is more accepting, more open. It just feels like the right place to us.”

While Brimmer is “not committing 100%” to a Pride scheme next year, she said there’s “a lot of openness at Hendrick” about the prospect.

“I’m really hoping that maybe as NASCAR is embracing Pride more, we saw a much larger push from NASCAR this year around Pride and Pride Month, that there will be more and more appetite to do it,” Brimmer said. “The great thing about Hendrick is it’s such a good partnership that they’re basically like, ‘It’s your car, if you want to run it, let’s run it.’ So as long as Alex is comfortable with it, I’d really like to do something like that next year.”