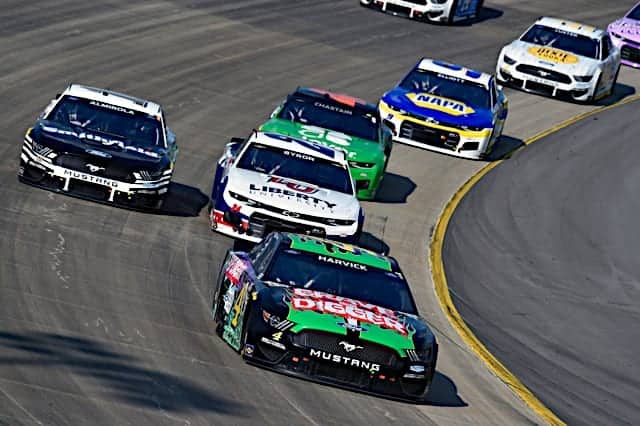 That Stewart-Haas Racing has had a dismal year is no breaking news.

Perhaps, though, the organization’s run at Nashville Superspeedway finally provided a turning point.

Aric Almirola‘s miserable season had a sizeable uptick in performance by claiming pole position in a rare qualifying session and managed to translate that into a fourth-place finish. Meanwhile, teammate Kevin Harvick managed a solid day and came home fifth.

Second-year driver Cole Custer and his rookie teammate Chase Briscoe were each having strong top-15 runs, but late mechanical issues relegated the duo to 30th- and 31st-place finishes, respectively.

Harvick has headed the program’s flagship team for over half a decade now, so his performance isn’t exactly surprising. But when you consider how well his three teammates ran Sunday (June 20) at Nashville, it’s difficult to dismiss the jump in execution.

Briscoe, Custer and Almirola sit 26th, 27th and 28th in points, respectively. SHR’s production has been objectively awful. For Almirola to come home fourth after averaging a sixth-place running position all day could be an enormous boon as the regular season sits nine races away.

See also
Beside the Rising Tide: And Then There Were 9

“It means we’re working hard,” Almirola said of all SHR cars showing speed. “We’ve had a lot of races where the 4 [Harvick] has been a 10th-place car and the other three of us have run 25th it seems like, so we’ve been working so hard. When you run bad, it’s 10 times as much work because you’re going down every single different avenue trying to figure out what’s gonna make speed in the racecars. And when you have fast racecars, it’s easy because you just massage on it and polish it and keep going to the racetrack with what you know is fast.

“We’ve been working so hard. I’m proud of everybody back at the shop and specifically this 10 team. We’ve been off and it’s been nice to get it back and go on here in the right direction after two weeks in a row of running up front [including the exhibition NASCAR All-Star Race].”

It’s clear, though, that the team is far from out of the woods. Nashville provided a unique opportunity – a new venue that had never hosted a Cup Series race, an odd intermediate of an intermediate track at just 1.33 miles, a concrete surface and a resin on the racing surface. In short, no one had a notebook to truly gauge expectations.

The one guarantee was that Hendrick Motorsports would remain fast. Kyle Larson proved that yet again by scoring his third consecutive points win and fourth in a row if you include the All-Star Race.

“We had a good car, just, my goodness, we don’t have anything for those Chevrolets right now,” Almirola said. “They’re making grip and they’re getting up off the corner. It’s so hard to race with them. I can roll the center as good as some of the guys in those cars, if not a little better, and then it’s tough to keep up.

“But we have made huge strides to close the gap. Our race team is doing a great job scrounging and scrapping to build better race cars and it’s nice to come here and run up front, run in the top five and at least be in the mix.”

SHR’s Fords lagging behind Chevrolet isn’t the company’s only problem. Struggling behind one manufacturer shouldn’t relegate a championship-contending four-car operation to having three cars outside the top 25 in points 17 races into the season.

So what’s the fix? How does SHR wrench its way back into contention with all four cars?

There’s no easy answer, obviously. Inexperience in two of its four cars in the form of Briscoe and Custer can’t offer much help, particularly with a severe lack in track time without regular practice. Almirola has largely been a mid-pack driver much of his career, though showed signs of strength as recently as last year, when he totaled a career-high 18 top 10s in 36 races.

Harvick has always been in a league of his own at SHR since joining in 2014 and winning that year’s championship. Even when the roster consisted of himself, Stewart, Kurt Busch and Danica Patrick, Harvick was the clear-cut best of the four.

Just three years ago, the team placed all four cars in the playoffs with Harvick, Busch, Almirola and Clint Bowyer.

Harvick won nine races last season but has won zero since Sept. 19, 2020, when he won the playoff race at Bristol Motor Speedway. A rebound for him is likely, but it’s fair to start asking when.

The pressure is on, though, for his three current teammates. It’s hard to rebound when your season peaks have been mediocre to begin with.