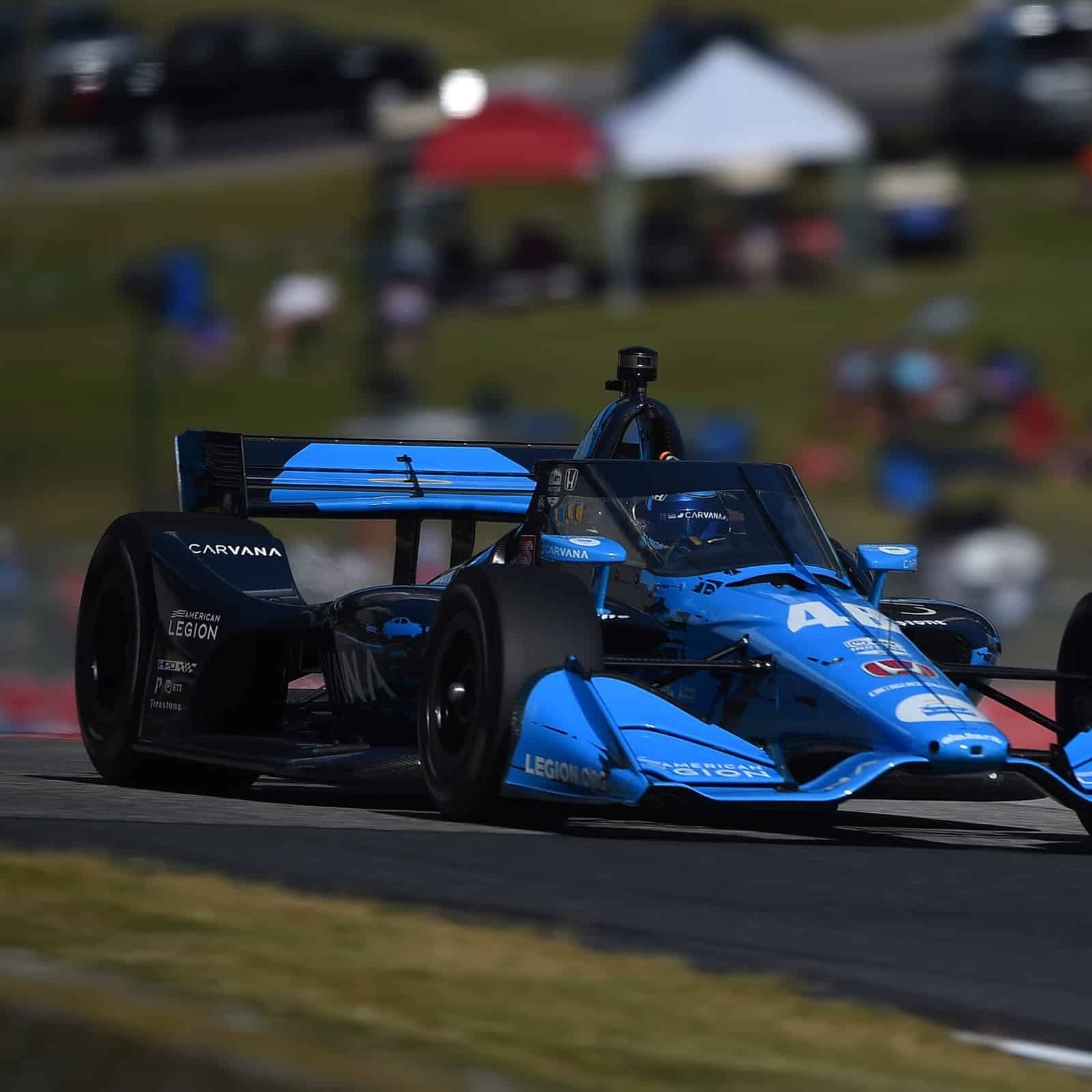 Road America’s 14 turns across its 4.014 mile layout provides NTT IndyCar Series drivers with a flowing, fast circuit upon which to drive. For a rookie, Road America can be a daunting task, and for Jimmie Johnson, the Wisconsin circuit was just that.

Sunday’s (June 20th) REV Group Grand Prix was 55 laps of racing won by Alex Palou, and while the Spaniard had his own challenges with trying to beat Josef Newgarden, Johnson was still coming to grips with the circuit.

Johnson finished 22nd, the first car not on the lead lap. The No. 48 Chip Ganassi Racing Honda lost a lap after Johnson spun his car coming out of turn 7 on lap 16. From then on, Johnson was stuck far down the order, only advancing positions when Kevin Magnussen and Ed Jones both retired from the race with mechanical issues.

But while the race might not have been up to Johnson’s hopes, let’s look at the weekend as a whole.

In the Saturday afternoon practice session, Johnson was 14th fastest out of 25 cars, and until the last few minutes of the session he was sixth quickest. Hopes were high heading to Sunday with Johnson starting 23rd.

Before the first pit stop, Johnson ran as high as seventh while the rest of the field made their first pit stops. After his first pit stop on lap 14, Johnson was readjusting to his car being heavy with fuel again and dropped both left side wheels off course exiting Turn 7.

Johnson hit the wall on drivers’ right with the nose of his car and knocked over a WeatherTech sign. It took over a lap under caution for Johnson to get started again. Johnson would remain the last car in the running order for the rest of the race after Dalton Kellett officially retired from the race. So, with no clear opportunity to gain position, let’s look at lap times.

Johnson’s fastest race lap was 1 minute, 50.4340 seconds, which was 24th fastest out of 25 cars. Adding up each of Johnson’s fastest micro sectors gives us an optimal lap of 1 minute, 48.8592 seconds. Had that been Johnson’s fastest lap, it would’ve been the third fastest personal best lap of the race. However, putting an entire lap together means being good at all different parts of the lap, and going through the micro sectors, there were some areas of the track where Johnson was better than other drivers, particularly on the straights.

Johnson also had the sixth fastest final micro sector time leading to the start-finish line. The verdict? Johnson’s really good on the loud pedal but is still losing time in the corners, whether it’s from braking or not getting back onto the gas pedal fast enough.

We can’t mention the positives without bringing up the negatives. The seven-time NASCAR champion had many micro-sector times that were among the bottom-few best times. In 15 different micro-sectors, Johnson was in the bottom three of the best times through six of those sectors; four of those he was last in.

In just those four micro sectors, Johnson lost just over 1.10 seconds to the best micro-sector time holders in those sections of track. Those sections are the run from turn 2 to turn 3, the start of The Carousel to the exit of The Kink (two micro sectors back-to-back) and Canada Corner.

In going through Johnson’s lap times, it’s clear that getting comfortable with the car took longer than Johnson might have wanted considering that his fastest lap was on lap 42. Part of that might’ve been that practices at Road America aren’t exactly conducive to turning long runs in because of how long a lap around the circuit is. However, Johnson still managed to finish the race and without the yellow, this could have been his first time finishing on the lead lap.

The next NTT IndyCar Series will next race on July 4th at Mid-Ohio Sports Car Course in the Honda Indy 200.

It’s just embarrassing watching Johnson out there. He must be one of those that Will Power referred to as not even belonging on the grid.

No matter the spin that gets put on Johnson, he’s wasting his time and the car owner’s money. The sponsors can’t be happy with the results.

For the last few years, he was an also ran in the series where he was credited with 7 championships.
Not sure how anyone would expect much in the transition to a different discipline.

To add, he is only running street and road courses in Indy Car. He was never exactly a road course standout even in his prime Cup years.