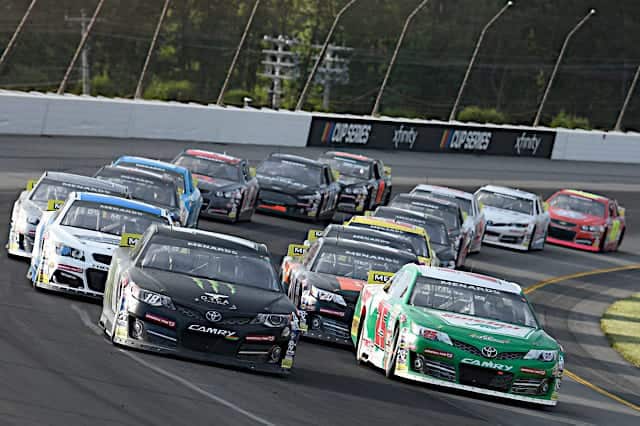 The good news for Gibbs? He has led 70% of the laps so far this season en route to five victories.

What’s the bad news then? This is a talented field with 24 other drivers hungry to end Gibbs’ winning ways.

Chief among those is Corey Heim. Heim still leads Gibbs in the point standings by one point and is the only other driver to win a main ARCA race this year, winning at Daytona International Speedway and Talladega Superspeedway. This will be Heim’s second start at Pocono. In 2019, he started fifth and finished fourth.

In addition to Gibbs, there are five other drivers who will compete in two of the five races this upcoming weekend at Pocono.

Smith and Mayer will both be making their first ARCA start this year at Pocono. Smith was the runner-up to Gibbs at the ARCA Pocono race last year. Smith, a nine-time ARCA winner, will pilot the No. 25 Venturini Motorsports Toyota.

Mayer will make both his first ARCA start this year as well as his Xfinity Series debut with JR Motorsports this weekend. He’ll drive the No. 23 Bret Holmes Racing Chevrolet, his first race with last year’s championship-winning team.

Although he will drive the No. 8 Chevrolet for the rest of this Xfinity Series season sans at Richmond Raceway, Mayer wants to win Friday’s race.

Mayer won the 2019 and 2020 ARCA Menards Series East championships, defeating Gibbs. The two teenagers have raced against each other 21 times in ARCA competition. Head-to-head, Gibbs is up 12 to nine, but both drivers have been successful overall. Gibbs has scored seven victories, 16 top fives and 19 top 10s in those races and Mayer has scored five wins, 19 top fives, and 19 top 10s. Mayer welcomes the opportunity to race against Gibbs.

“Obviously, any opportunity to beat an Xfinity Series driver is huge in the ARCA series for sure,” Mayer said. “I’m sad that it’s only my first ARCA start of the year. I’m going to use the opportunity to its fullest. It’s a good weekend to have my first start because it’s going to help me a lot for the Xfinity Series race on Sunday.”

This will be Wright’s second ARCA start this year. After starting fourth, he spun on the first lap at Mid-Ohio Sports Car Course but fell two laps down. He regained one lap to ultimately finish one lap down in eighth place, not indicative of the speed in his No. 30 car.

“All the oval races for me this year are just learning,” Wright told Frontstretch. “My expectations for this race will be higher because I will have practiced on that track. We haven’t had practice in the Trucks this year except for Charlotte Motor Speedway and Daytona [and then Nashville Superspeedway]. I’m really excited to get track time and then go race the Trucks because I’ve always felt behind this year. It’ll be good though; I’m excited for Pocono.”

See also
Should There Be an ARCA Bounty on Ty Gibbs at Pocono?

Beyond the drivers competing in double-duty this race weekend, three other contending drivers are seeking their first ARCA wins. Kyle Sieg is sixth in the championship standings despite not competing in the Toledo Speedway race. He’ll be running a throwback paint scheme to his older brother, current Xfinity Series competitor Ryan Sieg.

Going with a little bit of a Ryan Sieg throwback look this weekend at Pocono for the ARCA race with @KyleSieg39 behind the wheel. 5 hour test tomorrow along with qualifying and racing Friday. pic.twitter.com/GQ6qFXNOBC

Thad Moffitt is currently third in the points, chasing Heim and Gibbs. He’s seeking his first top 10 at Pocono in his fourth start there.

“My luck at Pocono so far hasn’t been great, but we have had a solid season to date and a lot of speed so I feel better than ever heading into Friday,” Moffitt said in a team release. “We’ll get to turn some laps in the ARCA sanctioned test on Thursday and get the car dialed in for the rest of the weekend. I’m looking forward to getting back on track and contending for a win.”

“I am even more confident going into Pocono than I was going into Charlotte, and we ran P2, even P1 at times, during that race,” Sanchez said in a team release. “I know that this team constantly works every week to give me good equipment, and I am really excited to have the chance of putting this team in victory lane.”

The General Tire #AnywhereIsPossible 200 will take place at 6 p.m. ET on Friday, June 25 with TV coverage provided by FS1.