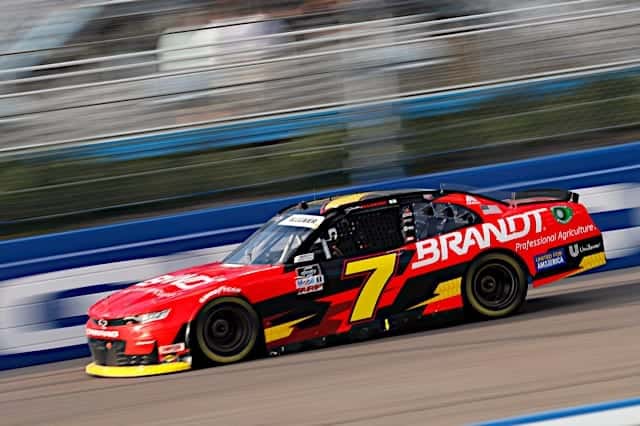 In the past two NASCAR Xfinity Series races, it’s been pretty simple. The best driver in the series not named Kyle Busch has been Justin Allgaier.

If not for Busch having now won 100 races on the circuit, including each of the last two events, Allgaier would likely have found himself on a winning streak heading into Sunday’s (June 27) event at Pocono Raceway.

For that reason, in addition to the races leading into the past two weeks, any conversation about a title favorite has to commence with Allgaier, even if June is not yet complete. Allgaier has shown that his team can race for wins on multiple track types, and that’s a dangerous piece of confidence for opposing teams to confront.

Both had a familiar pattern. Allgaier was good enough to race door-to-door with Busch and pass him late, only to have Busch prevail during late restarts. It’s part of a recent torrid run for Allgaier, who has one win, two second-place finishes and five top-three finishes in the past seven races. Those runner-up finishes, and how close they came to being wins, still linger.

“It hurts a lot not because of being beaten by Kyle Busch, but how we got beat,” Allgaier said. “Being able to pass for the lead under green and losing on a restart, that’s what’s been disappointing. But the days you don’t make it to victory lane, that’s what makes it when you do that much sweeter.”

Allgaier has had some of those ‘sweeter’ moments this year, too, taking wins at Atlanta Motor Speedway and Darlington Raceway with his JR Motorsports teammate Josh Berry having a Martinsville Speedway victory and Noah Gragson being in a position to win earlier this year at Homestead-Miami Speedway.

The other tangible result is that three drivers from JR Motorsports — Gragson, Allgaier and Michael Annett — are in the top 10 in points. Berry is not competing full-time as he’s sharing the No. 8 with multiple drivers.

That success throughout JR Motorsports has hardly been an accident if you ask Allgaier, as continuity has paid dividends.

“That’s one thing I love about this No. 7 team,” Allgaier said. “We have about the same group of guys that we had when I started here, and that allows us to dig ourselves out of the trenches when you feel like you aren’t firing on all eight cylinders. You can dig in, get back in the trenches and get your program back to where it needs to be going.”

It may be hard to believe now with Allgaier’s recent tear, but there was a time this year when Allgaier and his team indeed needed to dig themselves out of those proverbial trenches. Through the first five races, Allgaier crashed out of two events and had a best finish of eighth, his only top-10 finish in that span.

“In the beginning of the season, I’ll be honest with you, I was ready to throw in the towel,” Allgaier said. “Everything seemed to be going wrong, we just didn’t have what we needed to have.”

But in a testament of how important the depth of an organization is, the No. 7 team has hit its stride.

“The Hendrick Motorsports engine shop and Chevrolet have just been doing a fantastic job of making our program better,” Allgaier said. “We talk all the time about trying to outwork everyone else, but we’ve been fortunate to have the right people and procedures in place.”

There’s no greater proof of that than in recent weeks.

It’s not just that Allgaier has posted multiple finishes near the front. It’s that it has happened on multiple layouts. There was the win at Darlington Speedway’s oh-so-unique shape, the finishes near the front at Circuit of the Americas and Mid-Ohio Sports Car Course, stout showings on concrete at Nashville Superspeedway and Dover International Speedway along with muscle-flexing at intermediate venues such as Texas Motor Speedway and Charlotte Motor Speedway.

You never, never, never want to sew anyone up as a title favorite before July 4 even arrives. Just ask Chase Briscoe last year. But the fact that Allgaier can run near the front at various tracks? That’s a combination of momentum and experience that should play a big role come playoff time.

“When you look at the schedule in years past, there’s been a lot of teams and drivers that were one-trick ponies, and I feel that’s been us a little bit. We’d be good on short tracks and OK everywhere else,” Allgaier said. “One thing I love about 2021, it doesn’t matter where you go. We’re not just able to be competitive, but I feel like we’ve been able to be at that upper end. That’s a feat that I hope our guys don’t take lightly … the key to all of this is having four cars each week capable of winning a race, and there’s a lot to be said of that. Hopefully, we’re not peaking too early.”

What To Watch This Week…

Next to break through?

If you’re thinking of a driver who’ll be next to get his first win of the season, Harrison Burton is one to keep an eye on. For Burton, it’s simple. He and the No. 20 car need some love from good ol’ lady luck. Being in place to win has not been an issue for Burton. Having things fall the right way, however, has. In the past four races, he’s finished third twice but also be involved in on-track incidents. It does not help either that he has an ARCA Menards Series win at Pocono, as well.

“Mama, there goes that man again..”

Ty Gibbs is only running a part-time schedule this year in the Xfinity Series. That’s good news for drivers in this series given his track record of two wins in seven races plus having a bona fide chance to win two more times, including his last time out at Mid-Ohio.

The bad? He’ll return this weekend. In addition, given Pocono’s three unique turns, it lends itself to driver ability that’s also strong on road courses. Gibbs is one of three drivers with two top fives on road courses this year alongside AJ Allmendinger, Brandon Jones and Austin Cindric.