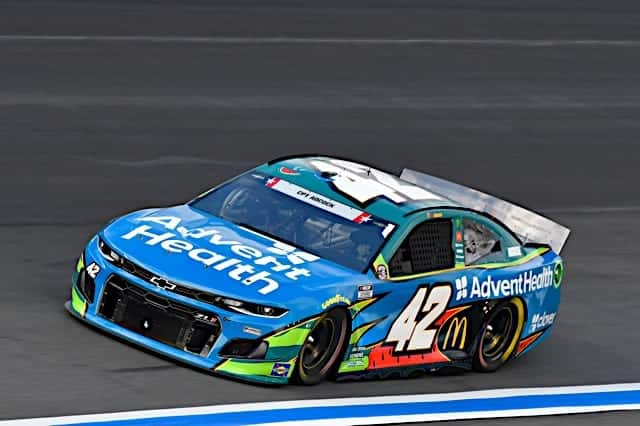 I watched a few YouTube videos of old NASCAR Cup Series races the other day. I don’t do this often; when it comes to sports, I tend to prefer to live in the live sports moment rather than rewatching old events where the outcome’s already occurred. But, you know, rabbit holes are rabbit holes. YouTube’s algorithm doesn’t make it as easy as it used to be to hop from related video to related video, but it’s still relatively simple to waste a couple of hours on the platform once it sort of has an idea of what you’re looking for.

During that stretch, I came across wins of drivers like Johnny Benson and Joe Nemechek in the early 2000s, plus second-place and top-five finishes of Benson while he drove the No. 10 for Tyler Jet Motorsports and, eventually, MB2 and MBV Motorsports.

It reminded me that that was one of my favorite eras of NASCAR. Though there were clear frontrunners in the Cup Series, occasionally the mid-pack teams could eke out a strong finish or even a victory. Haas-Carter Motorsports with Todd Bodine, Jasper Motorsports and Robert Pressley, PPI Motorsports via Ricky Craven — these were all teams that didn’t necessarily have the funding or the notoriety of the big guns but could surprise you here and there rather than always being relegated to somewhere outside the top 15.

At the beginning of 2021, Michael McDowell won his first Cup race, the Daytona 500, with Front Row Motorsports. That was a bit like the old days, one of the teams with fewer wins in the series coming out on top. But it came at Daytona International Speedway, where things like that happen from time to time.

Then McDowell continued to excel, rattling off an additional top five and four more top 10s up to this weekend’s doubleheader at Pocono Raceway. While the other top five occurred at the Daytona-esque Talladega Superspeedway and two of the top 10s also occurred at road courses (arguably McDowell’s specialty), a fifth — an eighth-place run — happened at Homestead-Miami Speedway, not generally considered one of FRM’s strong suits.

But McDowell is no longer alone. In the last few weeks, a new challenger has emerged in Ross Chastain.

First, a disclaimer: yes, Chastain drives for Chip Ganassi Racing, which at various points over its lifetime has been considered one of Cup’s top teams. But things haven’t exactly been that way since 2020, with the No. 42 post-Kyle Larson largely struggling last year and Kurt Busch having a good 2020 (including a win) but falling off a bit in 2021. It’s not a shock to see Busch or even the No. 42 in the top 10 per se, but battling for the television broadcast’s attention at the front of the pack has been a tad rarer.

And anyway, Chastain’s a rookie. Maybe not in the traditional sense — before 2021, he’d started 79 Cup races — but certainly in terms of having a ride that’s meant to challenge for position instead of not expecting to finish on the lead lap most of the time, as was the case when he drove for Premium Motorsports in 2018 and 2019. 2021 is a coming out of sorts for him, his first chance on the national stage in equipment that can get him in victory lane. And while sometimes newcomers from lower series succeed right off the bat, others periodically take longer — maybe even an entire season — before they start living up to the potential expected of them.

Thing is, it was hard to know where Chastain stood. A fixture on the NASCAR national circuit since 2011, he developed a reputation for punching above his weight in lesser equipment, especially with veteran organization JD Motorsports with Gary Keller in the Xfinity Series. He even helped Camping World Truck Series team Niece Motorsports to the point where the Al Niece-led outfit was expecting top 10s, not citing them as a job well done if and when they happened.

We’ve seen this story before, though. Casey Atwood, David Gilliland, Scott Riggs and Brendan Gaughan are a few of the drivers over the past decade or two who come to mind who showed potential in lower series that got them Cup looks, only for their eventual careers to show much less success on the Cup statistics side than their Xfinity and Truck exploits did. It happens; hell, sometimes the reverse is true, with Harrison Burton running better in Xfinity than he did Trucks, or Jimmie Johnson becoming a seven-time Cup champion despite an Xfinity career that was above average at best.

Despite a seventh-place finish in the Daytona 500 to start the season, it seemed like Chastain might trend more toward the former at first, with no finish better than 14th between races two and 13. A fourth-place run at Circuit of the Americas before the rain ended the race was a surprise maiden top five, and then came his win in the All-Star Open’s first round that slotted him into his first All-Star Race.

In all, a 37th-place run at Charlotte Motor Speedway post-All-Star Race is the only recent blemish in a series of races that’s also included a seventh at Sonoma Raceway and then, for his latest trick, a runner-up finish at Nashville Superspeedway last weekend.

Suddenly, seeing the No. 42 near the front of the pack isn’t a huge surprise. And Chastain, who in the first third of the season was largely an also-ran, is showing speed that might actually slot him into victory lane before the end of 2021.

And that’s exciting. Just as McDowell running better than FRM often does this year and last, seeing Chastain mixing it up among Larson, Kyle Busch, Chase Elliott and more is a breath of fresh air at the front of the field. No longer are the newcomers to the series’ top half simply those who exceled for strong teams in Xfinity and are now driving for those same teams in Cup (Tyler Reddick, Christopher Bell, etc.). Chastain’s the type who clawed his way to the top by over-indexing results-wise with smaller organizations and didn’t fumble his shot when he finally got a chance with a better ride.

Plus, he can be reckless. He’ll go for the position if he thinks he can grab it — and sometimes when he can’t. He isn’t the type content with laying back while others race for the win; his showing in the All-Star Race, which saw him challenging for the lead early on among the sport’s top talent, is evidence of that. He might falter doing so, but that added uncertainty is absolutely what the Cup Series needs in an era where cars are easier to drive and mechanical failures happen less and less. It’s nice to know there are still wildcards.

Since COTA, it seems like Chastain’s embraced that role. Aside from the subpar Charlotte run that’s practically canceled out by his All-Star Open and Race showings, the No. 42 has appeared to run with a greater confidence, like he belongs with the upper echelon of American stock car racers.

It could just be a lucky stretch. Otherwise, we might have seen one of the sport’s next great grassroots stars finally blossom into a Cup contender.

With no disrespect to Ross I would suggest that a part of his success is under the hood of his car. Of course he runs Hendrick engines. In case no one has noticed Hendrick cars seem to have 50 more HP than everybody else.Is it a coincidence that Chevrolet gave them a new power plant this year? No that cant be it. Can it?