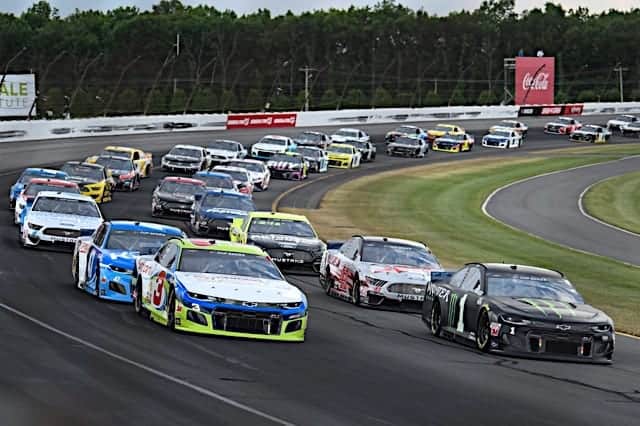 This weekend at Pocono Raceway, it’ll do it again.

Regardless of worldwide pandemics, was last season the first time NASCAR ever hosted two Cup races on the same weekend?

Well, yes and no.

Past: Before the Modern Era

In order to look back at the first time two Cup points races were held on the same weekend, we’d have to look all the way back to before the modern era of NASCAR competition, before 1972.

Keep in mind, this was during the genesis of NASCAR, which featured a chaotic racing schedule of both asphalt and dirt short track events all over the country — and sometimes on the same day.

Technically, no racetrack featured two Cup races in the same weekend before Pocono in 2020. However, last year was not the first Cup weekend with two events. That honor belongs to the Martinsville Speedway and Winchester Speedway races on Oct. 15, 1950, two separate events featuring two different fields of drivers.

Nowadays, the thought of NASCAR hosting two separate races at two different venues on the same day sounds absurd, but how about the idea of three events on one day?

On Oct. 14, 1951, Cup competed at Pine Grove Speedway, Martinsville and Oakland Stadium almost exactly one year after its first doubleheader weekend. Tim Flock, Frank Mundy and Marvin Burke won at each respective venue. Burke’s victory at Oakland was his only career win.

Excluding the Daytona International Speedway qualifying Duels, there were a total of 94 instances in which the Cup Series competed within two consecutive days in the pre-modern era. Nearly a third of those events were on the same day.

Of course, none of these events occurred at the same venue; that never occurred until 2020.

At the beginning of the 2020 season, the only weekend that was meant to have more than one Cup event was the dual Pocono race weekend in late June.

Then the COVID-19 pandemic happened. The coronavirus forced NASCAR’s hand and changes to the schedule had to be made to make up for missed events.

While Pocono kept its original race dates on the weekend of June 27 and 28, Michigan and Dover were both added to the doubleheader Cup roster. The Xfinity Series held four duel event weekends at Homestead-Miami Speedway, Kentucky Speedway, Dover and Richmond Raceway, while the Camping World Truck Series saw just one at Kentucky.

If there is any speculation of which drivers thrived on the Cup double-duty weekends, one name easily stands above the others: Kevin Harvick.

In the six races held during doubleheaders, Harvick won four of them, including a sweep at Michigan.

Last year’s win at Pocono was the first victory at the Tricky Triangle for Harvick, but that wasn’t the case for the other winner of that doubleheader weekend, Denny Hamlin.

Hamlin won the other two doubleheader races, with one of them being his sixth career Pocono win.

The duo’s doubleheader dominance stemmed from their overall performance in 2020, as the two won a total 16 races last year.

If doubleheader weekends are the friend of any driver that appears to be having a dominant season, there’s no doubt that statistic will correlate to Kyle Larson and Hendrick Motorsports in 2021.

Larson, who is looking to win his fourth and fifth consecutive Cup points races this weekend, will also experience his first NASCAR doubleheader, as the driver of the No. 5 was still serving his suspension during the 2020 season when the Michigan, Dover and Pocono doubles occurred.

If correlation matches causation in this case, there’s a good chance we’ll see Larson on top once again. However, there’s always the chance of history repeating itself, which is the hope for the winless-in-2021 Harvick and Hamlin.

When they shuffle the schedule again, it’d be fun to see a Pocono or Daytona doubleheader where one day is the traditional lay out and the next is the road course.

Enough with the Road Courses and one lane/grove short tracks. It just promotes crash ’em and pass ’em tactics.