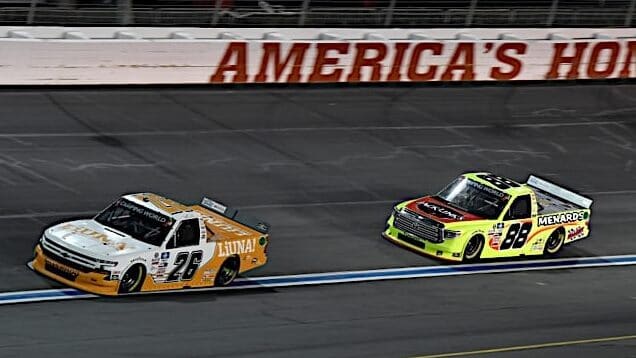 Just three races remain on the 2021 Camping World Truck Series schedule before 10 drivers will face off in hopes of snagging this year’s championship.

John Hunter Nemechek (four wins), Ben Rhodes (two wins), Sheldon Creed (one win) and Todd Gilliland (one win) have all locked themselves into this year’s playoffs with wins this season. Of course, that leaves six spots open for drivers to win or point their way in over the next three races, which will stretch from this weekend all the way into the first weekend of August.

Austin Hill (+145), Zane Smith (+108) and even Matt Crafton (+73) are in a pretty solid position as the regular season winds down. While it’s technically mathematically possible for any of that trio to fall out of the top 10, it’s highly unlikely their playoff hopes are in any real danger. In fact, the same could also be said about Stewart Friesen (+53) unless he has an incredibly dismal next three races.

Meanwhile, rookies Carson Hocevar and Chandler Smith are the final two drivers currently above the cut line, though they’re a little more vulnerable to a poor finish. Hocevar holds a 30-point cushion, while Smith’s is a slimmer 15 markers. Additionally the duo are in the uncomfortable position of potentially being knocked out should a driver outside the top 10 win over the next three races.

Meanwhile, Johnny Sauter, currently 12th in the standings, is the first driver on the outside looking in, and with just 15 points separating him and Smith, there’s still a chance for the veteran to point his way into the playoffs. But beyond Sauter, drivers like Austin Wayne Self, Tyler Ankrum, Derek Kraus and more will need a win to make the playoffs.

This year’s winners are likely pretty pleased they aren’t staring down the unique final stretch of the regular season to make or break their championship hopes. This weekend, the series hits Pocono Raceway for one of the shortest races on the schedule. The track itself, nicknamed the Tricky Triangle, presents its own challenges, too, and it’s produced 10 different winners in 11 races.

From Pocono, it’s a weekend off before heading to Knoxville Raceway for the series’ first visit to the half-mile dirt track. The third and final race to close out the 2021 regular season doesn’t come until the first week of August after the series takes most of the month of July off. And that final event also happens to be the Truck Series’ first visit to Watkins Glen since 2000, meaning every driver in the field will come in with zero truck experience at the road course.

The playoff bubble watch may not be incredibly interesting, especially given that most of those outside the top 10 currently haven’t run seasons that seem at all championship worthy. But the diversity of the tracks that are ahead and the very real possibility of an unexpected winner make it important to pay attention to.

Totally nuts that there are only three (3!!!) races between now and the play offs for the truck series.

They need to either spread the races out better or up the schedule.