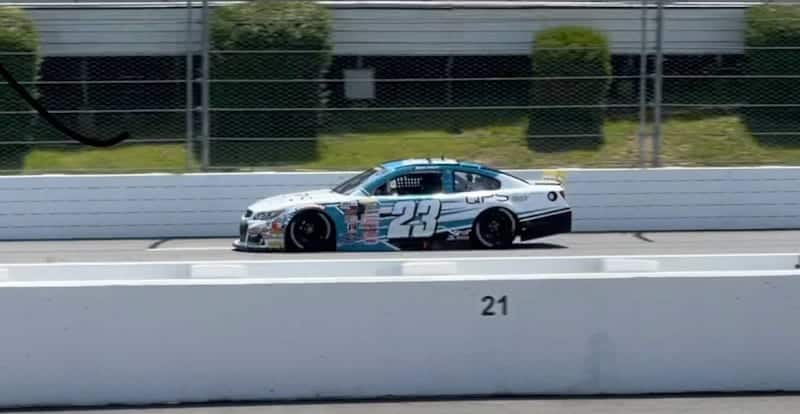 By the time he was towed into the garage on Friday (June 25), his car wasn’t the only thing fuming.

Mayer and team owner Bret Holmes were furious after reports of debris were ignored for four laps, including a driveshaft and pinions that were suspected to have fallen off the No. 30 car of Kris Wright.

Problems under the hood for Kris Wright, whose team is now pushing him to the garage. #ARCA pic.twitter.com/xhN98NXWYd

Mayer was running fourth when he ran over what the team believes was a driveshaft and quickly fell back to ninth before the caution was displayed for Scott Melton, whose No. 69 car lost an engine after running over loose parts himself.

Holmes, whose Bret Holmes Racing No. 23 team was fielding Mayer, expressed his disappointment after the program’s newest intermediate car was damaged due to what he said was ARCA’s mistake.

Major issues for the No. 23 of @sam_mayer_, whose team says a driveshaft is stuck under the grille.

Engine has expired after trying to catch back up to the field. #ARCA pic.twitter.com/djHs7LZLnm

“You work your d**k in the dirt for two days to put on a show and spend a lot of money to come out here and race do this, and the officials don’t want to listen to the people that put on the show and come here and keep the series alive,” Holmes, the defending ARCA champion, said. “And when they don’t [listen], stuff like this happens.

“It’ll probably cause us to not be able to go to the next race we wanted to [at Iowa Speedway] and that’s their fault. Just stupidity from the series. They do it so often. I mean, it’s not a secret. I mean, you can ask 100 people on pit road and they’ll tell you the same thing.”

Behind the wheel, Mayer had nowhere to go before the debris wound up in his grille and tore a hole in the oil cooler.

“It was right in the racing groove and I cleared that out,” Mayer said. “That’s what ended our day because that piece of driveshaft was literally up on our nose the whole time and took our oil pan out, which obviously that’s a huge piece of downforce that we need.”

Mayer held an additional layer of frustration as extra track time ahead of his NASCAR Xfinity Series debut for JR Motorsports was cut short.

“Just disappointed ARCA won’t listen to anybody up on the spotter stand,” Mayer said. “There’s about 15 spotters up there complaining that there was debris on the racetrack and still nothing, and it took seven laps and probably destroyed three race cars and engines to make it happen. Got to get on that. I’m a little bit mad. I’m gonna probably get heated for this interview right now but honestly, it’s ARCA. It’s whatever.”

The No. 23 wasn’t the only team upset with the lack of cautions. Melton’s car was heavily damaged after running over bits and pieces and wound up in the garage area just next to Mayer.

“What I’ve heard is that the debris was called four laps before we hit it,” Melton said. “And frankly, when you’re running 180 mph, I think it’s incumbent on them to be on the safe side. And this was ridiculous. I mean, it’s not just the damage of the car. The yoke that took off the No. 23 could have hit Sam in the face.

“There’s so many bad things that can happen. … It should have been called to be yellow.”

The 18-year-old Mayer, meanwhile, shifts his focus to Sunday, when he’ll jump behind the wheel of the No. 8 Chevrolet for the rest of the season (sans Richmond Raceway).

Holmes said having Mayer in the car was a major boon for his organization, even if the end result was a lost car.

“He’s just a natural talent,” Holmes said of the teenager. “He knows how to push the limit of the car and knows how to communicate well and obviously is a proven driver and champion and can win in any race seat if he’s in a good car. It’s nothing but a positive to have him on our team.

“I’m glad that you know he chose us to run for us, and it’s really cool that somebody like that chose us and just wish that we had better opportunities [for him].”

Mayer had an open practice in the ARCA car Thursday for five hours before another hour-long practice session Friday.

“I learned a little bit,” Mayer said. “At least I know the track heading into Sunday. We’ll have to see what happens in the Xfinity race. Hopefully it ends a lot better than this.”

IF EVERYONE WAS COMPLAINING, WHY WASN’T THE CAR WITHOUT A DRIVESHAFT BEING MENTIONED?? TI SHOULD HAVE SLOWED DOWN QUITE A BIT !!