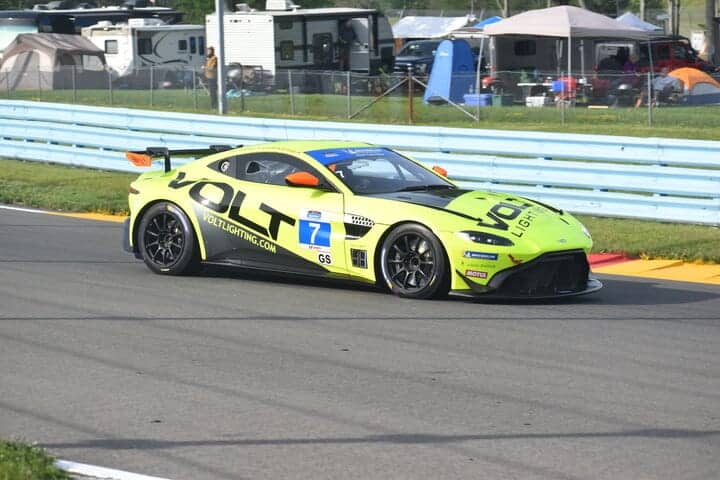 Pilot Challenge teams were on-track bright and early Friday morning.  The green came out at 8 a.m. for 60 minutes of practice on Watkins Glen’s 3.4-mile long course.

Spencer Pumpelly, a late addition to Blackdog Speed Shop’s lineup in place of team owner Tony Gaples, was quick early on in his McLaren.  Hindman spent much of the session on top of the charts as well.  However, it was Notlad Racing with RS1’s Stevan McAleer, driving in place of the injured Matt Dalton, who turned in the fastest lap in his Aston Martin at 106.880 mph with 22 minutes remaining in the session.

McAleer was four-hundredths of a second faster than the BMW of Turner Motorsport’s Robby Foley.  Hindman was third quickest, followed by the Supra of Riley Motorsports’ Scott Andrews and Wright Motorsports’ Jan Heylen.

In the midday practice session, Hindman set the fastest lap of the weekend 17 minutes into the final session, just after a quick adjustment in the pits.  The lap was three-tenths of a second faster than Pumpelly, while McAleer was third.  Andrews was fourth, while McCann Racing’s Andrew Davis was fifth in his Audi.

Heylen was sixth in the sole Porsche in the field.  Murillo Racing’s Eric Foss was seventh, followed by Plumb and Dillon Machavern in the Turner Motorsport No. 95 BMW.  Motorsport In Action’s Spencer Pigot was 10th fastest.

In TCR, Eversley was once again fastest in his Honda Civic Type-R TCR.  He was a little faster in the second session, setting a lap at 104.950 mph to top the class in 23rd overall.  Eversley’s lap was once again more than half a second faster than anyone in the class.  This time, it was Estep in his Hyundai Veloster N TCR that was second.  Noaker was third quickest, then Copeland Motorsports’ Tyler Maxson and VGMC Racing’s Victor Gonzalez Jr.

There were no red flags during either of the two practice sessions.  The opening session did see a couple of spins, but nothing serious.

The second session saw FASTMD Racing’s Alexandre Papadopulos slide off-course and nose his Audi into the barriers.  He was able to drive his Audi back to the paddock, but the team’s Audi R8 LMS GT4 had a damaged nose and splitter.

Qualifying for the Tioga Downs Resort & Casino 240 is scheduled for 3:25 p.m. Friday afternoon.  Since Saturday’s race is a four-hour event as opposed to the normal two-hour race, the grid might look different as compared to the typical Michelin Pilot Challenge.  We’ll have a recap of qualifying here at Frontstretch.