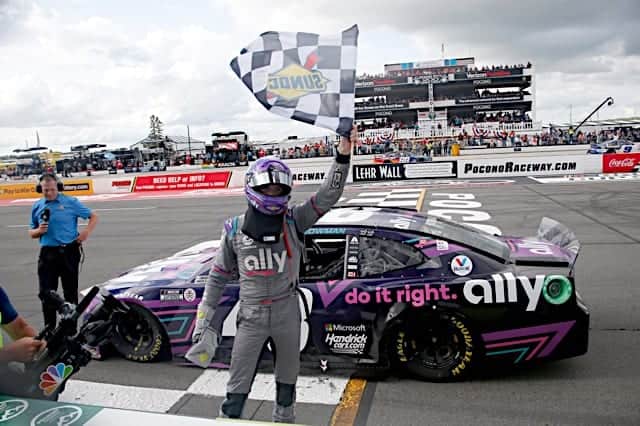 Kyle Larson was well on his way to his fourth consecutive NASCAR Cup Series win, which would rank him alongside legends like Jimmie Johnson, Jeff Gordon and Dale Earnhardt in the record books.

Then, in true Hollywood fashion, on the last corner of the last lap, he cut a tire.

His teammate Alex Bowman, who Larson passed a mere three laps earlier, drove past his Hendrick Motorsports teammate to steal the win — his third of 2021.

“It’s laughable because I can’t believe it,” Larson said from the infield care center. “It shredded halfway through the short chute there, and I couldn’t turn.

“I guess that’s one thing that’s probably keeping me excited and not depressed is that we get to come back again tomorrow. I feel like we learned a lot about our car today, and the track came to us a lot. We should be good for tomorrow.”

Bowman was in a better mood.

“I hate to win one that way,” Bowman said in his post-race interview, “but, hell yeah, I’ll take it. […] Man, we kind of gave the lead away. Were on two tires, just got super tight. Tried to hold him off as long as I could.

It was an eventful race, the first Cup contest of the Pocono doubleheader weekend.

Much like the Camping World Truck Series race earlier, there was already flared fenders before the field reached turn one.

Chase Elliott, who started near the back of the field after being disqualified last weekend for a lug nut violation, was rear-ended by Ryan Preece at the drop of the green flag.

The @Hendrick9Team goes to work on the rear of @ChaseElliott's car.

Elliott's car was damaged after contact with Ryan Preece at the start. #NASCAR pic.twitter.com/njiWVU34Tv

On lap 5, Byron got around his dominant teammate Larson for the lead. Byron, who used the sticky PJ1 substance NASCAR places on track surfaces to increase grip, sailed around both his teammate and Joey Logano.

The first caution of the day flew on lap 9 for debris. The early yellow was declared to be the competition caution that was scheduled for later.

Two laps after the restart, calamity struck again. This time it was for Cole Custer.

Brad Keselowski, who had pitted during the early caution, was trying to move through the field when Custer attempted to block the No. 2 Ford. Keselowski darted to the inside of the No. 41 quickly and clipped its left rear quarter panel, sending the Stewart-Haas Racing Ford slamming into the outside wall.

Take a look at what happened between @ColeCuster and Brad @Keselowski early at @PoconoRaceway. #NASCAR

Custer's day is done, and Keselowski has front-end damage.

Upon the next restart, Kyle Busch was able to sail by Byron for the lead on lap 18 and went on to win stage one.

When the stage caution waved, many drivers stayed out rather than join leader Busch and others. Logano restarted with the lead, followed by Busch’s brother Kurt in second.

Of course, the duo’s strategy eventually caught up with them, as both Kurt Busch and Logano pitted on lap 45. Ross Chastain inherited the lead.

A little over 50 laps in, Ryan Newman spun and smacked the outside wall in turn 1, bringing out the third non-stage caution of the day.

Trouble for the @RoushFenway No. 6 car of Ryan Newman.

The ensuing pit stops saw the field shuffled yet again. Logano and Kurt Busch stayed out as they were the most recent to pit. Surprisingly however, Kyle Busch and Michael McDowell both stayed out as well, despite not pitting since the first stage.

Kyle Busch saw himself leading again with 20 laps to go in stage two, but while attempting to pull away the yellow flag flew again for Corey Lajoie.

It wasn’t too long after the restart that Chastain smacked the outside wall and spun. The Floridian watermelon farmer restarted fourth before dropping out of the top 10 after a bad fire-off. It was the sixth caution of the day.

At last, Kyle Busch came to pit road during the caution, relinquishing the lead to his older brother.

The following restart left only two laps to go in stage two. While Kurt had older tires than everyone behind him, he still held off a charging Larson for a Busch brother sweep of the weekend’s first two stages.

It was also the second week in a row that the Las Vegas native won a stage.

Also mirroring last week was Larson finding himself in the lead in the final stage as the laps wound down.

Larson made the pass for the lead with 47 laps to go. To add more good news to the No. 5 team, both the second and third place cars of the elder Busch and Logano still had to pit for four tires, as their tires were nearly 10 laps older. Larson’s fresher tires meant the team had far more flexibility in pit strategy and could even take two tires on a green flag pit stop if able.

All of these varying strategies that had played out throughout the entire race finally culminated when those green flag stops began with around 40 laps to go.

Instead of taking the expected two tires, however, Larson took four.

Despite the longer pit stop, Larson was still able to rejoin the race track ahead of drivers like Kevin Harvick, who had only taken fuel during his stop.

When Kyle Busch pitted, however, he only took fuel and was able to undercut the Californian to stay ahead. When Larson caught the Joe Gibbs Racing driver, he couldn’t get around him. At least, not until a debris caution flew with 24 laps remaining.

On the restart, all eyes were on the two Kyles, the pair seeming to be the cars to beat.

So imagine the surprise when Bowman snuck by both of them to take the lead with 19 laps to go.

The 48 takes command of the race! pic.twitter.com/aZnU9Nxxur

For the last 20 laps, Larson hounded his Hendrick Motorsports teammate for the lead as they pulled away from the rest of the field.

It appeared as though Bowman really was about to steal the victory from the two Kyles. Then, finally, with four laps to go, Larson was able to set up his teammate for a pass in turn 2 and it connected.

The rest, as they say, is history.

It’s not all doom and gloom for Larson, though. The driver of the No. 5 still managed to stay in the top 10 and finish ninth. Unfortunately, a wrecked race car will likely mean he will have to start from the back for tomorrow’s 140-lap race.

Larson has become a lot smarter racer driving better cars. Bowman did a great job of holding him off so long on two tires. Glad to see Kurt get a stage win and a good finish. Denny said he had the best car. Well, we get to do it all over again tomorrow.

Denny is full of chit.

I’m interested in seeing how much Larson has matured as a driver. Starting at the rear, in a back up car, does he exercise patience, or push it to extreme limits and crash. I hope someone calmed him down and he just runs the race his car allows him.

Same here. Watching Larson develop the racing smarts to match his racing skills has been the most compelling NASCAR story of the summer. Right now he’s putting on a clinic on stock car racing. I’m a Brad Keslowski fan, but I still appreciate Larson’s accomplishments this season.

He’s only as good as his car – and his tires. LMBO! I only wish Bowman had wrecked him to get the win.

I have always liked Brad too. Ever since his first win at Talladega. I appreciate driving skills and smarts.

It’s hard to feel sorry for a guy who has had the fastest car in every race over the last couple months. Bowman actually proved he is every bit the driver Larson is by staying ahead of him on 2 tires for as long as he did.

All the HMS cars are fast, but Larson’s car has a setup that makes him faster than his “teammates,” and in a different zip code than the other teams.

I just wish Bowman had held Larson off by being more aggressive, blocking or rubbing fenders. I’m sick of HMS drivers sucking up to this guy, start treating him like a competitor rather than an adored “teammate.”

In NASCAR the concept of “teammate” is an oxymoron. Once the cars are on the track, a driver should consider every other driver as somebody he has to beat, not somebody to treat with kid gloves. The guys at Penske and JGR don’t “let” each other pass just to be nice.