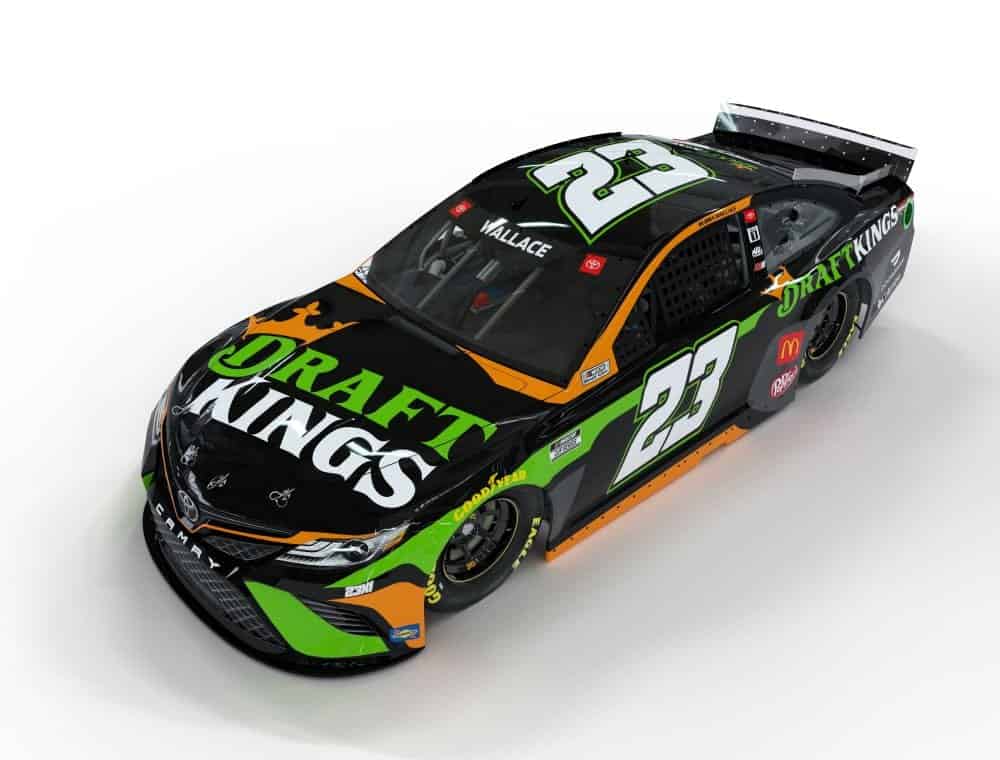 This weekend, the NASCAR Cup Series heads north to Pocono Raceway for a doubleheader, which means twice as many chances to win money in fantasy. Let’s get your daily fantasy NASCAR DraftKings rosters set for Saturday’s and Sunday’s (June 26-27) races!

It’s the second year in a row the Tricky Triangle hosts two Cup events on back-to-back days, so we’ll have an idea of what to expect this time around.

While last year featured the Denny Hamlin and Kevin Harvick show, this season Hendrick Motorsports (particularly Kyle Larson of recent) has dominated, winning eight out of 17 races as an organization including the last five events. But will Larson win his fourth points race in a row this weekend?

Recent history at Pocono says no. A Chevrolet hasn’t won there since 2016 with Kurt Busch driving for Stewart-Haas Racing, and Dale Earnhardt Jr. took his No. 88 to victory lane in both races in 2014. Larson also has a mediocre-to-decent average finish at best, never finishing better than fifth outside of a runner-up finish there in 2018. So which team has been winning? Joe Gibbs Racing. It’s won five of the last seven races at the Tricky Triangle, with Hamlin winning two of the last three.

By the way, here’s a graphic showing the three differently-shaped turns at Pocono:

If you could build your own racetrack, what other track’s turns would you use to make your track unique? ? #WhatTurn4 | #NASCAR pic.twitter.com/QKqVV4pBPg

Since there’s less points available for laps led and fastest laps this weekend (due to shorter races of 130 and 140 laps), you might not want to force Larson into your lineup if you don’t think he’ll win. Things can change, though; Hendrick could continue its winning ways and fill up the top spots. At least with this weekend you have two chances to win your DraftKings contests and can make adjustments for Sunday’s race.

Remember that the lineup for Sunday depends on where a driver finishes on Saturday; the top 20 finishers will reverse in order to start the race on Sunday. Positions 21-40 will start where they finished on Saturday.

Before I share a special contest from DraftKings, let’s review what happened last week at Nashville Superspeedway.

Another race, another Larson win. It was really a no-brainer to play him once again, since he’s been on a hot streak, and it definitely paid off. Kevin Harvick had a good day as well, as did Daniel Suarez, and while Bubba Wallace and Ryan Preece had poor performances, this lineup still won in cash and tournament contests.

In addition to DraftKings’ regular daily fantasy contests, it has a special free-to-play pool on Sportsbook for Sunday’s race, where it’s sponsoring Bubba Wallace. The top prize winner will receive a signed team jersey, while the top 160 players win cash.

The first two questions ask which driver of the four listed will finish further than the others on Sunday. Three questions ask about the winner, while the remaining three are about Wallace.

You don’t need to live in one of the few states allowing betting on DraftKings Sportsbook, you just need to already be eligible to play daily fantasy. Check out the link below for information and how to enter.

Note: the following is a sample NASCAR DraftKings lineup; you can use the information to create your own. Sunday’s prices are italicized.

Elliott has one win so far this year at the rain-shortened Circuit of the Americas event and had six straight top-seven finishes before crossing the line 13th last week at Nashville. Although that dropped his DraftKings score to under 30 points, he still led 13 laps and won a stage (though he was disqualified after the race, DraftKings doesn’t count post-race issues). In fact, the last three points events he took his No. 9 Chevy to the front for at least 13 circuits. He’s looking to rebound from the bad result this weekend in the doubleheader.

He’ll begin Saturday’s race 29th, and both times that Elliott started in the 20s at Pocono he earned top-10 finishes. If he earns a ninth-place result or better he’ll score a minimum of 55 fantasy points on DraftKings, which would give you a huge boost for your lineup. Though his highest finish at Pocono is fourth (2016, 2019, 2020), and though he’s only led 67 total laps, I couldn’t pass up the position-differential potential.

Hamlin seems rather cheap for a driver who’s won six times at the triangular-shaped course. I understand that he hasn’t scored over 50 DraftKings points since Kansas Speedway, but the Gibbs cars have been too good here to ignore it. Granted, Hamlin’s first four wins came within his first four years there (2006-2010). But he took his No. 11 to victory lane in two of the last three Cup events, leading 81 total laps in those two races.

Lately in 2021 Hamlin has somewhat struggled, ending up 22nd last week at Nashville and reaching a top five just once in the last six points races. Still, before Talladega Superspeedway Hamlin was one of the most consistent drivers, earning eight top fives in the first nine races. It’s unusual for him to go 17 races without a win, especially since all his teammates won already. Look for him to bounce back with a strong run at Pocono.

I have Buescher in this lineup in hopes that he’ll earn an eighth place or further so he can start 12th or below on Sunday. He’ll roll off 25th Saturday and generally gains 10 or more positions on the racetrack when he starts this far back. The No. 17 Roush Fenway Racing pilot has six top 20s in 10 starts at Pocono, including a 10th last season. Did I mention he won a fog-shortened event there in 2016 as well?

So far this year Buescher has three top 10s and six top 20s in his last seven starts. He crashed hard last week at Nashville and had just his fourth finish outside the top 20. He’s having a career year and needs to have a strong weekend to ensure his place in the top 16 of the points standings. Though his DraftKings price isn’t ideal, it could still be beneficial to your total fantasy score.

Reddick is an interesting one for this weekend, as his salary on Sunday is $1,000 less than Saturday’s. I believe he’s able to earn a sixth place Saturday, and if he does, then he would line up 14th the following day. However, if he has a bad day like he did in both races last year, then his potential value will be very high for Sunday’s race. Hopefully he has two strong days.

He’s not exactly trending upward lately, though; the No. 8 of Richard Childress Racing came home 19th in each of the last two points races. It ended a streak of three races in the top 10 and five of the previous seven. Still, Reddick has shown speed this season and could very well earn a top 10 at a place where he ended second in the 2019 Xfinity Series race.

DiBenedetto has really performed well the last couple of years at the Tricky Triangle. He finished 17th in both events in 2019 while driving for the defunct Leavine Family Racing, and last year he came home 13th and seventh in each race, respectively, for Wood Brothers Racing. These strong runs made it hard for me to not place him in my roster.

Unfortunately, he’s only had two top-20 finishes in the past six races this year- an 18th at Charlotte Motor Speedway and 19th at Darlington Raceway. The 24th place at Dover International Speedway broke a nine-race top 20 streak stemming from Las Vegas Motor Speedway. Hopefully DiBenedetto and the No. 21 team can get back on the right track and get some points or even a win.

I’m not sure what DraftKings is doing here, unless they think he will get a top 20 on Sunday. A 20th place would put him on the pole for June 27, so his lower salary is logical there. However, for someone who tends to end further from where he starts, $6,200 seems awfully low. Preece has had several races this year where he’s earned 30 or more DraftKings points, including at Dover, Talladega, the Bristol Motor Speedway dirt track and at Las Vegas.

In two Pocono events Preece gained positions in the Nos. 47 and 37 JTG Daugherty Racing cars. He went up six spots in 2019 to end up 23rd and passed 10 cars in 2020 to finish 20th. He starts 31st this week and another 20th or higher would be a big boost for your DraftKings total score.

I chose these drivers for Sunday because McDowell is starting 17th Saturday and I don’t think he’ll finish in the top 15 that day. If he finishes 21st or further, he would be a great value play on Sunday and you could fit more higher-priced drivers in that lineup. He has one top 10 with Front Row Motorsports, an eighth place last year. That was his fourth top-20 finish in the last seven races, and even though he doesn’t usually earn top 10s, he generally ends races further from where he starts.

Chastain, meanwhile, earned a 24th for Premium Motorsports in 2019, which wasn’t bad considering the equipment. Additionally, in 2020 he led 31 laps before crossing the line second behind Chase Briscoe in the NASCAR Xfinity Series. He’s trending upward as of late, earning two top fives and three top 10s out of the last four races so far this year and could continue his strong run on Sunday.