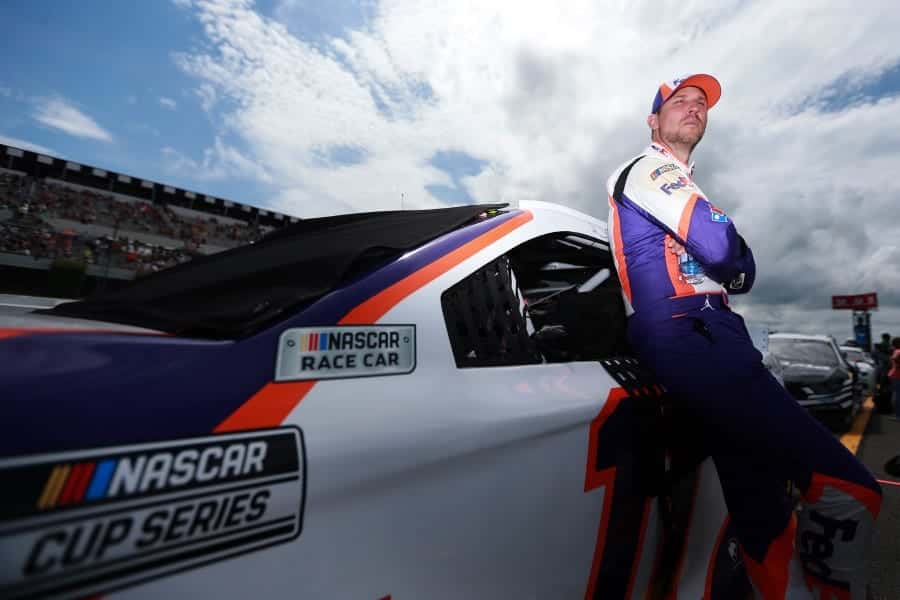 Tied with Jeff Gordon for most wins at Pocono, Hamlin led 11 laps before eventually finishing fourth to pick up his first top-five finish since finishing fifth at Darlington Raceway on May 9.

“We were good, definitely a good improvement to the field over the last month or so,” Hamlin said. “But I thought, certainly in clean air, there was certainly no one faster than us. I thought we were the fastest car at the end. I didn’t want to see that last caution.”

Hamlin took time to deride his own decision to take the outside lane on the final restart with 19 laps remaining.

“Our car just didn’t accelerate well, and I didn’t like my chances of being able to get up in the top lane on that restart,” Hamlin said. “Top was just so dominant. Hindsight is 20-20. Wish I would have chose the bottom, but ultimately chose the top, went back to sixth and was able to come back to forth. But our car was fast. Really, really fast that last 15 laps.”

Hamlin has led the points standings all season with the exception of the Daytona 500, where he was second in points. That was thanks in large part to eight top fives in the first nine races of 2021. Yet the driver of the No. 11 FedEx Toyota remains winless.

And while he’s put in decent showings over the last two months, the strength his team displayed so early dissipated as Hendrick Motorsports rose to prominence.

Sure, it’s just one race and Hendrick Motorsports still found its way to victory lane through Alex Bowman despite Larson’s misfortune. But did Joe Gibbs Racing finally find a way to close the gap?

“It’s tough to say,” Hamlin said. “I mean, everyone kind of builds their cars a lot different for tracks like these, you know, whether it be downforce and drag or whatnot. But certainly it was a step in the right direction. A little concerning our car didn’t accelerate very good, but overall, I thought we cornered really well and that was good news.”

Also on hand Saturday was Michael Jordan, who co-owns 23XI Racing’s No. 23 Toyota of Bubba Wallace. The two spent time together before the race, but Hamlin said the atmosphere doesn’t necessarily change when he’s at the track despite Jordan’s stature.

“I’m sure for the [No.] 23 team, it’s certainly good to see the guy that is investing in you, investing in this team and building it,” Hamlin said. “It’s good to see him at the racetrack and he loves coming. He loves bringing his family and enjoying it so he thought it was a great opportunity to get two races in one weekend.”

With his fourth-place finish Saturday, Hamlin is slated to start 17th in Sunday’s Explore the Pocono Mountains 350.

Any changes to the car?

“There’s a few things but nothing I’d want to put in print,” he laughed.

The Explore the Pocono Mountains 350 is scheduled to begin at 3:30 p.m. ET on NBC Sports Network and MRN.

Seems like the 11 team needs a smarter driver. His latest decision apparently cost his team another win.