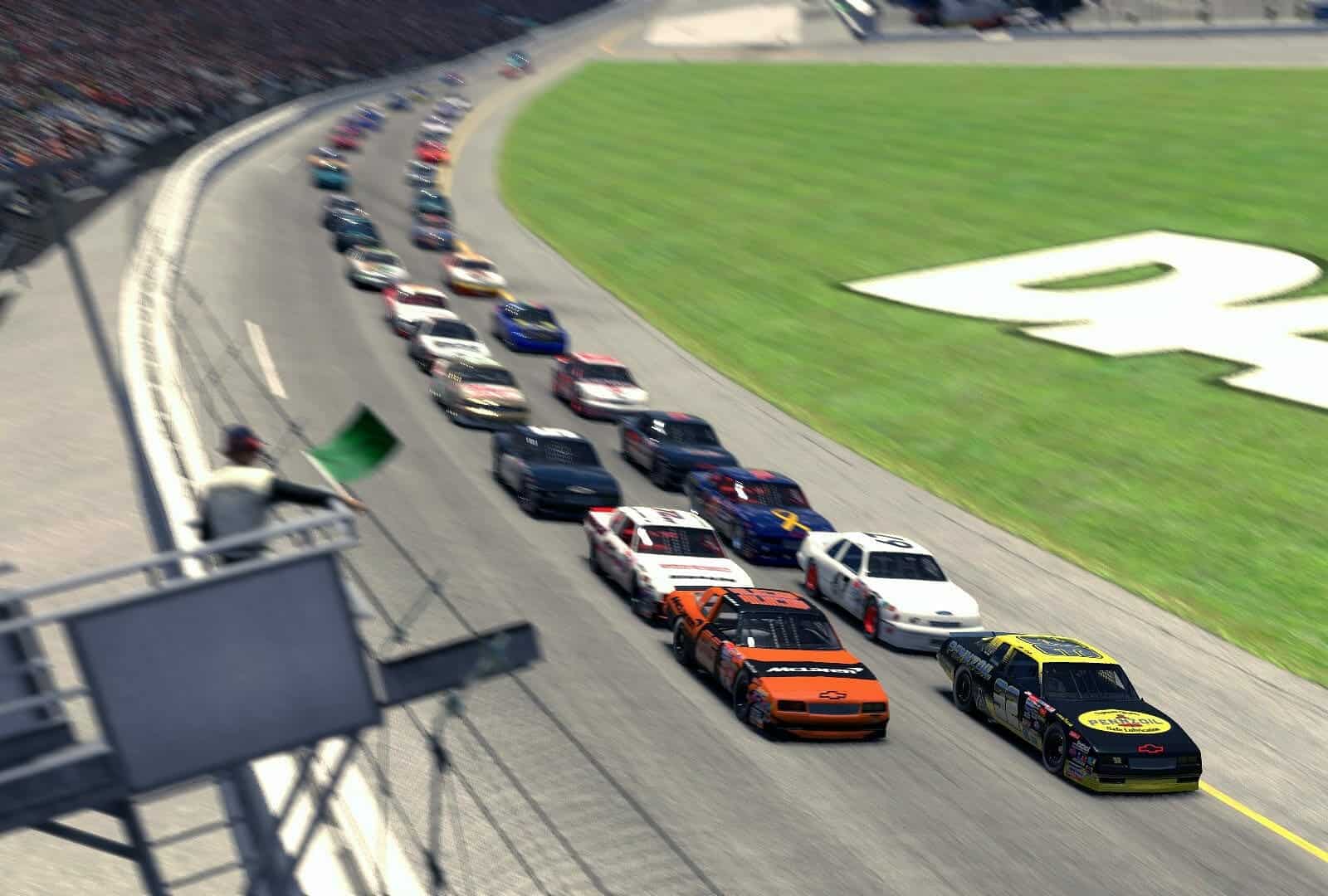 It’s been another virtually hectic week on the iRacing platform. Nashville Superspeedway was the main talk of the weekend as the NASCAR Cup Series made their debut at the newly refurbished facility. The virtual edition of the track was added during the 2021 Season 3 update and, after a few updates, the track became a fantastic virtual track to race at.

In the professional iRacing series, Bobby Zalenski became the 10th different winner in 10 races. That makes the playoff picture as convoluted as ever with four races still remaining until the playoffs.

The two NASCAR Cup-style series in the roundup, 100% and FTF, took their talents to Nashville last week while Monday Night Racing went a little further west to World Wide Technology Raceway at Gateway, racing in Super Late Models. Meanwhile, eRacr.gg basically finalized its lineups for the Firecracker races that will run this upcoming week.

Last week the series went over to Nashville Superspeedway for its first trip to the 1.33-mile concrete facility. Three hundred laps were on the board for the night and 29 drivers were in attendance.

History was made with Bryson Hixenbaugh taking the flag for his 20th career series victory. Hixenbaugh was unmatched all night as he won the pole, swept both stages, led 254 laps and took the win with a margin of more than 12 seconds back to Kevin Steele. Adam Benefiel challenged early but wound up finishing seventh.

The first of two Pocono races featured Adam Benefiel returning to victory lane in the Friday night special event. Benefiel started second to pole sitter Jon Dulaney. The two traded the lead through the race, Dulaney leading the most laps on the night at 62, but at the end of an overtime restart Benefiel outlasted Kevin Steele for the victory.

The victory ties Benefiel with Bryson Hixenbaugh for the most wins on the season at five. It’s Benefiel’s first win since the Bristol Motor Speedway dirt event back in March. The second round of the doubleheader at Pocono will take place on Saturday night and will be covered in next week’s roundup.

It was the Kevin King show once again on Sunday night in the Kickin’ the Tires 400k at Nashville Superspeedway. In a redemption arc from the previous week at Charlotte Motor Speedway where he lost fuel pressure off of turn 4, losing the race to Garrett Konrath in the process, this time King was able to pit perfectly in the long green-flag run to the finish.

The first 25 laps in the race were filled with a handful of cautions, but once things settled down at the new digs on the service it was clean and green through the remainder of stage one, all through the second and clear to the checkered flag. Konrath was able to take the first stage by pitting short but a shorter pit was not the call for the ultimate win.

That became evident in the second stage when King was able to outrun Konrath for the green-checkered flag. From there, a final pit stop on the night once again placed Konrath in the best spot should a late caution fall, but that caution never came, allowing King to fly by and take his second win of the 2021 season.

We had a 162 lap run to the checkers with multiple green flag stops, spanning from Stage 1 to the end.

Congrats to @kkingstyle on another victory! King had a fast car all night and the right pit strategy to win the @KicknTheTires 400k at Nashville! pic.twitter.com/PuGRrYTj6X

With his second win of the season, King now leads the series in playoff points earned, a total of 18 over Michael Guest’s 17 and Konrath’s 16. Brian Mercurio continues to lead the standings despite his inability to find victory lane. He doesn’t need to win to make the playoffs, especially if he’s leading the points by the end of Daytona, but five extra points to start the playoffs couldn’t hurt.

When Shane van Gisbergen shows up, the rest of the field is officially on notice. In his fifth start in seven races on the third season so far, van Gisbergen was able to do what he’s done most of the time he races in Monday Night Racing.

Van Gisbergen likes to toy with the field, it seems. His first win came from the pole position at Watkins Glen International, but since then he’s started fifth at Bristol, 13th at Knoxville Raceway and now 27th at Gateway. It doesn’t take long for him to work his way into the lead, though, dominating at every opportunity.

The SuperCars champion wasn’t able to lead the most laps this time. That honor went to the defending MNR champion Will Rodgers, but once Van Gisbergen got the lead with 31 laps to go, he never wavered and went on to claim another one, locking him into postseason contention by the start count.

.@Supercars champion Shane Van Gisbergen (@shaneVanGis) on a huge comeback win and how he is so dominate this season in @MonNightRacing.

Official Point Standings with TWO RACES to go until the #MNRplayoffs.

With only two races until the playoffs, a handful of drivers are feeling comfortable heading into the next race at Road America. The bubble, however, is about to burst with Justin Melillo, DJ Cummings, Mark Rebilas, Ford Martin and Steve Auffant all within eight points.

The second round of attempting to make the eRacr.gg Firecracker 400 is in the books and the 43 starters are set for the main event on Wednesday night (June 30).

Nick Ottinger once again took the pole position, which made him eligible for the Radius Last-To-First Challenge. Ottinger accepted on the spot and will eventually start 43rd, which hands control of the race over to his technical teammates Michael Conti, Bob Bryant and John Gorlinsky, the other drivers who qualified with a 42-second lap time.

The second night was bump night. Only 20 spots were locked from the first night and anyone outside the top 20 had the choice to either stand on their time or retry, erasing their Wednesday qualifying time. A total of 61 drivers opted to re-qualify, leaving only seven drivers to stand on their time. Both Blake Near and Dale Earnhardt Jr. chose not to go again, and unfortunately for both of them, they were bumped out of the top 42 after being inside the night before.

It was either the track or the setups, but the cars certainly picked up speed. Caine Cook took the fastest time on the second night and will start 21st. The first driver to miss the 400 field was Jake Fisher by 0.001 seconds behind Joseph Gulotta. Unless someone drops out of the main event, Fisher will still get to compete against 42 others that didn’t make the 400 over in the Firecracker 200 on Monday night (June 28).

Junior Nation was devastated that Earnhardt Jr. was knocked out, but fear not, eRacr.gg promoters have added him in as the 43rd starter via the promoter’s choice.

BREAKING: @DaleJr announced as the 43rd entry via the eRacr Provisional for the @BlueEmu1 #Firecracker400. Tune in Wednesday at 8PM ET to watch Dale Earnhardt Jr race the #88 FilterTime Chevy on @iRacing! https://t.co/AGWgKalMYV pic.twitter.com/k5dtQyajP2

The stream will be on eRacr.gg for the 200, but it will be broadcasted by personalities from the BottomSplit crew and Moonhead himself, Travis Brown, making the event presented by MoonSplit. The main event will see the normal booth back in control, including NASCAR drivers Landon Cassill and Parker Kligerman.

100% Cup Series will run the second head of their doubleheader at Pocono Raceway on Saturday night at 8:30 p.m. ET. The replay will be available on 3 Wide TV.

FTF Racing will also be racing a doubleheader at Pocono on both Saturday and Sunday. Sunday will be live at 8:00 p.m. ET on BottomSplit.

Monday Night Racing heads to Road America in iRacing’s NASCAR NEXT Gen this week. The broadcast will start at 8:00 p.m. ET on Podium eSports.