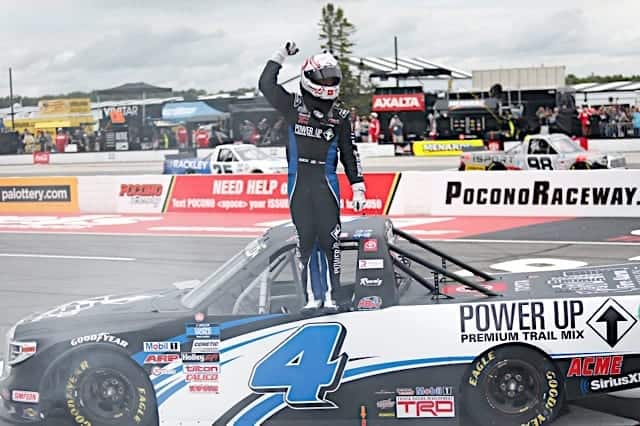 It was a dogfight between student and master in the waning laps of today’s NASCAR Camping World Truck Series race at Pocono Raceway, and as it had been for many races this season, the student came out victorious.

John Hunter Nemechek found himself battling team owner Kyle Busch for the win yet again in the closing laps at Pocono Raceway. After a close pass on the last restart, Nemechek got around his employer and was able to cruise away to his fifth win of 2021.

“Three for five (wins) against Kyle is pretty good,” Nemechek, who retained the points lead, said in his post-race interview.

It was a steady last few laps for the field, but the 60-lap event certainly didn’t start that way.

Immediately after taking the green flag, Truck Series rookie Jack Wood and veteran Johnny Sauter were collected in a frontstretch melee. Wood was pushed from behind by Kyle Busch Motorsports driver Chandler Smith into the No. 13 of Sauter before ricocheting back to the inside of the long Pocono straight. The No. 24 was unable to continue, while Sauter returned to finish 35th.

While Zane Smith led from the beginning, Cup Series veteran Busch was zig-zagging through the field, hunting for the lead.

After starting the race 22nd, Busch found himself already in the top ten after only two laps of green flag racing. By the time Smith took the green-checkered flag of stage one, Rowdy was second.

Upon the start of stage two, however, things went sideways for the two-time Cup champ — literally.

After attempting a pass on leader Smith on lap 1 of the second stage, Busch slapped the wall off of turn 3 and fell to fourth. That opened the door for defending series champion Sheldon Creed to take the lead.

When the No. 23 went to pit road for service with three laps to go, Nemechek passed Smith and completed the lap before the GMS Racing truck could reach the commitment line. In other words, Smith entered pit road while it was closed, while Nemechek went on to win stage two, his ninth of the season.

PENALTY: @zanesmith77 did not make it to pit road before it closed in Stage 2.

He'll restart at the rear of the field. pic.twitter.com/n3A5xoR94o

Busch took the lead on the restart and for 20 laps it appeared as though it would be another sure win for the Las Vegas native.

Then Stewart Friesen wrecked with 10 to go.

It was a familiar sight in the top two from then on. Busch restarted alongside his driver Nemechek, who was searching for his fifth win in 2021. On the restart, the 24-year-old dove to the bottom of his employer into turn one, managing to clear him and lead to the checkered.

“I kind of cleared myself there,” Nemechek said when asked about the pass around Busch. “[Spotter Tony] Hirschman was still saying ‘outside, outside’ […] I thought I was clear and slid up and took the air away from Kyle.”

It’s the eighth win for KBM in 2021. The team will be looking for number nine at Knoxville Raceway in two weeks’ time on a Friday night (July 9).

Coverage for the Corn Belt 150 presented by Chevy Dealers will be live on FOX Sports 1, with heat races beginning at 7 p.m. ET.

Amazing, not many racers in Nascar can outrun Kyle in a good racing vehicle. ?

Arent they from the same team? Hmm.