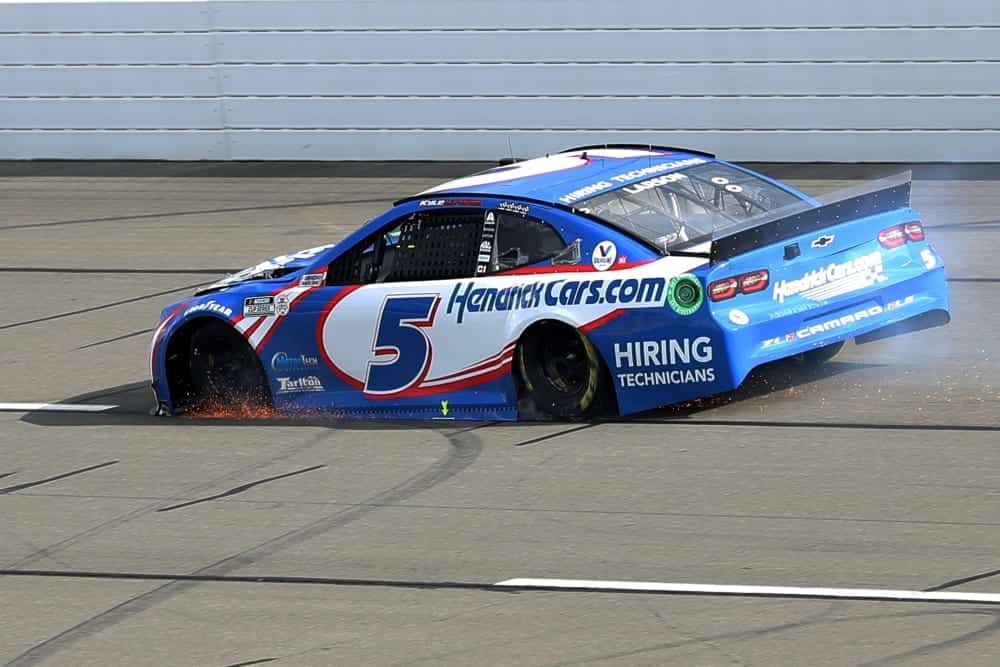 The driver of the No. 5 was riding a streak of three straight points-paying wins and four consecutive triumphs (including the All-Star Race), the most recent win at Nashville Superspeedway last weekend, heading to Pocono Raceway.

Prior to Saturday (June 26) afternoon’s Pocono Organics CBD 325, the first of a doubleheader weekend for Cup at the “Tricky Triangle,” Larson had just two top-five finishes in his past five races there … and the other three dismal finishes were outside the top 20, a streak of bad luck for “Yung Money” at the track.

That is, until Larson’s tire went flat in the final turn of the final lap and sent him hard into the wall, allowing Hendrick Motorsports teammate Alex Bowman to sail by and claim his third victory of the season.

A fourth consecutive triumph would’ve tied the modern-era record for wins in a row. Instead, Larson’s car trundled across the line under the checkered in ninth, smoking and with significant damage to the right side of the car.

NBC Sports cut to an interview with Larson after the race, who stood with a terse smile on his face.

“[It’s a] little bit laughable just because I can’t believe it,” he said. “Hate that we didn’t get another win. Would have been cool to win five in a row. Just wasn’t meant to be I guess today. I felt something right in the middle of the tunnel, wasn’t quite sure what it was yet. It finally kind of shredded halfway through the short chute there. Couldn’t turn.

“Hate that we didn’t get the win. Cool that Alex still did, a Hendrick car with another win. Cool to keep [team owner Rick Hendrick’s win] streak going.”

Larson tried to elaborate on what happened.

“I don’t think there were any tire issues all day,” he said. “I must have just ran something over, I guess. I was having to work really hard to get by [Bowman] – I was honestly happy to see him get to the lead, because I had pulled away from him so much [in] that run up before the caution. But then he was really fast out front, just fast enough I could never get to his inside. He was running low enough, I was a little bit choked down.

“He was starting to get really tight through one. I was able to kind of use that to my advantage, fake him low a little bit, mess his angle up, get him tighter off of one. Was finally able to get by him. Thought we were going to get the win, but we didn’t.”

With Larson’s misfortune, Bowman grabbed his third win of 2021.

“I hate to win one that way, but hell yeah, I’ll take it,” Bowman said.

“[…] We kind of gave the lead away. Were on two tires, just got super tight. Tried to hold him off as long as I could.”

"I don't even know what to think"

If nothing else, Larson expressed confidence heading into Sunday’s event.

“I guess that’s one thing that’s probably keeping me excited and not depressed,” he said, “is that we get to go back again tomorrow. I’m sure our backup car will be just as good as that one. Feel like we learned a lot about our car today, the track came to us a lot. I think we should be good tomorrow.”

What a dramatic ending. We all have seen it happen before but it’s rare that the leader has a problem on the final lap. I was glad to see Bowman win and he did it by beating both Kyles from the inside lane. Unbelievable ending to both the race and Larson’s streak.

It was at that.

Alex Bowman has nothing to feel bad about. Kyle ran over something or he wore out his tires passing him. Larson probably had a better car, but he did something to cause a tire to blow…and that’s racin’. I was rooting for Larson, but that was a really exciting race.

Chase who? He is suddenly the fourth best driver at HMS.
Is it championship lethargy or has Alan finally run his course as a crew chief after winning the series title? Chase does not seem to be driving with the aggressiveness that brought him the title. Could it be the cars or is the 9 combo really the fourth best team at HMS ?