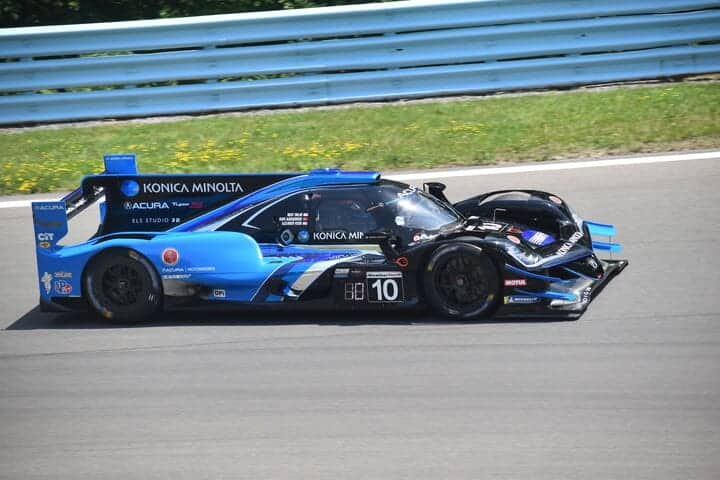 WATKINS GLEN, N.Y. – Wayne Taylor Racing’s Ricky Taylor won the pole Saturday afternoon for the Sahlen’s Six Hours at the Glen with a lap at 135.967 mph.  It is Taylor’s first pole of 2021.  Despite the fact that Sunday’s race is six hours in length, qualifying is still very important.

“Even though it’s six hours, it sounds long, but the way these races go and the way the track flows, track position…is so important here,” Taylor said afterwards.  “It just helps you to control the race,
as far as strategy goes.  It does make it a little difficult because you don’t want to be the first one to make decisions.  [That said,] we wouldn’t trade the pole for anything.”

The session itself was a back-and-forth affair between multiple teams.  Cadillac’s Pipo Derani and Renger van der Zande each took turns at the front of the order before Meyer Shank Racing with Curb-Agajanian’s Dane Cameron went to the top of the order.

The pink and black Acura had been the fastest car all weekend to this point.  However, Taylor dug deep to set the pole lap with four minutes remaining.

Taylor’s lap was one-eighth of a second faster than Cameron.  Van der Zande qualified third, with Kamui Kobayashi and Derani rounding out the top five.

In LMP2, PR1 Mathiasen Motorsports’ Ben Keating dominated nearly the entire session in his Wynn’s-sponsored No. 52.  However, he was pipped right at the checkered flag.

WIN Autosport owner/driver Steven Thomas had a miserable Saturday morning with lots of trouble on-track.  That cost the team practice time due to necessary repairs.

When the time ran low in the session, Thomas was able to dig deep and come up with a lap at 128.431 mph to win the class pole.  Thomas’ lap was less than two-hundredths of a second faster than Keating.  Era Motorsport’s Dwight Merriman will start third in class, followed by Tower Motorsport by Starworks’ John Farano and United Autosports’ Jim McGuire.

LMP3 qualifying saw Andretti Autosport’s Jarett Andretti go quickly early on, but United Autosport’s Austin McCusker set a series of fast laps to put him up front.  On his fourth lap at speed, he turned in a lap at 121.970 mph to win the class pole.  The lap was more than half a second faster than Andretti.  CORE autosport’s George Kurtz will start third, then Performance Tech Motorsports’ Dan Goldburg and Dawson Racing’s Theodor Olsen.

GT Le Mans saw the session dominated by Corvette Racing.  Antonio Garcia set the fastest time on his first timed lap, then only continued to improve.  On his sixth timed lap, Garcia averaged 121.255 mph to win the class pole.  He was three-eighths of a second faster than teammate Tommy Milner.  BMW Team RLL’s Connor de Phillippi will start third, followed by John Edwards and Cooper MacNeil.

In the GT Daytona point-scoring session, Vasser Sullivan continued their assault on the speed charts.  Jack Hawksworth re-asserted his authority on single-lap pace by turning in a lap at 116.482 mph to claim the maximum 35 points for Vasser Sullivan.  Hawksworth was nearly three-tenths of a second quicker than teammate Zach Veach.  Wright Motorsports’ Patrick Long was third, then CarBahn Motorsports with Peregrine Racing’s Richard Heistand and Turner Motorsport’s Bill Auberlen.

In GT Daytona, Vasser Sullivan continued their assault on the speed charts.  After they were fastest in practice Saturday morning, Kyle Kirkwood put the No. 14 Lexus on the class pole with a lap at 115.976 mph.  Kirkwood’s lap was three-tenths of a second faster than Wright Motorsports’ Trent Hindman.  NTe Sport’s Jaden Conwright continues to impress in the No. 42 Audi, qualifying third in class.  Alegra Motorsports’ Daniel Morad will start fourth, while Turner Motorsport’s Robby Foley was fifth.

The Sahlen’s Six Hours at the Glen is scheduled to go green at 10:40 a.m. ET Sunday morning.  The race will air via highlighted coverage on NBCSN Sunday night starting at 7 p.m.  The race will be available via live stream on NBC Sports Gold for TrackPass subscribers.