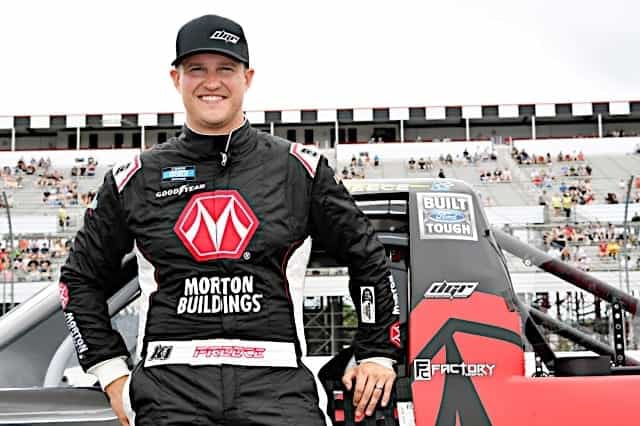 A ninth-place finish Saturday (June 26) at Pocono Raceway didn’t quite compare to the win he claimed at Nashville Superspeedway one week ago, but the results are a solid start to his Truck Series career.

Preece, who drives the No. 37 Chevrolet full time for JTG-Daugherty Racing in the Cup Series, ran as high as third in the CRC Brakleen 150. However, a late restart with six laps to go saw Preece’s No. 17 Ford caught in traffic without enough laps to make up for lost positions.

“You just really needed to have a really fast car on restarts because track position meant so much,” Preece said. “I mean, I was trying to gather runs up and just couldn’t really accumulate anything.”

Preece is known for his success on the NASCAR Whelen Modified Tour, but that hasn’t yet translated into the Cup Series on a regular basis. To get into a competitive truck for David Gilliland Racing and instantly perform has helped his confidence.

“It feels good,” he said. “I guess at the end of the day, we really we wanted to come and win. We just didn’t get that restart to go my way, and just a couple of little things to help speed wise. But overall, can’t be mad with that.”

While no further Truck Series races currently sit on Preece’s calendar, the move to participate in these two events is notable.

Preece’s Cup team entered the season with many question marks, particularly with the absence of a charter. How many races his team would participate in was undetermined coming into the 2021 campaign.

Talked with Brad Daugherty. Ryan Preece car has funding for 24 races, will run as an open car. If they don't get additional funding and get to a point during the year where they feel they are stretching themselves too thin, will then make a decision on what races to skip. (1/3)

As of Saturday, Preece said the team has no intentions of slowing down despite skipping the Cup Series All-Star Weekend at Texas Motor Speedway.

“I think we’re planning on running all the races,” Preece said. “That’s the plan.”

The No. 37 car has two top-10 finishes this season, both coming in the first two races at Daytona International Speedway and the Daytona road course.

Preece enters Pocono 25th in the Cup points standings on the heels of three straight finishes outside the top 20. He ran 26th at Charlotte Motor Speedway, 21st at Sonoma Raceway and 32nd at Nashville following a brake failure.

Preece will roll off from the 31st starting position later Saturday afternoon for the Pocono Organics CBD 325.

Perhaps that’s the series he should be racing steady in.

Cmon Echo, it’s painfully obvious that Preece could thrive in a better Cup ride.
He’s just too classy to point out the obvious. The guy is a diamond in the rough.

Perhaps your right. I think of John Hunter in Cup going nowhere, and now doing great in the trucks. JH is getting recognition now, sometimes it’s best to step back. Lol