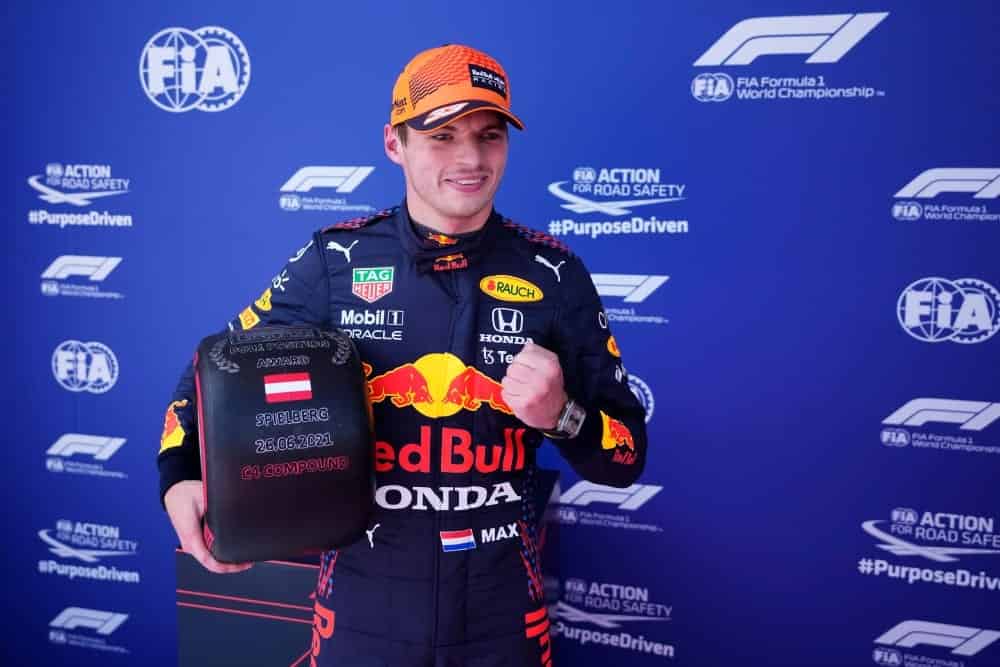 Max Verstappen snatched pole position at the Styrian Grand Prix, taking first spot in qualifying for the second race in a row. The Red Bull driver was the only driver below a 1:04 lap time, putting in a blisteringly quick 1:03.841 run early in Q3. None of the other drivers could come close, with Mercedes’ Valtteri Bottas finishing two-tenths adrift of Verstappen in second.

Bottas will actually line up in fifth, however, due to three-place grid penalty for a spin in the pit lane during FP2. Bottas was experimenting with leaving the pit box in second gear rather than first but lost control and spun, and with McLaren’s pit crew nearby the stewards decided it was “potentially dangerous driving.”

The penalty promotes Lewis Hamilton to second—the Mercedes driver couldn’t improve on his second run, losing heaps of time in the first two sectors before going off-track. Lando Norris also benefits from Bottas’ misfortune, starting third on the grid and looking strong in his McLaren. Sergio Perez follows in the second Red Bull, with Bottas slotting in behind in fifth. Pierre Gasly was less than a tenth of a second behind Perez in his Alpha Tauri, putting him sixth, while seventh belongs to Ferrari’s Charles Leclerc. Gasly’s teammate Yuki Tsunoda was due to start eighth but came under investigation for blocking Bottas in Q3, receiving a grid drop penalty down to 11th. Alpine’s Fernando Alonso qualified ninth but rolls off eighth with Tsunoda’s penalty, while Aston Martin’s Lance Stroll now sits ninth and Williams’ George Russell rounds out the top 10. Russell put in a fantastic lap to get inside the top 10, before gradually falling down the order and missing out on Q3 by just 0.008 of a second

The Japanese driver, who qualified P8, will now start Sunday's race in P11 after impeding Bottas in Q3#StyrianGP ?? #F1 https://t.co/VLr4jwXIkk

The times in the beginning of Q2 were incredibly close, the top 10 spanning just three-10ths of a second. As Q2 ended, Leclerc extracted himself from the elimination zone but his teammate Carlos Sainz only managed 11th, before having his time deleted for track limits and falling to 12th. He starts behind Tsunoda. After Sainz will be Daniel Ricciardo for McLaren, who couldn’t match Norris’ pace, followed by Aston Martin’s Sebastian Vettel, who also struggled and had a time deleted for track limits. Antonio Giovinazzi was 15th in his Alfa Romeo.

Q1 was fairly uneventful. As the session came to a close, both Alfa Romeos, both Haas cars and Russell in the Williams were in the elimination zone. Giovinazzi put in a good lap to go 14th and progressed to Q2, but his Alfa teammate Kimi Raikkonen finished down in 18th. Russell went 12th fastest, with his teammate Nicholas Latifi dropping down to 16th and out of Q1 as the rest of the field improved. Esteban Ocon had a challenging session, finishing in 17th, and the two Haas cars made up the final two spots, with Mick Schumacher beating out Nikita Mazepin.

A couple of weeks ago, the Singapore Grand Prix was cancelled due to pandemic protocols. One of the leading candidates for a replacement was the Turkish Grand Prix, and F1 announced this week that the Istanbul Park Circuit will be rejoining the calendar, with the race planned for October 3rd.

Other possible substitutes had included the Chinese Grand Prix and a second race in the U.S., but the return of the Turkish Grand Prix is an excellent decision by F1. The Istanbul Park Circuit is a favorite among the drivers, thanks to the hilly nature of the land and the track’s width, which allows for experimentation with different racing lines and prolonged battles as the drivers can run side-by-side.

The Turkish Grand Prix was originally run from 2005 to 2011, but came back last season to help fill a schedule ravaged by COVID-19 cancellations and put on a spectacular show. Lance Stroll excelled in a rainy qualifying, capturing his first ever pole, while the race provided thrills as the drivers pushed wet weather tires to the limit on a drying track. Lewis Hamilton also made history, charging from sixth to first to win his seventh driver’s championship, tying Michael Schumacher for the most ever.

Even without rain, the track could play host to some championship drama, appearing in the latter half of the season when it could be make-or-break for Hamilton and Verstappen in their pursuit of the title. Hopefully the pandemic regulations in Turkey stay fairly consistent over the coming months, with the event already being postponed once this year.

This week, F1 also revealed changes to the Yas Marina Circuit, which holds the Abu Dhabi Grand Prix as the final round of the season in December. Historically, Yas Marina has produced boring races, with drivers struggling to follow other cars through the tight final sector, which then hampers their ability to be close enough to pass with DRS on the straights. The alterations have been made with the intention of improving overtaking opportunities.

The first major difference will come as the drivers approach turn 7, a tight hairpin which leads onto the first of two DRS zones. Instead of navigating through the chicane of turns 5 and 6, the drivers will continue straight after exiting turn 4 before reaching a widened version of the turn 7 hairpin.

The track also removed turns later in the lap following the second DRS straight. Although drivers used to brake hard into the narrow, single-file complex of turns 11, 12, 13 and 14, this series of corners will now be replaced by one long banked turn which loops back around to feed into turn 15. The final changes are minor adjustments to turns 17, 18, 19 and 20, which have wider radii to create faster times through that section.

It’s tough to say now whether the revisions to Yas Marina will produce a better race, but the initial plans look promising. The removal of the turns 5 and 6 chicane will keep the cars closer together as they enter the DRS straight, and someone might even try to spring a move after turn 4 as they approach the hard braking zone of the hairpin. The new banked turn after the second DRS zone should be interesting, with drivers perhaps able to experiment with different lines through such a long, sweeping corner. However, the entry won’t be as tight as the old turn 11, reducing the braking zone and possibly making overtaking at the end of the straight harder. The radius changes late in the lap will at least make for a more spectacular camera shot for TV, with the cars apparently going flat-out through turn 20. But with the Yas Marina circuit putting on so many snoozefests in recent years, it’ll be difficult for the redesign to make the racing any worse.

Ought to be an interesting race tomorrow. Think Lewis has a really good chance of taking it. Although this year I believe the Red Bull is a better car.