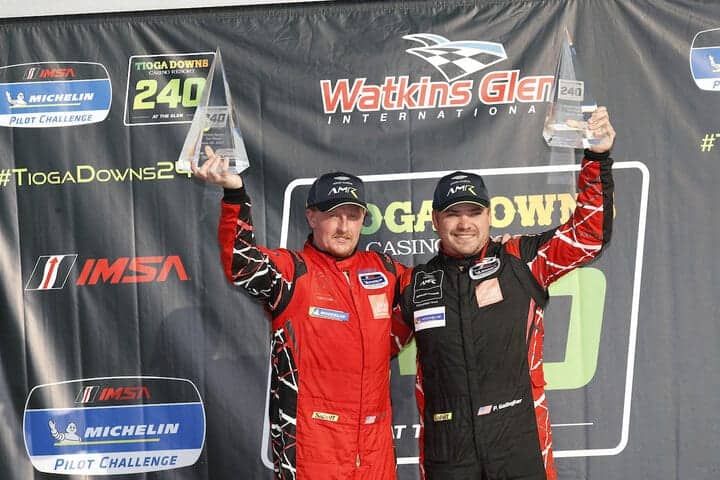 WATKINS GLEN, N.Y. – Notlad Racing by RS1’s Stevan McAleer made a sweeping move to get past Turner Motorsport’s Bill Auberlen exiting the Inner Loop with less than four minutes to go Saturday afternoon (June 26).  From there, McAleer was able to earn himself and teammate Patrick Gallagher the overall victory in the Tioga Downs Casino Resort 240 at Watkins Glen International.

Saturday’s Tioga Downs Casino Resort 240 was far from a clean race.  The first couple of hours were full of substantial incidents that will affect the ability for these teams to be able to come back on Friday.

In the opening laps, Roadshagger Racing’s Gavin Ernstone spun and hit the barrier in turn 7 after contact from TeamTGM’s Ted Giovanis.  Giovanis garnered a drive-through penalty for accident responsibility.  Ernstone ended up with suspension damage that required intervention behind the wall.  Ernstone and teammate Jon Morley would eventually finish 52 laps down in 31st overall, 11th in TCR.

Shortly afterwards, Rebel Rock Racing’s Frank DePew went wide exiting turn 8 and lost control of his Camaro.  The result here was that DePew went hard into the wall to bring out the first yellow.  DePew got out of the car under his own power, but appeared to be walking with a limp.  The Camaro was not ok.

A few laps after the restart, Michael Johnson had contact with Bryan Herta Autosport’s Taylor Hagler, spinning Hagler into the gravel trap in turn 10.  That brought out another yellow and cost Hagler a lap while she had to wait until she was pulled out.

The biggest crash of the race occurred early in the second hour when FASTMD Racing’s Alexandre Papadopulos spun exiting turn 1 and went hard into the outside Armco barrier.  Behind Papadopulos, Copeland Motorsports’ Tyler Gonzalez went wide in turn 1.  He had to swerve back towards the racing surface in order to avoid Papadopulos.  At the same time, TeamTGM’s Owen Trinkler and Gonzalez’s teammate AJ Muss collided, pushing Muss into Gonzalez.  Gonzalez then spun and hit the wall head-on.  Both Papadopulos and Gonzalez were able to walk away from their crashes, but they were done for the day.

The early cautions opened up a series of different pit strategies.  The second caution for Hagler’s spin brought the leaders to pit road.  Motorsports in Action’s Spencer Pigot chose not to stop and took over the advantage.

Once things calmed down, the race was going to come down to a couple of different teams.  One was the Notlad Racing with RS1 Aston Martin.  Another was a similar Aston Martin for Archangel Motorsports.

Riley Motorsports’ Scott Andrews crashed with 52 minutes to go to bring out a long caution.  This saw the leaders make their final stops.  Trent Hindman led the field to pit road, but made an error.  He committed to pit road too late.  This led to a costly drive-through penalty later on.

Repairs to the Armco barrier resulted in a 30-minute caution period.  The race restarted with 22 minutes remaining and Hindman leading Turner Motorsports’ Bill Auberlen.  At the time of the penalty, Hindman had a five-second lead on Auberlen.  Once the penalty was served, Hindman was back to the rear of the top 10.

Auberlen had a couple of seconds over McAleer, but McAleer was able to slowly run Auberlen down.  The battle for the win was relatively short.  It took McAleer about half a lap to make the pass for the win.

McAleer and Gallagher’s margin of victory was just over a second over Auberlen and Dillon Machavern.  Pigot and Sheena Monk ended up third, followed by Wright Motorsports’ Jan Heylen and Ryan Hardwick.  TeamTGM’s Hugh and Matt Plumb were fifth.

IMSA Michelin Pilot Challenge teams will likely spend the next few days in the Watkins Glen area.  With the race weekend at Canadian Tire Motorsports Park