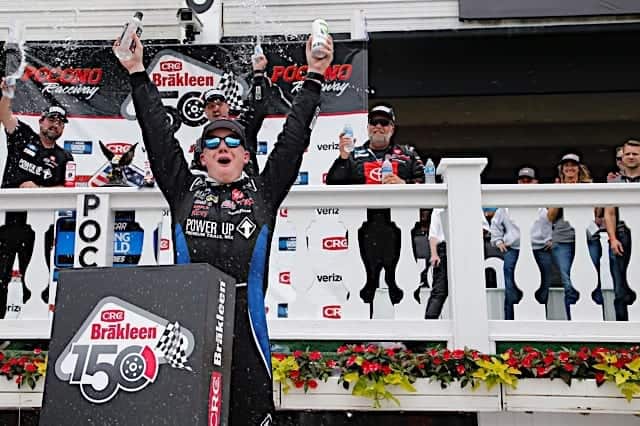 In a Nutshell: John Hunter Nemechek scored his fifth NASCAR Camping World Truck Series win this season when he took the checkered flag more than a second ahead of Kyle Busch. A late-race caution set up a six-lap shootout that saw the teammates restart side by side, and Nemechek took the advantage. Though Busch was closing in, a slip by Sheldon Creed, who was fighting to take second away at the time, allowed Nemechek to sail to the victory. Busch and Creed finished second and third, respectively, while Tyler Ankrum and Austin Hill rounded out the top five.

Zane Smith first took the top spot on a lap 5 restart and went on to lead 18 of the first 24 laps and won stage one. Piloting a strong No. 21 Chevrolet, the GMS Racing team tried to use pit road strategy by making the stop before the end of stage two, but pit road closed before Smith actually made it down there, leaving him to restart stage three at the tail end of the field.

PENALTY: @zanesmith77 did not make it to pit road before it closed in Stage 2.

He'll restart at the rear of the field. pic.twitter.com/n3A5xoR94o

Had the team opted to go ahead and have Smith drive through pit road and stop with the rest of the field, he wouldn’t have served the penalty. When all was said and done, he’d climbed his way back to a respectable eighth-place finish, but it was another race of what could have been for the sophomore driver.

Running outa things to say. Won stage 1, got a pit road or penalty had start last in the final stage still drove up to 8th. So many to pass in such a short amount of time. Fast truck thanks @ArlonGraphics @GMSRacingLLC. Was awesome to see all the fans @PoconoRaceway today!

Though he had hoped to make the full season, Cory Roper and Roper Racing were forced to sit on the sidelines for Pocono due to lack of sponsorship. The team will return in two weeks at Knoxville Raceway with Chase Briscoe behind the wheel.

Statement regarding this weekend at Pocono Raceway

The field didn’t even make it past the start/finish line before the wrecking began. The hard contact with the outside wall ended Jack Wood‘s day before it ever got going. Meanwhile, Johnny Sauter suffered damage that forced him down pit road for repairs. And while the team was able to get him back out on track in time before the damage clock expired, he ended up 35th, five laps down.

Ankrum, in fourth, scored his third top 10 in the last five races and his fourth overall in what has been a rather unremarkable season. He currently sits 13th in the standings, 34 markers behind Chandler Smith, who currently holds the 10th and final playoff spot. With Knoxville and Watkins Glen International sitting ahead of the end of the regular season, Ankrum has two more races to win or hope he can point his way into the championship battle.

“There’s nothing to lose,” Ankrum told Jayski.com. “At this point and time, there’s no reason for us to not have confidence. If we’re going to go into these races with, ‘Eh, let’s get a good run’ we should just pick up and go home. If we don’t have the mentality of grip it and rip it, we shouldn’t.”

For fans who don’t think Kyle Busch should race in the Truck Series, Pocono was his fifth and final 2021 start in the series. He leaves with two wins and three runner-up finishes, all of which were to Nemechek.

Hill’s fifth-place run marked his fifth straight top-10 finish and his 10th in the last 11 races this season. And while he hasn’t won and has just 14 laps led all year, he did clinch his spot in the playoffs regardless of what happens over the final two races of the regular season.

Point Report: Nemechek now holds an 86-point advantage over Ben Rhodes as the regular season championship inches ever closer to its conclusion. Hill is third, followed by Zane Smith and Todd Gilliland to round out the top five.

Creed and Matt Crafton each moved up a position and sit sixth and seventh, respectively. Grant Enfinger dropped two spots after a blown engine. Stewart Friesen and Hocevar round out the top 10.

God blessed @lil_dup and I with Carson Timothy Enfinger a few days ago. It’s been a week I’ll never forget. Mom and son are doing great. pic.twitter.com/aG2C5zTs1U

So we sponsored a truck that'll run in Vegas. If there was a 360 camera and you could log in real time with a VR headset and watch the race as a passenger, would you be in? Rhetorical, it's happening! (via u/Mil_Finance) https://t.co/vzX2j3UCET #NASCAR pic.twitter.com/oAJlXOrdvl

Make it ? wins for @JHNemechek on the season, this time in a 1-2 finish with @KyleBusch!

Solid day for our @LIUNA @GMSRacingLLC @charlesdenike finishing in the top 5 today @PoconoRaceway. I just want 3 more spots ?? thank you to @maLiUNA guys for coming and supporting us today great to have met you all.

Worked our way into the top 10 and had the speed to keep picking up spots, but unfortunately the engine expired. Thanks to all the guys at CR7 Motorsports for another opportunity. Get to spend some good family time, then back in the 98 at Knoxville! pic.twitter.com/IvO9J8aIga

Up Next: The Truck Series takes a weekend off before heading to Knoxville Raceway for its first visit to the dirt track. Qualifying for the event on July 9 begins at 7 p.m. ET; the race will follow at 9 p.m. ET and air on FOX Sports 1.

Kyle Busch finishes his 5 race truck season, with two wins and 3 second place finishes. He lost to his driver JH, in those three races. And not one writer anywhere thought to go mmmm.
I like both drivers, but come on, this is Kyle Busch in a truck race.

They aren’t going to say anything that would imply that what you see may not be what you think it is.