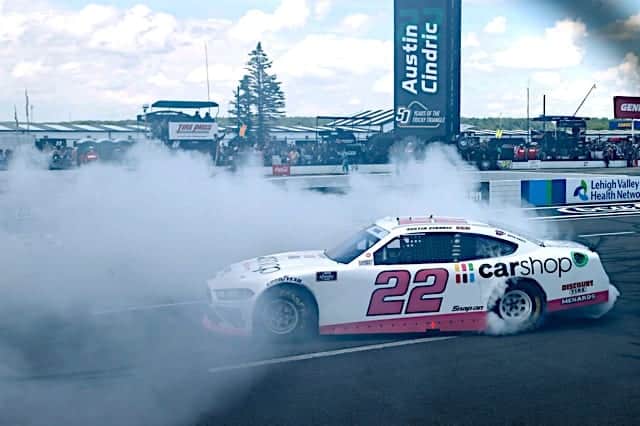 A huge challenge from Ty Gibbs in the closing laps of Sunday (June 27) afternoon’s wasn’t enough to surpass Austin Cindric, and the No. 22 held on to score his fourth victory of the season and first career triumph at Pocono Raceway.

The Pocono Green 225 Recycled by JP Mascaro & Sons was chaotic early and calm late, with a few crashes peppering the opening stages but a long green-flag run closing out the race.

“Well, I didn’t know what happened to the [No.] 66 [of David Starr] there,” Cindric said of the final laps after the race. “I went from a three-second lead to a half-a-second lead, so this thing is never easy. Had to avoid two wrecks today, but it’s awesome. […] I’m over the moon.”

Things hit the fan quickly with a pair of incidents marring the opening laps, starting with a stage one crash involving Santino Ferrucci and Josh Williams. Contact from Ferrucci sent Williams’ No. 92 backing into the fence, but that marked the only incident as Harrison Burton claimed the opening stage victory, his second of the year,

This is not what you want early on if you're @Josh6williams. ? pic.twitter.com/zYvrQ7uV5v

As stage two got underway, a much harder crash occurred on the restart, this time involving Justin Haley and Ryan Vargas.

Haley was turned by Sam Mayer, the latter in his rookie debut, and spun down across the track, slammed into the inside retaining wall and richocheted back into oncoming traffic. He was hit again by Vargas, destroying both cars, and the initial impact was so hard that Haley had to lay on the track for a few moments after he clambered out of the No. 11 Chevrolet.

A big hit for @Justin_Haley_, who comes back across the track and gets hit by @RyanVargas_23.

Both drivers were able to get out under their own power. #NASCAR // NBCSN pic.twitter.com/E9mdJxHK2T

That crash brought out the red flag as cleanup continued, but things calmed down from that point on.

At least for a little bit. While racing in the top five, Burton did go around while running underneath Allgaier, spinning up into the outside wall. The No. 20 narrowly avoided contact with both Allgaier and Cindric, the latter of whom was running behind the pair.

Hemric had taken the lead by this point, but was hit with a speeding penalty on pit road after he stopped under the caution flag. This gave the lead to Gibbs, who cruised on to win the second stage – also his second of 2021, while the field fanned out in battles three- and four-wide behind him.

The restart featured yet another incident: Riley Herbst went around this time, but not before Cindric and Gragson passed Gibbs for the first and second spots, respectively.

Interesting audio between @rileyherbst and his spotter after his day ends in the Final Stage. pic.twitter.com/Sr1LrqEmxH

That caution gave way to a long, long green-flag run with pit stops the ultimate deciding factor in terms of strategy. Cindric eventually cycled back to the lead with Gibbs trailing, holding a three-second advantage over the No. 54 by the time five laps remained.

That was down to about one-hundredth of a second when the checkered flag flew. Gibbs was the fastest car on track and took advantage of a poor penultimate lap from Cindric, closing up to his bumper in the final turn, but Cindric held on for the win.

“This track was on our kill list since last year,” he said post-race. “There’s a few more of those, so we’re keeping our heads down and we gotta keep getting better. We got strong competition and a lot of racing left.”

A close call for @AustinCindric, but in the end he still walks away with the ?.

Hear from the race winner! ?? pic.twitter.com/MJxr4Vu5Wl

The Xfinity Series will next head to Road America in Wisconsin for the July 4 weekend. The Henry 180 is scheduled for Saturday, July 3 at 2:30 p.m. with coverage on NBC.

I see where Brian Wilson has taken time off from the Beach Boys to be a crew chief.

wouldn’t it be nice ?

asking his wife- help me Rhonda

There you go again, replying to yourself, showing your age, Matilda. You were probably old when The Beach Boys were actually a thing.

“A Double Deuce Coupe, for Team Penske they dri-i-i-i-i-ive…”?