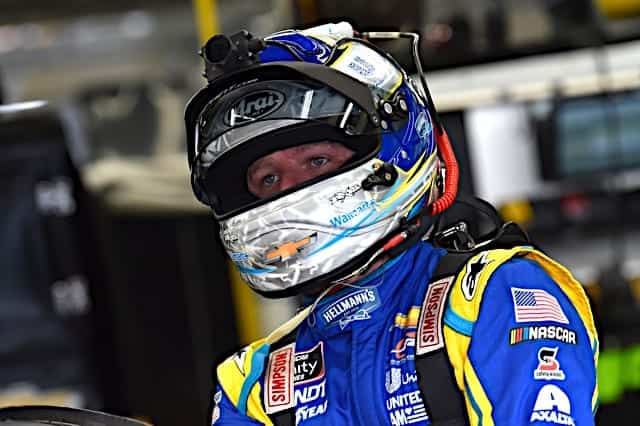 Justin Allgaier, about an hour removed from a third-place finish in the NASCAR Xfinity Series’ Pocono Green 225 at Pocono Raceway, will pilot Spire Motorsports’ No. 77 Cup Series entry in the Explore the Pocono Mountains 350 on Sunday (June 27) afternoon.

Justin Allgaier spoke to Spire executive after Xfinity race. He will drive the No. 77 Cup car today. Out of abundance of caution, Haley will not race after wreck today. pic.twitter.com/wb4Fa08GSp

Justin Haley was originally slated to drive the Chevrolet, as he has for much of this season, but a hard crash on a restart during the Xfinity race put his availability in doubt. Haley was turned by Sam Mayer, spinning down into the inside retaining wall and bouncing off it back into harm’s way. The initial hit was violent enough, but Haley was then hit by Ryan Vargas.

A big hit for @Justin_Haley_, who comes back across the track and gets hit by @RyanVargas_23.

Both drivers were able to get out under their own power. #NASCAR // NBCSN pic.twitter.com/E9mdJxHK2T

The Kaulig Racing driver climbed out of his destroyed No. 11, but was lying on his back by the time safety personnel reached him. Haley got up and went to the infield care center under his own power, but was clearly shaken by the crash.

Justin Haley says he could race the Cup event but it will be up to Spire Motorsports, which has not made a decision yet after his hard hit.

He describes his Pocono wreck and how he is feeling: pic.twitter.com/2zXApn20Kp

Allgaier has 77 total Cup starts under his belt, primarily in 2014 and 2015 for Turner Scott Motorsports, but has made just one appearance at NASCAR’s top level in the past five years. That was at Indianapolis in 2020, when he substituted for Jimmie Johnson in Hendrick Motorsports’ No. 48 after Johnson was sidelined by COVID-19 protocols.

Allgaier gets a feel of the seat of the Spire No. 77. He will replace Haley today. Haley is OK but out of abundance of caution, Allgaier to race today. pic.twitter.com/HgAiSJSiyb

The Explore the Pocono Mountains 350 is set to get underway shortly after 3:30 p.m. this afternoon.