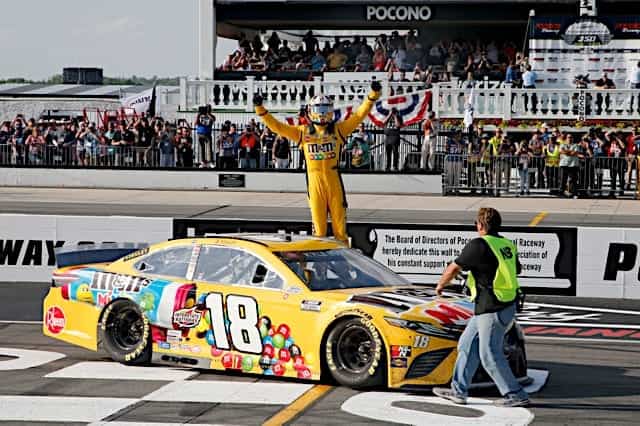 Halfway through the Explore the Pocono Mountains 350 at Pocono Raceway on Sunday (June 27), Kyle Busch‘s day took what seemed like a downward turn.

Busch suffered transmission problems and his car wouldn’t go up through the gears properly, forcing driver and team to stick the car in fourth gear for the remainder of the race. And then it turned into a strategic fuel mileage contest.

The No. 18 passed William Byron and teammate Denny Hamlin in the last several laps as both competitors pitted. Busch gambled, saved as much as he could and coasted under the checkered flag for his second win of 2021, eight seconds ahead of second-place Kyle Larson.

Busch didn’t have enough fuel to get the car to victory lane.

“Stuck in fourth gear, about out of gas,” Busch said with a chuckle in his post-race interview. “Just saving, just riding, playing the strategy the best we could with what was given to us […] Sometimes these races aren’t always won by the fastest car, but I felt we had the fastest car.

“Even though we were in the back and behind, and having to come through and persevere through being stuck in fourth gear, no clutch, all that stuff. It’s all burned out. Nothing left […] Really great to pull off another win here at Pocono. Feels good.”

Saving fuel … and the 1️⃣8️⃣ was stuck in fourth gear today! @KyleBusch recaps a wild win at @PoconoRaceway! pic.twitter.com/MTQjTsTjz8

It was Busch’s second win of 2021 and first in nearly two months after winning Kansas Speedway in early May. The win also snapped Hendrick Motorsports’ six-week winning streak, on the heels of Alex Bowman’s victory in Saturday’s race.

After the inversion of Saturday (June 26) afternoon’s top 20 finishers, Chris Buescher and Michael McDowell led the field to green. The yellow flag flew early for Anthony Alfredo, who lost his No. 38 Ford into turn 1 and smacked the wall.

Martin Truex Jr., after a dismal 18th-place run in the first race of the doubleheader, sailed to the lead and won stage one.

WHAT A MOVE!@WilliamByron fights to get his lap back right as Martin Truex Jr. wins Stage 1. #NASCAR // NBCSN pic.twitter.com/4f1nJWAb04

The younger Busch brother ran well early but started to have transmission issues and the team began working on diagnosing the problem.

Problem for @KyleBusch. Says the transmission keeps popping out of 4th gear and he needs to pop it back in.

Says "We might not be able to make it." Team coming up with a plan.#NASCAR @PoconoRaceway

Busch also led for several intervals during green-flag pit stops during the stage two, pleased enough with his car at one point to channel his inner Steve Miller Band on the radio.

Byron, though, cycled around to the lead and took the victory in stage two.

Busch’s team kept working on the transmission problems and timed it so the No. 18 wouldn’t fall a lap down, finishing work quickly in order for him to get out in front of the pace car several times.

Watch as a @JoeGibbsRacing crew member climbs into @KyleBusch's car to try and fix it. #NASCAR

Will it work? TV: NBCSN pic.twitter.com/D0NzY27BKW

The final green-flag run mirrored last week’s race at Nashville Superspeedway but was even more of a fuel-mileage race. Bowman, looking for the doubleheader sweep, waged a ferocious battle with Harvick until both had to eventually pit, handing the lead to Keselowski.

The No. 2 stayed out for ages but stopped with less than 10 laps to go, escaping pit road ahead of Harvick, who could for sure make it to the checkered on fuel.

Byron stayed out and did everything he could to save fuel, including drafting Corey LaJoie as the No. 24 sat 11 seconds ahead of those who stopped. Hamlin, Kyle Busch, Larson, Kurt Busch and Wallace were all playing the same strategy of staying out as the laps ticked down, with the two Joe Gibbs drivers chasing down Byron in a hurry with four laps remaining.

The two Toyota stablemates briefly battled before Hamlin ran out and swung his car onto pit road. Busch took the white flag all by his lonesome out front and with few cars to save fuel off of but milked every bit of fuel it had and rolled under the checkered flag to claim the victory.

“The biggest thing was trying to time the restart right,” he said after the race. “Leave pit road, come back around, be at full speed by the time the field takes the start/finish line. We were a little bit off on that, we were from here to pit road off on that.

“That’s about all we could do, that’s all you could think about doing in that situation, just thinking through any opportunity and obstacle that’s on you. That’s just what we did.”

The Cup Series heads northwest this week, traveling to Road America in Wisconsin for some left and right turns at the 4.048-mile, 14-turn layout. Coverage will be on NBC on Sunday, July 4 at 2:30 p.m.

Agree. Both races had memorable finishes. It’s rare that the leader has a problem on the last lap like Saturday and, while fuel mileage races happen a couple times a season, I don’t think I’ve ever seen a driver that had a car that was one restart away from being at the back of the pack prevail on fuel mileage. One caution would have doomed the 18 because he couldn’t restart normally.
Who’d have thought that both Pocono races would have as much drama as they did. They are usually duds.
Glad Hamlin did his usual choke job.

They are usually duds. We got lucky and enjoyed two good cup races this weekend. I’d say the fans in the stands got their money’s worth.

I agree. I wasn’t looking forward to the race weekend at Pocono, but it exceeded my expections.

Nice to see that Yung Wonder Boy is the same as everybody else when he gets stuck back in traffic.

Two things…
First…. Last week this was your comment…..
“jobe
June 23, 2021 3:11 pm
What will be interesting this weekend is to see if anybody tries to secure the 20th finishing position on Saturday, thus earning the first starting the first starting spot on Sunday, per the rules for the doubleheader.
Race for points in the first 2 rounds, then drift back and try for P20.
To me, this would be the only way to have a chance to beat Larson’s vastly superior car.”

So which is it… does he have a vastly superior car or is he the same as everyone else? If his car is vastly superior then it shouldn’t matter. What a load of BS you constantly throw out there and act like you know what you’re talking about.

Secondly, by continually using the word”Yung” instead of the correct “young” when referring to Kyle Larson you are using a slang racial slur (sort of like Trump’s “Kung Flu” which I bet you hated). I think you are prejudice against Asian people. How quick you were to call the comment in the Bubba article a KKK racist but apparently your high moral standards are only applicable to others. In your double standard world Asian people are OK to make fun of I guess.

“Yung Money” is Larson’s nickname. I certainly didn’t make it up. Just Google it, genius! You can even buy tee shirts and hats with that nickname on it.

Why Is Kyle Larson Also Called ‘Yung Money’ by His NASCAR Competitors and Fans? – EssentiallySports

“His nickname came about because of his adaptability in any racing series… Interestingly, the Yung Money tag came in his early USAC career, courtesy of a series official. Apparently, they recognized his talent and helped him cultivate it.”

Secondly, I am not prejudiced against Asian people. I came to dislike Larson before I even realized he was Asian-American. I am probably the most indifferent to racial makeup as anyone could be. I didn’t even realize Meghan Markle was Black even though I watched her TV show for years.

And it is clear that Larson’s car has been superior in the races he has dominated. Only a complete fool would believe otherwise.

What is the same about him as everybody else is that as a driver, he can’t overcome circumstances, even though you seem to believe he is some kind of deity. He couldn’t overcome a blown tire and he couldn’t overcome running mid-pack today. Just like any other average race driver.

And since you are so into digging up old quotes, here’s one from FS writer Bryan Nolen following Larson’s win in the All-Star Race:

The NASCAR Cup Series traveled to Texas Motor Speedway on Sunday (June 13) for the first time as the host of the All-Star Race and who took the checkered flag but none other than Kyle Larson. Was this a surprise that Yung Money found another way to get to victory lane? Frontstretch‘s Bryan Nolen and Adam Cheek discuss this and more.

I am sure I can find more, but I am tired of having to respond to your personal attacks on me.

I’ll stop attacking you when you stop attacking everyone else.
Until then I will keep doing everything I can to get under your skin. I have decided to make you a project.

Here’s another “racist” quote on Twitter from NBC Sports:

And the hits keep coming. Here’s an exchange between us from June 14:

I wonder where you got the “Kung Flu” line. From me, of course!

As someone previously wrote…There you go again, replying to yourself.

If you could read, you would see that all my posts here are tagged “Reply to Bill B.”

lololol you are definitely in need of Prozac, a double dose. Are you in Hawaii. Your writing reminds me of an IT that wrote a few articles on here.

Keep guessing, Matilda. You were half a continent wrong last time and now you’ve crossed half an ocean and are even more wrong. I think you and Billy Bob are the ones who need Prozac or more likely Thorazine.

Why couldn’t it get stuck in first gear? But then Hamlin would have won. Talk about the lesser of two evils!

Would love to know how in the heck Blaney, Harvick, and Bowman, could not make up any time on the fuel saver guys after their respective pit stops. The ticker indicated about a 12 second gap between Harvick and Kurt Busch and it only got down to about 9 or 10 seconds. It makes no sense as they should have been running at least a second or 2 faster per lap.