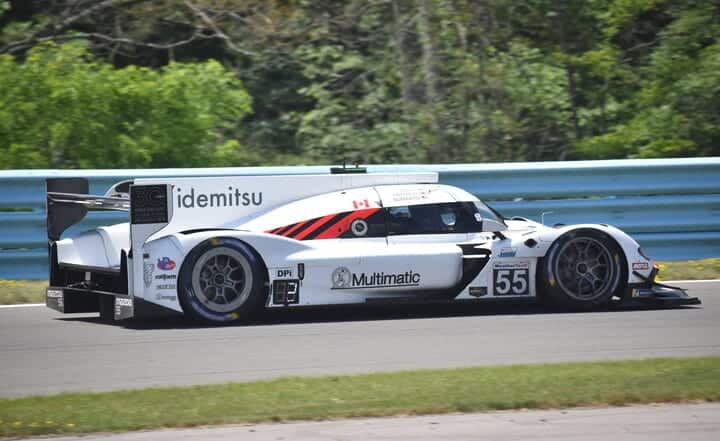 WATKINS GLEN, N.Y. – Mazda Motorsports chose to give Harry Tincknell only one fresh tire on his final pit stop with 51 minutes to go Sunday (June 27).  That allowed Tincknell to beat Meyer Shank Racing with Curb-Agajanian’s Olivier Pla out of the pits.  On the final run of the race, Tincknell pulled away from the pack and held off Pla to win the Sahlen’s Six Hours at the Glen.

“It was a fantastic team effort all weekend, by both Mazda and Multimatic,” Tincknell noted during his post-race press conference.  “We didn’t test here, and we started the weekend off on the back foot.  We just got better and better all weekend.

“To get me out in the lead in the last 30 to 40 minutes of the race, that was a key moment,” Tincknell continued.  “We changed the one tire and got out into the lead.  I knew fuel was going to be really tight and…that I couldn’t go flat out the whole way.”

The action got off to a pretty rough start for Tower Motorsport by Starworks.  On the initial start of the race, John Farano spun entering turn 1 and nosed into the Armco barrier.  He was able to drive the car back to the pits for repairs.  Once Farano was able to rejoin, the car had power problems, resulting in Farano pulling off in the Esses to bring out the first full course caution of the race.

At the same time Farano pulled off, a mechanical issue resulted in a fire breaking out on Cooper MacNeil‘s No. 79 WeatherTech Racing Porsche.  MacNeil was able to drive back to the pits, but could not get to his own stall before the fire intensified.  MacNeil was able to bail out of the Porsche without injury while a number of teams helped put out the fire.  The Porsche was done for the day less than 10 minutes in.

Wayne Taylor Racing’s Ricky Taylor led the field to green, but quickly lost the advantage to Dane Cameron in the Shank Acura.    For much of the race weekend in Watkins Glen, the Acura ARX-05s were the class of the field.  Sunday was no different as the two ARX-05s combined to lead 145 of 197 laps during the race.

Pit strategy jumbled the field for much of the event, but the Shank Acura was never far from the lead.  In the fifth hour, Cameron was able to expand his lead out to nearly 12 seconds over Filipe Albuquerque.  Tincknell was running third, another couple of seconds back.  Then, Gabriel Aubry spun exiting turn 1 and hit the inside wall to bring out the yellow.

Tincknell won the race off pit road and made his fuel hold out just enough to take home the victory.  There wasn’t enough fuel for a cool-down lap, though.  Tincknell ran out of fuel in turn 7, the lowest point on the track, after taking the checkers.  He was fine with getting a ride back in one of IMSA’s Rapid Response vehicles, though.

The No. 48 Cadillac of Jimmie Johnson, Kamui Kobayashi and Simon Pagenaud finished fourth on the road, but were given a post-race drive-through penalty (converted to a time penalty) as a result of contact on the final lap with Chip Ganassi Racing’s Kevin Magnussen.  That contact resulted in Magnussen spinning into the gravel in turn 8.

The LMP2 class saw WIN Autosport’s Steven Thomas run off and hide early on.  Once the Pro drivers got their turns behind the wheel, PR1 Mathaisen Motorsports was able to make significant gains.

The final run of the race came down to a duel between Tristan Nunez and Mikkel Jensen.  Both drivers had to run extremely hard, while at the same time, saving fuel.  Nunez was able to hold off Jensen’s charge to give himself, Thomas and Thomas Merrill the victory.  It is the first-ever win for WIN Autosport, but it didn’t come easy.  Nunez described it afterwards as the toughest race that he’s ever won.

For the first half of the race in LMP3, Andretti Autosport was the class of the field.  However, shortly before halfway, Riley Motorsports’ No. 74 shared by Scott Andrews, Felipe Fraga and Gar Robinson took control.  For much of the rest of the race, the Riley teammates dominated.

The final run allowed CORE autosport’s Colin Braun to make inroads on Fraga, but Fraga was able to hold on to give the No. 74 team their third win of the year.  The margin of victory was 1.635 seconds over Braun, Jon Bennett and George Kurtz.

The second Riley Motorsports entry for Jeroen Bleekemolen, Jim Cox and Dylan Murry were third, while Andretti Autosport’s No. 36 for Jarett Andretti, Marco Andretti and Oliver Askew dropped back with issues and finished a lap down in fourth.  United Autosports’ Austin McCusker, Niklas Kruetten and Edouard Cauhaupe were three laps down in fifth.

With the WeatherTech Racing Porsche eliminated almost immediately, GT Le Mans ended up being a Corvette vs. BMW duel for much of the race.   The No. 4 Corvette of Tommy Milner and Nick Tandy spent the majority of the time up front, with their teammates and the BMWs close by.

The moment of the race came with a little less than 30 minutes to go when Antonio Garcia was able to get past Tandy in the Inner Loop to take the lead.  BMW Team RLL’s John Edwards followed past into second.

For the remainder of the race, Garcia had to manage his gap over Edwards, but he was able to hold on to take the victory.  Garcia and Jordan Taylor ended up six-sevenths of a second ahead of Edwards, Augusto Farfus and Jesse Krohn.  Connor de Phillippi was able to get past Tandy with two laps to go to give himself, Bruno Spengler and Philipp Eng a third-place finish, while Milner and Tandy had to settle for fourth.

In GT Daytona, it seemed like the Vasser Sullivan Lexus entries were going to be the class of the field Sunday.  That did not turn out to be the case.

Vasser Sullivan’s Kyle Kirkwood led the class to green, but Wright Motorsports’ Trent Hindman was able to snatch the advantage away on the first restart.  As a result, Hindman, Jan Heylen and Patrick Long ended up controlling a substantial amount of the race.

It was only in the final third of the event that pit strategy put some new teams at the front.  Turner Motorsport is a veteran team that knows how to play all the cards.  That allowed the trio of Bill Auberlen, Robby Foley and Aidan Read to stick themselves up into contention.

The team placed themselves on an alternate pit strategy late in the race that would have likely still paid off without the caution for Aubry’s crash.  The caution resulted in all of the drivers around them stopping while Auberlen was able to stay out.

Auberlen ended up having Paul Miller Racing’s Bryan Sellers giving chase after the final restart.  Unfortunately, Sellers could not do anything as Auberlen was able to open up a comfortable advantage and hold on for the win.  The victory is Auberlen’s 64th career IMSA victory, extending his all-time record.  For Read, it is his first IMSA victory in his third start.

There is very little rest for the weary.  The next race on the calendar is Friday evening, right back at Watkins Glen International.  The WeatherTech 240 at the Glen is scheduled to go green at 6:10 p.m. ET.  The race will air live on NBCSN and Frontstretch will be there to bring you all the action.