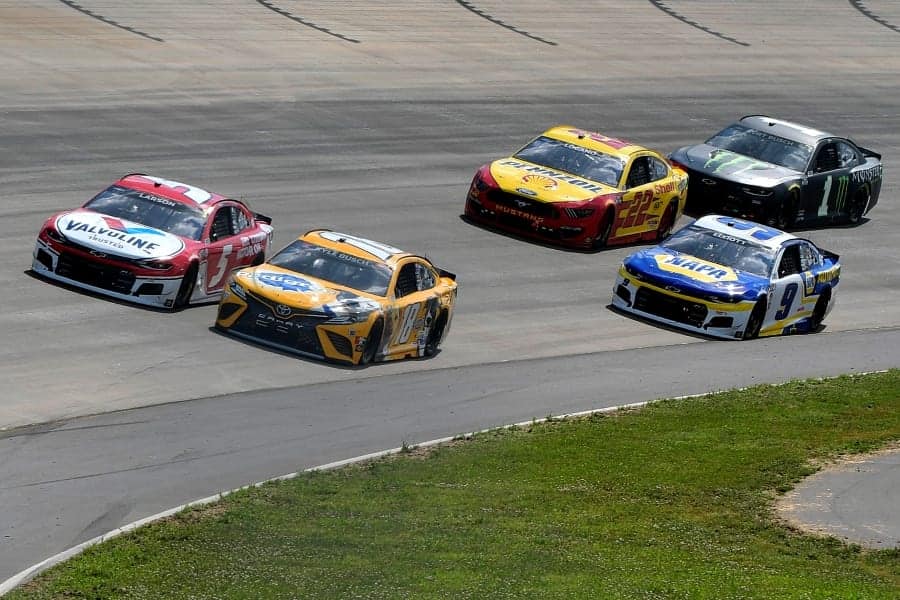 1. Can anyone crash the Hendrick-Gibbs championship showdown?

NASCAR held a pair of Cup Series races at Pocono Raceway this past weekend, and believe it or not, Kyle Larson didn’t win either of them. To be fair, it took a flat tire on the last lap on Saturday (June 26) to make that sentence true. While the second Pocono race turned into an intriguing fuel mileage affair that Larson may also have won had Kyle Busch and his team not figured things out exactly right.

But while someone has to take the checkered flag on the increasingly rare days that the No. 5 car leaves some for everyone else, it’s worth noting that the first one at Pocono was claimed by one of Larson’s Hendrick Motorsports teammates, Alex Bowman, and the other by Rowdy, who of course drives for Joe Gibbs Racing. Through 19 regular season races, Hendrick and Gibbs cars have been to victory lane a combined 15 times, and that’s with Denny Hamlin somehow managing not to contribute to that total so far.

With only seven races left before the playoffs begin, it’s increasingly likely that these two mega-teams will be settling this year’s Cup Series crown among themselves. The top four drivers aren’t guaranteed to be the Championship 4 by any means, but as the only multiple-race winners to date, Larson, Martin Truex Jr., Bowman and Busch are putting themselves in great position to be around at the end.

Can anyone, say, someone driving a Ford, prevent the NASCAR version of Godzilla vs. Kong from taking place at Phoenix Raceway this November? Possibly, but things are trending the wrong way: No non-Hendrick or Gibbs driver has won a points race since Brad Keselowski at Talladega Superspeedway in April. His teammate, Joey Logano, might be the most logical candidate since he’s broken the seeming stranglehold other drivers had on the title-contending spots in the past.

There will be other interesting stories about the playoff field when it’s set, like seeing if both Richard Childress Racing rides make it in, and whether Kurt Busch and Chris Buescher are still in position to fight it out for the final spot. Unless something drastic changes over the next four months, though, here’s hoping you support Hendrick or Gibbs drivers, because otherwise you likely won’t have a dog in that final fight in the desert.

See also
Stock Car Scoop: Who Will be Kyle Larson's Toughest Challenger for the 2021 Cup Title?

2. Did Pocono just put on two good races in one weekend?

As a Pennsylvania native, I have to be up front about my affection for Pocono Raceway, which is essentially my home track even if by car, Dover International Speedway is slightly closer. There’s something refreshingly unique about the Tricky Triangle, and it’s definitely an experience just to stand on the front straightaway and marvel at how it appears to stretch out into the distance forever.

NASCAR fans in general don’t seem quite as fond of Pocono. Whether it’s the three-corner thing or the tendency for races to have stretches where things simply get too strung out, the track doesn’t exactly have a can’t-miss reputation and ranks pretty highly on any unofficial “Which track with two races should lose a date?” straw poll.

Ah, but speaking of polls, The Athletic‘s Jeff Gluck took the pulse of NASCAR fans after the doubleheader, and the results suggest most of them liked what they saw this past weekend:

Was Pocono 1 (Saturday) a good race?

Was Pocono 2 (Sunday) a good race?

(In case you’re reading this before that second poll closes, more than 80% of the respondents thought the second Pocono race was good as well.)

This doesn’t mean much in the grand scheme of things, but it does suggest that at least for 2021 and with the current cars and rules, it was worth keeping two events at Pocono Raceway. And maybe, just maybe, a few more people will look forward to the NASCAR races there in 2022 as well.

3. If restarts are great, maybe stage breaks aren’t that bad …

There’s not much sense in mounting a full-throated defense of stage racing at this point, both because it’s not new any more and it’s pretty clear the majority of NASCAR fans wish stages would go away.

That said, you know what people really liked about these Pocono races? The restarts.

I will say that at the track it felt like a fantastic Pocono race, a lot of different strategies it seemed, drivers losing it, restarts rocked and it seemed like you could pass the leader https://t.co/uM2owMFDfG

Man this race has to be one of the best Pocono races I’ve seen in a long time. We had some good battles, interesting strategy, and exciting restarts.

So let’s look at this from a purely logical perspective: If restarts are exciting (and this goes for anywhere this is true, not just Pocono), you want to see a fair number of them. Stage breaks guarantee you at least two more per race than you’d have without them.

Ideally, we’d have a car and rules package that allows for exciting racing at any time — and maybe the new car will improve things toward that end next year. In the meantime, stages give us a few more restarts to watch every week, so they can’t be all bad, right?

With the benefit of 20/20 hindsight, it’s easy to say now that the preseason expectations for Bubba Wallace were a little ridiculous. Regardless of the big names involved in 23XI Racing, it was probably too much, too soon to think that he’d end up in victory lane in 2021, considering the growing pains experienced by any new race team, much less a single-car organization.

Oh yeah, and there’s the not-so-little fact that Wallace had never won a Cup race before.

But now that we’ve recalibrated expectations, it’s time for a well deserved shoutout for Wallace’s fifth-place result in the second Pocono race, the first top five for 23XI. It’s an important step forward as the team searches for week-to-week consistency.

Now the watch is on for Wallace and the No. 23 bunch to take the next one. It doesn’t necessarily have to be a checkered flag; it could be simply being in the hunt late or recording two or three top fives in a row. Rallying to make the playoffs would probably count as a leap forward. As NASCAR observers, we’ll know it when we see it.

If it happens before the end of 2021, all the hand-wringing about the first half of the season, when Wallace failed to even record a single top 10, can be left behind.

5. Would Ryan Preece be well served by following the John Hunter Nemechek plan and running the Truck Series full time?

It might not seem like it, but Ryan Preece is having his best Cup season to date in 2021. His eighth-place result in the second Pocono race gives him three top 10s in 2021, the earliest he’s ever hit that mark. He’s currently 23rd in the points standings, which would be his best season-ending rank if he can maintain or improve it.

Still, Preece’s future is cloudy. His car has no charter, and finding sponsorship for the No. 37 Chevrolet, by all accounts, has been a grind.

But that’s just his Cup Series reality. Preece is a born racer who drives a lot more than for his day job, and he recently made his first two NASCAR Camping World Truck Series starts. Those worked out pretty well, to the tune of a victory at Nashville Superspeedway and a top 10 at Pocono.

That begs the question: Would Preece consider a full-time Truck Series ride if one was offered?

The Cup-to-Trucks move has been pretty rare in recent years, but John Hunter Nemechek is making it look a lot more appealing right now. Following an up-and-down rookie year driving for Front Row Motorsports in 2020, Nemechek accepted a regular gig for Kyle Busch Motorsports this season. With five wins already under his belt — including Pocono — he’s established himself as the driver to beat for the Truck Series championship.

Going “down” to the Truck Series seems counterintuitive since Cup is the pinnacle of the sport, but winning races and competing for titles is unquestionably more fun and likely more fulfilling than running around in the midpack. Preece knows he can win at the Truck Series level and likely would be a championship contender as well. I’d seriously consider giving him a call if I had a top Truck ride with an opening for 2022, and you’d have to think he’d at least be open for discussing it.