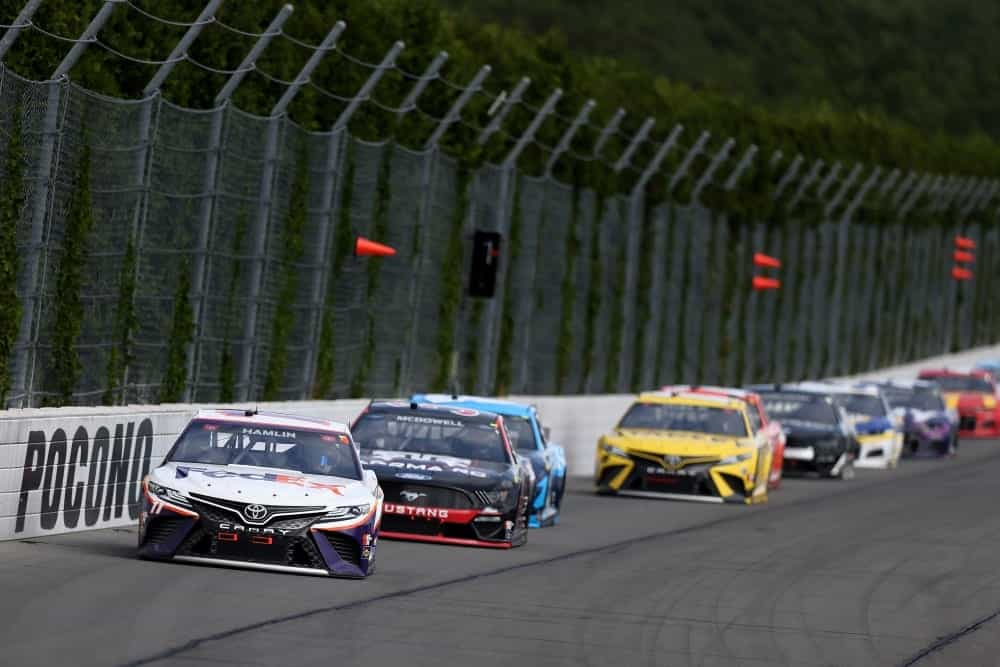 Last year, NASCAR created one of the most exhausting weekends in motorsports with its doubleheader weekend at Pocono Raceway. In reality, it is a quintuple-header with two NASCAR Cup Series races, plus events for the NASCAR Xfinity Series, Camping World Truck Series and the ARCA Menards Series over three days. If you get seemingly any precipitation at all, it’s bad news.

Thankfully, that was last year. This year, everything stayed dry. For today, we’re going to take a look at Sunday’s (June 27) Explore the Pocono Mountains 350. Later in the week, I’ll look at the Pocono Organics CBD 325 in the Frontstretch Newsletter.

Before we get into Sunday’s race, NBC Sports aired an interview Saturday with Kyle Larson conducted by Nate Ryan. Video of the piece is available at NBCSports.com. If the direct link doesn’t work, check out the video page on the NASCAR section of the website. Here, Larson talks about a lot of what he did to atone after getting suspended last year.

The gist of this is that Larson came to the conclusion that he needed to become a better person. Yes, he did the necessary sensitivity training and volunteering with entities such as the Urban Youth Racing School. That was enough to get reinstated by DIRTcar after a month. Then, he went on what will likely be referred as one of the greatest tears of all time in dirt racing.

He wanted more than to just get his job back. The whole situation has changed Larson for the better. Apparently, he used to be someone that could be easily influenced by people with retrograde views about others. He also didn’t take the time to really understand what was coming out of his mouth. You’re highly unlikely to see that out of him in the future. That’s good for Larson, but even better for his kids.

I’ve previously noted that NBC Sports’ NASCAR broadcasts are more cerebral than what you get with FOX Sports. That’s pretty critical for a place like Pocono. Last weekend notwithstanding, the action isn’t necessarily the most exciting. The scalene triangle creates the thinking man’s race more often than not.

As you probably know, Sunday’s race came down to fuel mileage. They were on top of the fuel mileage issue from the very start of the race. The coverage was augmented with radio chatter about what the drivers needed to do.

In a situation like that, you need as much information as you can get. Viewers of NBCSN’s broadcast Sunday knew the pit window by heart. We also saw how long it had been since everyone had pitted and overall pace. In all honesty, William Byron might have been able to win Sunday had the team tried to save fuel earlier. Instead, he drove away from the other top runners on his strategy (Kyle Busch, Denny Hamlin, etc.) by 12-something seconds before dropping his pace off a cliff in a desperate attempt to save fuel. It didn’t work, and Byron lost his whole advantage before having to pit anyway. He ended up finishing 12th.

Viewers learned a fair amount about the fueling systems in Cup cars. Let’s just say that if you were playing a drinking game and the drinking term was “fuel switch,” you and your buddies would have been quite sauced by the end of the race.

The problem with a race like Sunday’s is that it really can be difficult to really tell who’s got a good car. Your position is more or less based on your strategy. Case in point: Bubba Wallace’s fifth-place finish. I’ve seen where a bunch of people are saying that he fell into it due to the fuel strategy — effectively a way to diss Wallace while celebrating his accomplishment for 23XI Racing. Yes, making it to the finish while others had to pit for a splash will help your finishing position.

However, it’s not like Wallace was running around 20th all day. The inversion put him up front for the start of the race, but Wallace was able to stay up there early on. He claimed stage points during the race and was able to run competitively with those who were among the 10 best drivers all day.

Another big storyline was Busch. Of course, he would naturally be a big story since he won the race. How he got there despite a bum clutch and a transmission stuck in fourth gear, I’ll never know. Then again, Alan Kulwicki had similar issues when he finished second in the 1992 Hooters 500 to Bill Elliott and won the championship.

Steve Letarte announced on-air that he had taken Busch out of his fantasy lineup with seven laps remaining in stage 2. Not the best move in retrospect, hence this tweet.

Me traveling home from @PoconoRaceway realizing I took @KyleBusch out of my fantasy lineup…. pic.twitter.com/tpV7QEB3bw

Post-race coverage was relatively brief in Pocono. Viewers got interviews with Busch, Hamlin and Larson before leaving the track. NASCAR America Post-Race was done from Charlotte with Rutledge Wood, Kyle Petty and Dale Jarrett.

Honestly, given his background, I think that NBC Sports should have swapped Wood with Jac Collinsworth for the weekend. Collinsworth spent his time in the infield walking around and chatting with campers (always fun to spend time with people dressed up as the Grinch in June). At least one fan on the broadcast this past weekend was probably a bit disappointed to meet Collinsworth instead of Wood.

The post-race show provided additional interviews with drivers such as Wallace and Kevin Harvick, while the Charlotte trio provided analysis. The show was scheduled for 30 minutes, but was cut short. I’m not sure what the reasoning was there, but NBCSN left the post-race show to go to coverage of the Sahlen’s Six Hours at the Glen 15 minutes early. Viewers were met with the sight of this car aflame.

Wasn’t our day ??‍♂️ Unfortunately we where out early due to a lite contact which was followed by a fire! Fortunately & most importantly @CooperMacNeil got out okay ?? Onto next week for the Sprint round! #Weathertech pic.twitter.com/DsrWn4U0u5

If you’re wondering, yes, the fire on the Porsche at the beginning of the highlight show was extinguished very close to the Media Center at Watkins Glen International. About a minute or two after it was put out, the stench wafted into the building.

The WeatherTech Porsche of @CooperMacNeil came to rest in the pits quite close to the Media Center. The stench of burnt components is just now hitting here.

Thankfully, Cooper MacNeil was OK after that. Hard to believe that casual contact was the root cause of it.

Overall, Sunday’s race was interesting. There was some good racing to be had, but not that much. The strategy is really what would keep people coming back to this race, and there was plenty of it to go around. The explanations of everything that was going on were great. Heck, they described the aerodynamic manipulations of a three-inch air vent during the race since Ryan Blaney was opening and closing a vent on the frontstretch (note: I didn’t realize that the drivers could open and close that vent; I figured that NASCAR would want that vent to always be open since it’s ostensibly for driver cooling).

Also, Letarte apparently stinks at drawing circles. That’s when NASCARCASM put his own spin on Letarte’s lack of skill with a telestrator.

The Olympic rings as drawn by @SteveLetarte. #NASCAR #Pocono pic.twitter.com/vOkITFILLm

That’s all for this week. Next weekend, the Cup Series goes to Road America, a place that has not hosted a Cup race since the 1950s. Back then, Road America was brand new. Now, it has over 60 years of seniority. They’ll be joined there by Xfinity and ARCA.

Meanwhile, Formula 1 returns for a second engagement at the Red Bull Ring in Austria. The NTT IndyCar Series will be at Mid-Ohio Sports Car Course, while IMSA will also be back at Watkins Glen Thursday and Friday, July 1-2. TV listings can be found here.

For next week’s edition of Couch Potato Tuesday, we’ll have critiques of the Jockey Made in America 250 and the Henry 180 from Road America. As noted above, the Critic’s Annex will cover Saturday’s Pocono Organics CBD 325. Hopefully, we can get the Pocono Green 225 Recycled by J.P. Mascaro & Sons in there as well.

I ws surprised to find this was the first time in years that I haven’t fallen asleep during a race at Pocono. I thought they did a good job or covering and mentioning more than the top 10 or 12 cars during the race, and had no problem showing close racing farther back in the pack.

Only two weekends in, but I feel that NBC provides a much better viewing experience than Fox.

There is always some disparity between the two but this year it feels very apparent.

maybe it was because bowyer was on booth for fox. be interesting to see how it shakes out next year.