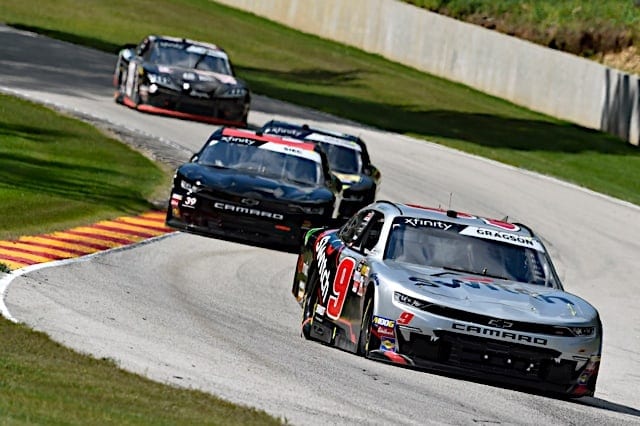 After decades of waiting, Road America’s time has arrived.

The four-mile road course in Elkhart Lake, Wis., will finally be graced by the presence of the top racing circuit in North America: the NASCAR Cup Series.

We’re just receiving some new information into the newsroom.

Sunday will *not* be the first Cup race in Elkhart Lake.

In the season filled with more “inaugural” events than at any other point in NASCAR’s Modern Era, it would be easy to assume the Cup Series had never competed at Road America.

But while the NASCAR Xfinity Series has been visiting Elkhart Lake since 2010, Cup simply took a 65-year break.

Flock led 17 of 63 laps en route to his 39th and final career victory.

That inaugural race was held so long ago, Daytona International Speedway had yet to be built and Richard Petty was two years away from making his Cup debut.

At 4.048 miles, Road America is the longest track on the NASCAR circuit and one of a record seven road courses the Cup Series will visit this season.

Those include inaugural races at Circuit of the Americas last month and the Indianapolis Motor Speedway road course in August.

“It’s certainly better than going to COTA,” Travis Geisler, competition director at Team Penske, said last week. “That one was one where nobody knew what the heck was gonna go on. Our only dry lap on that track was qualifying, and otherwise it was pouring down rain, so that was about worst-case scenario for a brand new place, and nobody had any idea what to expect.

“At least we know a little bit about the track. We know where you race, where the cars fade, where do you have brake issues, the things to focus on. … All of our crew chiefs have crew chiefed at Road America, so that’s a nice thing. At least those guys have been there. They know the track.”

Bullins’ last Road America trip was in 2018 with Austin Cindric.

With four Road America starts and one win (2020) on his Xfinity resume, Cindric will pull double duty this weekend, as he’s entered in Team Penske’s No. 33 Ford for Sunday’s race.

“Road America, I am so excited about,” Cindric said after winning Saturday’s (June 26) Xfinity race at Pocono Raceway. “If I wasn’t driving that weekend, I would be going (as a spectator). I think that part of the country has such a passion for short-track racing, and a Cup race has been absent from that part of the country. That, and Road America is an awesome place and awesome race track. … My brake foot is going to be worn out, but I don’t really care. It is going to be a lot of fun.”

As someone who first discovered Road America through VHS recordings of mid-’90s NTT IndyCar Series races there, I’ve long wanted it to host a Cup race.

Not even the agonizingly long caution laps can dampen my hype for the race.

The Curious Case of Alex Bowman

While it’s fairly recent, a lot can happen in four years. Especially if you’re Alex Bowman.

Before that, you most likely knew of Bowman from the time one of his tires caught fire at New Hampshire Motor Speedway in 2015, or when he infamously learned via Twitter that he’d lost his ride at Tommy Baldwin Racing less than 30 days before the 2016 Daytona 500.

After his victory in Saturday’s (June 26) Cup race at Pocono, in which teammate Kyle Larson cut a tire on the final lap while leading, Bowman is the second-winningest driver at Hendrick Motorsports through 19 races this season.

His three wins this season (out of five overall), have all come from late developments. At Richmond Raceway, Bowman passed Denny Hamlin on a late restart. At Dover International Speedway, his No. 48 pit crew executed the fastest pit stop of the year at the time to help him take the lead from Larson on pit road.

“It feels pretty freaking good,” Bowman said. “I don’t really know what to think. Richmond, when that caution came out, I was kind of bummed. Thought we were going to struggle on the short run like we had been most of that day. Then we came away with a win.

“Here I’m apologizing to my guys, we come out with a win. … It’s pretty interesting to be on the other side of it. … I’ve had my fair share of bad luck over the course of my career. Hence the whole ‘Bad Luck Bowman’ thing. Maybe that’s all behind me and it was just in preparation for this great luck that we have right now. Yeah, I’ll take it.”

Who’s the best comparison to Bowman among his current competitors?

While Bowman wasn’t competing in 2017, Blaney was.

That year, Blaney was in his second of two full-time seasons driving the No. 21 for Wood Brothers Racing (under the Team Penske umbrella). In the June race at Pocono, Blaney held off Kyle Busch and then Kevin Harvick to earn his first career Cup win.

Four years later, while Blaney has 217 career Cup starts to Bowman’s 208, they both have five premier series wins.

While not meant as a critique of either driver, it’s definitely a comparison no one expected to be making in 2017.

Wallace’s new paint scheme of him on hood drinking Dr Pepper and on rear saying eat my bubbles that’s like putting a target on the rear cause someone if not a few will bust his bubbles to get by. They are really promoting a one time 5th place looser.