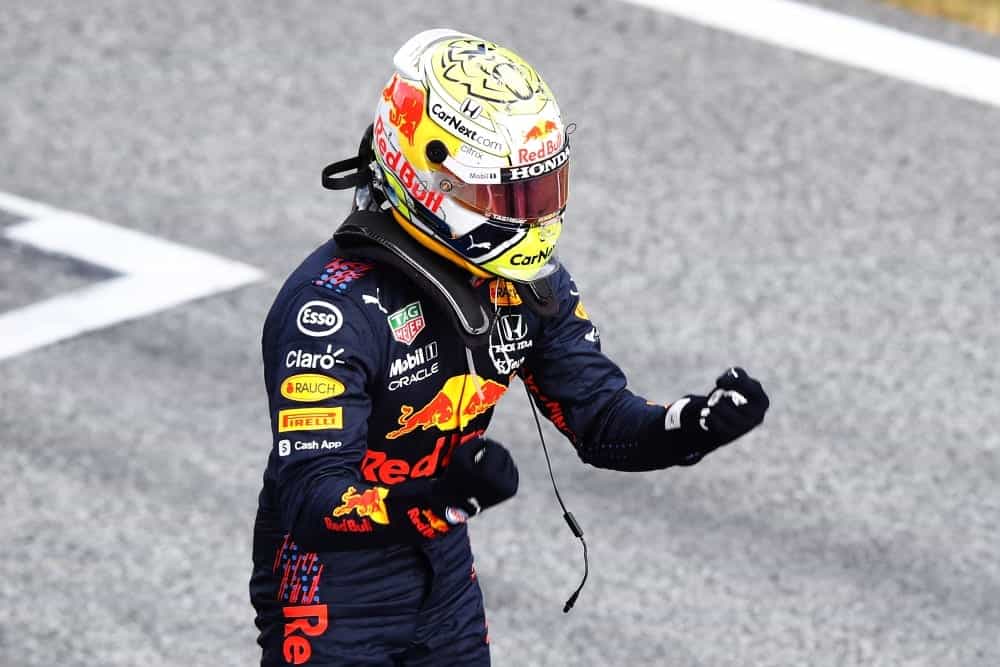 Max Verstappen earned his fourth win of the 2021 Formula 1 season with a dominating drive in the Styrian Grand Prix on Sunday (June 27).  The victory, coming at the Red Bull Ring in Austria, is the 14th of his career and gives him a 156-138 lead over second-place point man Lewis Hamilton in the season standings.

Hamilton did the best with what he had, earning a runner-up finish, while Mercedes teammate Valtteri Bottas held off Sergio Perez to take the third spot on the podium.  With Red Bull taking first and fourth and Mercedes second and third, the constructor’s title sits 252-212 in Red Bull’s favor.

Fernando Alonso managed ninth, showing he still has something left while Yuki Tsunoda earned his third points finish of his rookie year by taking tenth.

What race?  With little other than a mechanical failure to change the outcome, Verstappen had the race in hand by the time he hit turn 3 on the first lap.  He controlled the pace from the get go and there is reason to believe he could have blistered the field by a greater margin.

As for the rest of the field, second spot was settled rather quickly. Hamilton slotted into the position, then found he could outpace everyone behind him but had nothing to offer Verstappen.

The race for the final step on the podium proved to be a fascinating one.  Perez had moved into third after Norris conceded the position in an effort to manage his own race.  Bottas sat behind Perez but had maintained about a two-second gap behind the Red Bull driver.

However, when Red Bull brought in Perez, the team botched the stop, struggling to remove the left rear wheel before sending him out.  Mercedes saw the opportunity and boxed Bottas in an attempt to gain the spot. They gave him a 2.3s stop compared to the 4.8s Red Bull gave Perez, allowing Bottas to get out ahead.

Bottas held on to the position even after Red Bull brought in Perez in the late stages of the race to pursue Bottas with fresh tires.  The strategy almost worked, as it looked like Perez could have passed Bottas – if the race were one lap longer.

Norris coming across the line in fifth does not even come across as a surprise but rather the expected result.  He continues to have an excellent 2021 season and is comfortably fourth in the standings.

Leclerc won the driver of the day award for coming back from his misjudgment of clipping the rear wheel of Pierre Gasly.  Perhaps his teammate should have been given the award because he posted the result with far less drama.

– Credit Red Bull.  The team has given Verstappen the kind of machine that Mercedes has often given Hamilton, and Verstappen is showing that he has come into his own as a driver.  He is flat out driving away from everyone and looks flawless in doing so, avoiding missteps and pitfalls that have caused problems before.  At this rate, he looks capable of claiming his first driver’s title and wrestling control from the seven-time champ Hamilton.

– The Russian Grand Prix will race in St. Petersburg in 2023.  Such a move comes as a welcome change to a circuit that has been drab and failed to provide much in the way of drama.

The Sochi Autodrom used the complex built for the 2014 Olympics and put it to good use but there was always a feeling it would not be a permanent racing site for the series.  The move to the Autodrom Igora Drive, another track designed by Hermann Tilke, will offer a new site that should likely bring more interest and bigger crowds.

– Poor George Russell.  He nearly made Q3 in qualifying but had to settle for starting 11th on the grid.  He showed early pace after lights out and moved his way into eighth, a surprising spot for a Williams car.

As he continued in the position, he even looked to have the measure of Alonso and might move into seventh.  And then it all went wrong.  Russell came into the pits, then suffered through a stop where the team clearly diagnosed something amiss.

Back on track, he was forced into a reliability mode for his engine and was riding at the back half of the field.  The team called him in again a handful of laps later and retired his car due to pneumatic issues.

This one hurt. Every single member of the team should hold their head high today. We were up there on merit. Racing can be brutal but we keep fighting.

Russell has yet to score a points finish with Williams, making a retirement from eighth sting all the more.

– Charles Leclerc has been doing this driving thing for a little while now.  He may be only 23, but he has been involved with F1 since 2016.  He spent his first two years as a test driver for Haas, then drove for Alfa Romeo in 2018 and moved to Ferrari in 2019.

He has earned two wins and has 10 podiums to his credit.  Ferrari has, essentially, selected him as the face of the team for the foreseeable future.  When Leclerc is on, he looks like everything the team wants him to be.

So how could he make such a silly error on Sunday?  The narrative thus far seems to be Leclerc had the drive of the day after falling to 19th at one point and then tearing through the field to finish seventh.  While his accomplishment of earning seventh deserves some respect after falling so far behind, it is the first part of the story that gets overlooked.

Leclerc should never have fallen to the back of the field in the first place.  He messed up his overtake on Pierre Gasly, smashing his own front wing, while helping to send Gasly to a retirement.  Rather than being applauded, Leclerc should have been given a penalty for avoidable contact.  No doubt that Gasly might have a different perspective on Leclerc being feted.

So bittersweet. One of my best performances with heaps of overtakes but should have been higher without the contact with Pierre. A shame about what happened but we've spoken and everything is ok. Our speed looks good for next weekend and thanks for your Driver of the Day votes ? pic.twitter.com/OZ2kJTw3c3

In addition, having started P7, there is reason to question where Leclerc might have finished without the brain blip.  Taking fifth would not have been out of consideration.  Finishing seventh is fortunate for Leclerc but should be looked at more as a save then a spirited drive forward.

How about a shout-out to Lance Stroll.  He started in P10 and came across the finish in eighth.  In doing so, he soundly outdrove teammate Sebastian Vettel on the weekend and also scored his third eighth-place finish of the season.  He has also earned points in five out of the eight races so far and sits 12th in the season standings.  His run at the Red Bull Ring may not seem stunning, but it is a steady result and indicates Aston Martin is picking up form and competing in midpack.

– Verstappen highlighted the gap between Red Bull and Mercedes by saying, “You never know how competitive or how close it’s going to be on a Sunday and, to be honest, I really wasn’t expecting it to be like it was today as the long run pace between the two teams was very closely matched all weekend.”

– Mercedes honcho Toto Wolff acknowledged that the team was no longer bringing upgrades to the 2021 car, stating the focus is on 2022 and the new car.  He was not dismayed by the team’s performance at the Styrian GP, stating “the first race really in eight years where you’re just lacking the pace, where you see that we have stopped developing for this year, because we believe the next years are so important to get it right.”  But Wolff also noted that the fight is not over and Mercedes will still be in contention for poles and wins.

– Gasly stated the obvious yet played it cool by not calling out Leclerc, saying, “There was contact and I completely punctured the whole rear.  I ended up on three wheels or even two wheels at some point, so definitely not what we wanted.”