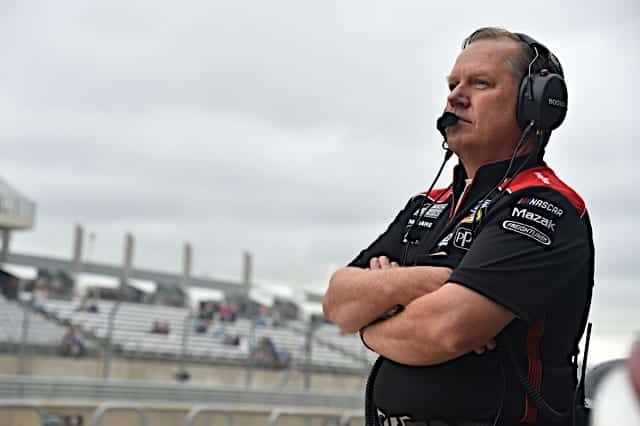 The 2021 NASCAR Cup Series season will be the last call for Todd Gordon, championship-winning crew chief for Joey Logano and current crew chief for Ryan Blaney.

Gordon announced on SiriusXM NASCAR Radio’s The Morning Drive that he would step off the pit box for good at the end of the 2021 season.

“You look at any life, and there’s several chapters in it,” Gordon told The Morning Drive. “And it’s been an awesome run here at Team Penske, and [I’m] really, really happy and fortunate to have the opportunities that we’ve had here.

“But when you look at it going forward, this is my 23rd year down here in NASCAR, 10 years in the Cup Series, and [I] just made a family decision that this will be my last year sitting on the pit box.”

The New York native’s first job as a crew chief was back in 2005 in the NASCAR Xfinity Series for Michel Jourdain Jr. After going through a few different drivers, he served as Jason Keller’s shot caller prior to landing the job for Team Penske’s NXS program in 2011. He won six races that season with Brad Keselowski and Kurt Busch driving and was promoted to the No. 22 Cup car the following season.

Gordon was paired with Logano in 2013; from there, the duo won 21 races and the 2018 Cup title together. A three-way Penske crew chief swap put Gordon with Blaney for the past two seasons, where they have won two races. Blaney sits eighth in the 2021 Cup standings and is a virtual lock for the playoffs.

That championship bid will be the last for Gordon.

“I’m going to make the transition to something else and a new chapter of life,” Gordon said. “Not sure what that’s going to be, but looking to have a little more family time. I’ve got two daughters, one in college, one in high school. … I’m looking forward to just making a little more of a priority out of the family time and see what transpires in the future.”