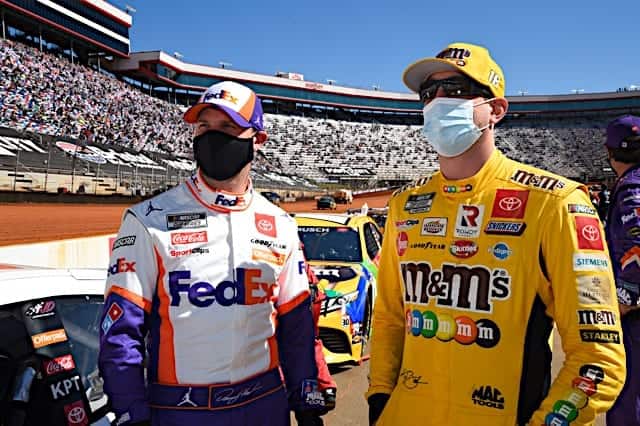 At the end of the 2019 season, Joe Gibbs Racing was fortunate to have three drivers in position to compete for the championship.  Kyle Busch, Denny Hamlin and Martin Truex Jr. had all battled through the playoff gauntlet and were one race away from winning the title.  Hamlin was coming off a win the previous week and was arguably the favorite to hoist the trophy.  But the championship went to Busch instead.  After starting the season fast, only to cool off in the playoffs, a somewhat subdued Busch accepted his second NASCAR Cup Series title.

Even though Busch took home the biggest prize, momentum continued to swing in Hamlin’s favor.  Beginning with the Daytona 500, the No. 11 team won seven times in 2020.  Other than Kevin Harvick, nobody could match Hamlin’s speed week to week.  Even though the championship escaped Hamlin’s grasp once again, it was clear he had emerged from the doldrums of a difficult 2018 season.

Meanwhile, the struggles that Busch experienced at the end of 2019 continued into 2020.  The No. 18 team was still missing its explosive speed from previous years, the kind of speed that allowed Busch to rack up 27 wins from 2015-2019.

While he was never in serious trouble of missing the playoffs, Busch’s mood soured throughout the season.  Still winless when the playoffs began, Busch predicted that his team would get knocked out in the second round.  That was exactly what happened, and it was the first time since 2014 that he failed to reach the championship race as a title contender.  If not for a victory at Texas Motor Speedway in the final weeks of the season, Busch would have gone winless for the first time in his Cup Series career.

Although the momentum shift from Busch to Hamlin last year felt sudden, it was not unprecedented.  Since they became teammates at JGR in 2008, there have been periods where Hamlin and Busch traded off the mantle of Gibbs’ biggest title threat.  Busch had a big-win 2008 season but struggled for a few years afterward as Hamlin pursued championships in 2010 and 2012.  Then, it was Hamlin’s turn to endure a few down years while Busch improved, battling back from injury to win his first championship in 2015.  The latest swing back to Hamlin began late in 2019 as he and new crew chief Chris Gabehart started to click.

Other than a couple years in the mid-2010s when Matt Kenseth was better than both of them, Busch and Hamlin have taken turns carrying the banner for JGR.  Their professional relationship has always had an undercurrent of competition.  It has brought the two drivers into conflict at times, but the one-two punch of Busch and Hamlin has usually kept at least one of JGR’s cars in the title fight deep into the season for the last decade or more.

This year had looked like another one in which Hamlin was going to be Gibbs’ top championship threat.  Although he has not won through 19 races, Hamlin has spent most of the season top fiving the field to death.  He took the overall points lead in the second race of the season and built a seemingly insurmountable cushion.  Busch, on the other hand, got a new crew chief in Ben Beshore and some other new personnel on the No. 18 team.  Still struggling to find speed, Busch had only led 14 laps a full 10 races into the year.  But a win at Kansas Speedway seemed to inject some life into the No. 18 team.  Busch appeared to be back on the upswing.

Then came this weekend’s pair of races (June 26-27) at Pocono Raceway.  Busch finished second to Alex Bowman on Saturday and repeated a mantra from the last few weeks the No. 18 was best in class (the Hendrick Motorsports cars being at the top).  Yet on Sunday, Busch was at the head of the class himself, scoring his second win of 2021.

The key to Busch’s victory?  None other than a faulty transmission.

Before the end of stage two, Busch reported that his car was stuck in fourth gear.  Beshore and the No. 18 team knew they could make some repairs in the car to prevent the transmission from being a nuisance for Busch, but that they would have to do them under caution.  The opportunity came at lap 95, allowing the crew to make the adjustments and add a little more fuel.  Since many of the other leaders, including Hamlin, had stopped one lap earlier, Busch rejoined the race at the back of the pack but with a little extra gas.  That additional lap carried him all the way to the finish when most of his competition had to make another pit stop.

It was an impressive performance for Busch.  He avenged a loss at Pocono in 2015 where he was the one who ran out on the last lap and got passed for the win by Kenseth.  Perhaps more importantly, Busch never got dejected or discouraged.  Before the transmission issue, while he was leading the race with William Byron breathing down his back, Busch was even singing in the car.

There was a time not long ago when the challenges of Sunday’s race would have destroyed Busch mentally.  But the driver who won today was somebody who appeared confident and ready to race for a championship.

“Sometimes, these races aren’t always won by the fastest car,” Busch said, “but I still felt like we had the fastest car.  Even though we were in the back and behind, and having to come through, and persevere through being stuck in fourth gear, no clutch, all that stuff, it’s all burned out. So, nothing left in this M&Ms Minis Camry, (but) it was awesome today.”

Hamlin hung with Busch over the final green flag run, but his fuel tank ran dry coming to the white flag.  A possible win, and a surefire top 10, slipped away without that extra lap of fuel.

“I just do what I’m told,” Hamlin said after the race. “Don’t run when I’m not supposed to run and run when I’m supposed to run, the result is that we’ve pitted on the last lap for three weeks in a row.  That’s tough; I hate seeing the white and coming to pit road.  It’s just so frustrating that fuel mileage has got us the last two weeks and lug nuts the week before.

“It’s part of (racing). I’m really proud of this whole FedEx Camry team, we’re just not getting any luck right now.  And I hate luck in racing terms because you make your own luck, but gosh, this is kind of crazy at this point.”

So, what happens next?  While Hamlin still has the points lead, his once enormous advantage has shrunk to just two points over Kyle Larson.  Losing the points lead would come with a loss of bonus playoff points.  If Hamlin and the No. 11 team want to stay in a good position for the playoffs, they will need to win soon.

As for Busch, it feels like he and Beshore are finally starting to gel.  Overcoming a mechanical failure to win a race is a big feather in the No. 18 team’s cap.  If Busch can find a little more speed, and especially another win or two, he could be very dangerous in the playoffs.  And if Busch returns to title contention, we will look back on this weekend as the beginning of the next momentum shift between Busch and Hamlin.

Nice column, Bryan. While I’m not really a huge fan of either driver, I respect their talent and their passion for racing.