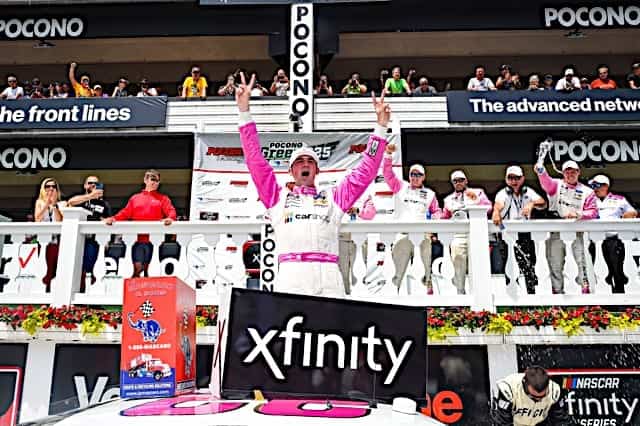 A round of green flag pit stops late in stage three of Sunday’s (June 27) Pocono Green 225 Recycled by J.P. Mascaro & Sons at Pocono Raceway saw AJ Allmendinger beat Austin Cindric off pit road, effectively assuming the lead. But the defending NASCAR Xfinity Series champion bided his time and waited for Allmendinger to make a mistake. When the No. 16 wiggled coming out of turn 2 on lap 74, Cindric took the lead with a pass in turn 3 and didn’t look back en route to his fourth win of the 2021 season.

Leading a race-high 26 laps, Cindric held off a hard-charging Ty Gibbs, despite some lapped traffic causing a stir late and slashing his lead to a few tenths of a second. It was Cindric’s 12th career NXS victory and his 10th in the last 12 months. Justin Allgaier was third, Noah Gragson fourth and Allmendinger finished fifth.

After a four-race stretch (Dover International Speedway to Mid-Ohio Sports Car Course) that saw Gragson have an average finish of 29.5, he now has three straight finishes inside the top 10. That’s the best stretch of results for him since late April and early May.

Gragson left Darlington Raceway, the ninth race on the schedule, seventh in the points standings, 118 points behind leader Daniel Hemric. Four races later, he had dropped to 11th, 234 points back, but more precarious was how close he was to the playoff bubble. After Mid-Ohio, Gragson was only 15 points above the cutoff line.

It’s amazing what a few solid finishes can do, though. Three straight top 10s at Texas Motor Speedway, Nashville Superspeedway and Pocono put Gragson in a much more comfortable 80-point cushion above the cutoff. The season started rocky for the Bass Pro Shops-sponsored team, with four finishes of 28th or worse in the first five races. Then, it was four finishes of sixth or better before the four-race skid.

It’s clear the No. 9 JR Motorsports Chevrolet has speed and Gragson appears to be regaining confidence he seemingly lost. An 80-point gap is nothing to take for granted with 10 races to go in the regular season, but if Gragson can remain consistent, he will find himself with a chance to win the championship.

Meanwhile, it was another solid day for Jordan Anderson Racing with Josh Berry behind the wheel. Berry started 33rd but was up to 17th before the day’s first caution on lap 10, a promising start to the race. Finishes of 10th and ninth in stage one and two, respectively, set Berry up with strong track position to start stage three. And while he wasn’t a challenger for the victory, Berry brought the No. 31 Chevrolet home in ninth. It’s JAR’s fourth top 10 in the last six races after it was shut out of the first 10 when rain canceled qualifying for the season opener at Daytona International Speedway.

Stage two went green on lap 25, but the caution came out before the field even completed a lap. Sam Mayer, making his Xfinity debut in the No. 8 JR Motorsports Chevrolet, was one of six drivers who stayed out under the stage one yellow after pitting under the first caution at lap 10. Closely following Justin Haley, Mayer and Haley got together, sending the latter spinning hard into the inside wall.

Haley then ricocheted back into oncoming traffic, and while much of the field was able to avoid his out-of-control car, Ryan Vargas was not as lucky. He slowed but couldn’t avoid hitting Haley, which sent him spinning into the outside wall before the No. 11 came to a rest.

Haley climbed out and laid on the ground to catch his breath. He later was checked and released from the infield medical center, as was Vargas. Out of an abundance of caution, Haley did not compete as scheduled in Sunday’s NASCAR Cup Series race and was replaced by Allgaier.

Stage 2 of the #PoconoGreen225 is underway and quickly back to yellow with a hard hit involving @Justin_Haley_ and @RyanVargas_23.

Both drivers were able to exit their vehicles under their own power. pic.twitter.com/ANT28z5ScD

The current layout of both the backstretch and short chute are drastic improvements from years gone by. Grass left it difficult to scrub off speed, especially after a classic Pocono rain (watch Dale Earnhardt Jr. and Steve Park’s crash from 2002). Despite the SAFER barriers negating the need for ARMCO barriers, they are too close and narrow up the racing area to a point where accidents like Haley’s will happen again. It may be time for Pocono and NASCAR to look at pushing the barriers further back, allowing more time for a spinning car to scrub off speed and decrease the chances of it being thrown right back into traffic.

Hemric wheeled his Joe Gibbs Racing Toyota to a sixth-place finish, but a pair of speeding penalties will likely be on the agenda for the team’s debrief afterward. He was able to recover from both, thanks in part due to the long green-flag run that spread out the field.

But halfway through the 2021 Xfinity Series season, Hemric has yet to visit victory lane. He and his team did not make these minor mistakes during the first part of the year, which saw him finish inside the top 10 six out of the first seven races. In the previous six events, entering Pocono he had only two finishes inside the top 10. The No. 18 team needs to find its mojo again soon.

Riley Herbst suffered his fourth DNF this season after a crash in turn 2 early in stage three. It’s the story of a difficult season for the No. 98 team that can’t quite seem to find its footing. Herbst now sits 15th in the standings and finds himself 66 markers behind 11th-place Jeremy Clements for the final playoff spot (Myatt Snider in 12th has a win this season). With just 10 races remaining until the playoffs begin, time is running out for this team to get itself in a position to contend for the championship.

It has been three months since Santino Ferrucci climbed into a stock car. Since that time, he competed in three NTT IndyCar Series events, including a sixth-place finish in the Indianapolis 500, and suffered two hard crashes. Ferrucci’s first four races with Sam Hunt Racing resulted in finishes of 30th (Homestead-Miami Speedway), 13th (Las Vegas Motor Speedway) and 15th twice (Phoenix Raceway and Atlanta Motor Speedway). In the nine races since his last start at Atlanta, the team has only finished inside the top 20 three times, suffering through some mechanical issues and crashes.

Ferrucci took the green flag in Sunday’s race at Pocono from the 26th starting position, and he was involved in the race’s first caution, which boiled down to a racing incident. Josh Williams misjudged Ferrucci’s entry angle into turn 1 on lap 10 and clipped the right rear of Ferrucci’s No. 26 Toyota. Ferrucci saved his car, but Williams did not and backed his No. 92 into the outside wall.

After a three-lap shootout to end stage one, Ferrucci was 18th. He continued his climb to the top in stage two and completed the stage in 12th place. He was inside the top 10, but only during green flag pit stops during the final stage. As the field continued to cycle through with 10 laps to go, Ferrucci was 15th before finally being classified 14th when the checkered flag waved.

The Sam Hunt Racing team may only be a 20th-place organization, but when Ferrucci gets behind the wheel, it becomes a top-15 effort. Aside from a pair of performances from John Hunter Nemechek at Dover and Will Rodgers last week at Nashville Superspeedway, no one has matched Ferrucci’s success for SHR.

“This track (Pocono Raceway) was on our kill list since last year. There’s a few more of those. We’ll keep putting our heads down. We gotta keep getting better. We’ve got strong competition and a lot of racing left.” – Austin Cindric

“I feel like you gotta be married to this game to be good, so we’re gonna do that.” – Ty Gibbs

If you love strategy, Pocono was the race for you. There was on-track action and passing while the strategy implemented by the field mixed up the pack. At times, the amount of traction compound applied felt a bit much, while other times, it seemed like the right amount. After last week’s race at Nashville Superspeedway and the resin application, it will be interesting to watch which tracks decide to apply resin over the PJ1 traction compound in the future.

Berry deserves more opportunities with Jordan Anderson Racing. Kaz Grala will be in the car at Road America, but Berry has progressed well from his first start at Daytona this season to Sunday at Pocono. His win at Martinsville Speedway locks him in every race he enters for the remainder of the season, negating the need to have a past champion like Tyler Reddick behind the wheel.

Meanwhile, despite Hemric’s struggles in the past 10 races, he holds a 211-point lead over the cutline, but Hemric needs to win. He and his team need to find a way to put an entire race together. Ty Gibbs has regularly outperformed Hemric and the other two full-time JGR drivers, Harrison Burton and Brandon Jones.

With the NASCAR Cup Series Silly Season a complete unknown at this point, the best way for Hemric to secure his 2022 future with JGR is to win, and win a lot, because Gibbs is undoubtedly going Xfinity Series racing full-time next season. Making the playoffs on points will not be enough for Hemric to earn a second year at Gibbs with the lack of guarantees for Burton and Jones to go Cup racing next year.

We flip our calendars to July, signaling the halfway mark of 2021. Conveniently, Road America is the 17th race of the 2021 NASCAR Xfinity Series season, the halfway point on the 33-race schedule. The Henry 180 will be 45 laps in length and the green flag will drop at 2:30 p.m. ET on both NBC and MRN Radio on Saturday, July 3.

This was a good weekend for stock car racing. I even enjoyed the SRX race Saturday night. I didn’t watch the trucks race, but the cup and Xfinity races were pretty good.