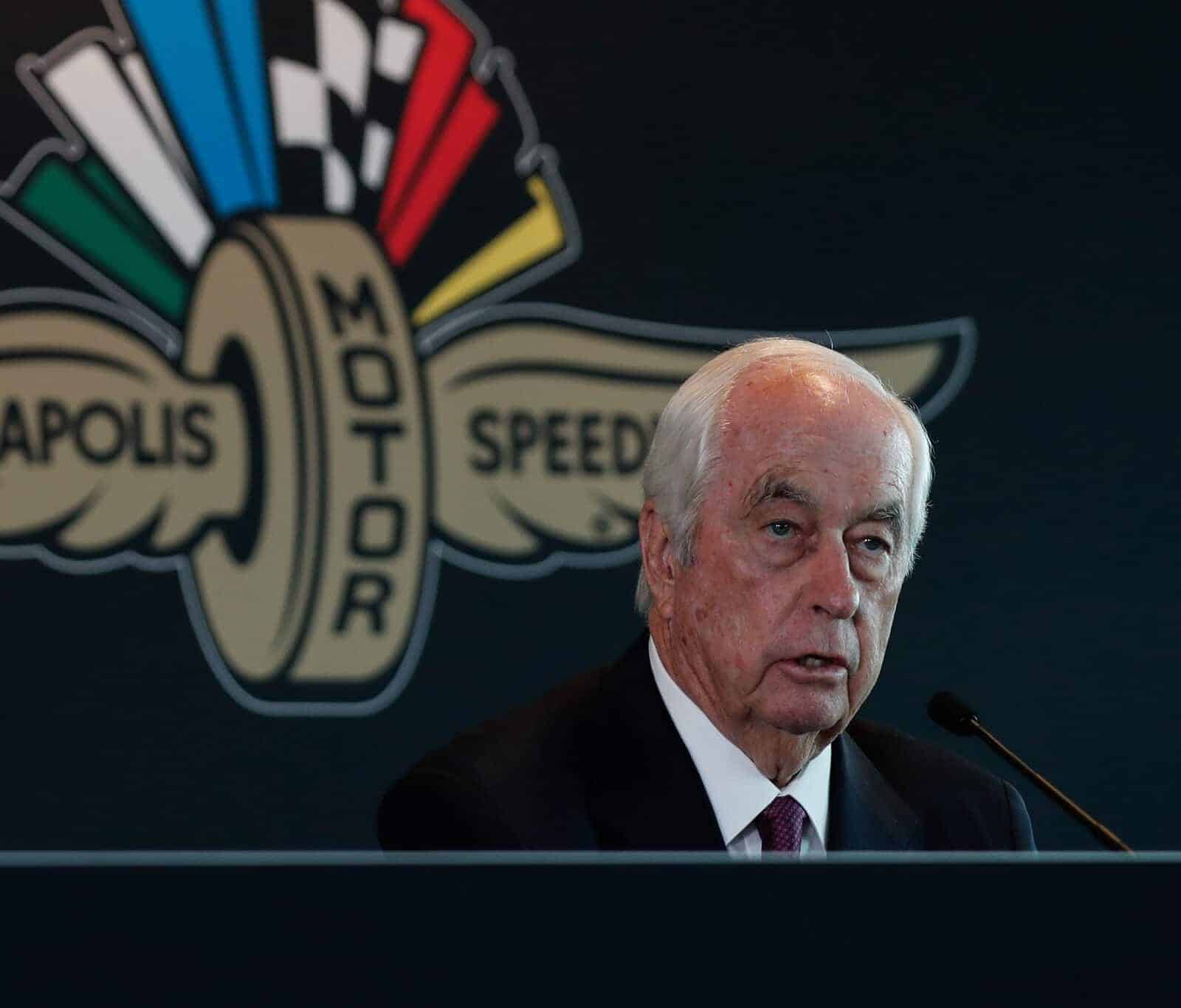 Did You Notice?… Team Penske has gone from 2021 championship contender to a team that’s struggling to keep up? A slow unraveling at Ford’s top organization this season has taken place since news broke Brad Keselowski would be leaving the team in 2022 to become an owner/driver at Roush Fenway Racing.

When that story broke, on May 18, the team was three weeks removed from a Keselowski victory at Talladega Superspeedway. Joey Logano was fourth in the standings, Ryan Blaney sixth and Keselowski ninth; all of them had won and clinched a spot in the NASCAR playoffs.

More importantly, Penske was step-for-step with Hendrick Motorsports and Joe Gibbs Racing. Thirteen races into the season, those teams appeared evenly matched as a 2021, ownership-level version of NASCAR’s Big 3.

Fast forward to the end of June. Penske is stuck on those three victories as the last six races have been won by Hendrick or Gibbs. Their trio of drivers have maintained consistency, in particular Logano, but stop short of running up front. They’ve led 76 laps total during this stretch, with 31 coming from Keselowski during the Pocono Raceway event this past Sunday (June 27). In that race, a fuel mileage finish left the No. 2 Ford in first for an extended period while strategy played out.

The biggest step backward has actually come from Penske’s satellite team, Wood Brothers Racing, where Matt DiBenedetto‘s crew chief Greg Erwin was fired after five straight finishes outside the top 10. Matty D has gone from the final playoff spot, 12 points above the cutline in early May, to 60 points behind it. There’s no clear indication DiBenedetto will be retained, in any capacity, for 2022; sources tell Frontstretch Penske must state their intentions by Aug. 1.

In the midst of sorting that out, there’s another departure announced this week: Blaney’s crew chief Todd Gordon said he’ll retire after the season. Gordon, who won the 2018 Cup championship with Logano, expressed a desire to spend more time with family.

That means two teams minimum within the Penske camp will be changing up a key role in 2022. Matty D getting kicked out would make it three, and as of now, Austin Cindric is scheduled to take over the No. 21. Cindric was announced for the ride last fall, making Matty D a lame duck before Keselowski’s news broke.

Interesting enough, Cindric’s the only driver to win since Keselowski/RFR entered the picture. His fourth victory of the season at Pocono gave the reigning NASCAR Xfinity Series champion a 101-point lead in the current standings. It’s why people think he’s a good bet to wind up in the No. 2, not the No. 21, as Team President Tim Cindric reshapes the organization for 2022.

See also
Fire on Fridays: Here's Who Should Replace Brad Keselowski in the No. 2

Tim, of course, is Austin’s dad. How will Cindric’s placement work next year, and how will people react to him jumping into such a key role at one of motorsport’s largest organizations?

“I’ve done it for the last four years, at least he and I, so I think we have a good process,” Cindric told Frontstretch’s Zach Sturniolo of the family connection. “For him, whenever my name comes up in a meeting, he leaves. Past that, I go about my business and obviously try and win races.

“I think we have a good balance on the team. The guys that I work with on a daily basis are quite comfortable with that, and we’ve obviously been able to overcome it if we had to, at any stages, and had success.”

For their part, Penske knows they’re behind, a struggle to win that also extends into INDYCAR (0-for-9 this season as former driver Helio Castroneves captured the Indianapolis 500). Over in NASCAR, their driving corps has been open about the sudden burst of speed that’s left Hendrick and Gibbs a step ahead.

“They beat us on power and fuel mileage,” Keselowski said after finishing third Sunday. “We have a lot of work to do to keep up with those guys.”

“Wreck ‘em, I guess,” Blaney said to laughter when asked how the team could beat Hendrick. “They’re on top of their game right now, obviously. I thought we got closer at Texas [Motor Speedway] in the All-Star Race. I thought our three cars could run with them at the end.”

That was just before the race at Nashville Superspeedway. Blaney crashed out of that event, then recovered at Pocono (fifth, sixth) only for the news to break about his crew chief retiring. It’s the type of instability we don’t often see within the walls of 84-year-old Penske’s program.

Did You Notice? … The charter market continues to heat up? Rumors are building a mid-tier NASCAR team may be considering a selloff as teams like Trackhouse Racing, GMS Racing, JR Motorsports and 23XI Racing have entered the buyer’s market. We could know who that is as early as today (June 30) at 2 p.m. ET, when Trackhouse is making a major announcement. They’re currently without a charter for 2022, as they’re leasing one for 2021 that’s now headed to Kaulig Racing.

Right now, here’s what appears to be safe when it comes to charters.

Joe Gibbs Racing (4): Frankly, they need another one for Ty Gibbs at this rate.

23XI Racing (1): They’re looking to expand, not sell off, their charter in year two.

Stewart-Haas Racing (4): Haas has the ability to self-fund, listing his automation company as primary sponsor for most races on Cole Custer’s No. 41. Even if Aric Almirola and sponsor Smithfield leave, a sale seems unlikely here.

Honestly? That’s about all I trust right now, leaving 18! of 36 charters unsettled. Sure, there’s plenty of teams who will be keeping some of their charters on that list. Richard Childress Racing, Penske, even Rick Ware Racing … they’re unlikely to be leaving the garage after this season. But can we say for sure each individual team is set for 2022? Tyler Reddick is on a year-to-year deal with RCR. Ware could be in the market to sell and have at least one charter repossessed for poor performance. Kurt Busch is openly talking to other teams outside Chip Ganassi Racing.

See also
Zach's Turn: Corey LaJoie Holding Out Hope for a Teammate in 2022

It makes this Silly Season before the Next Gen car wilder than ever. What’s less clear is how much it’s injected additional money into the market. Dale Earnhardt Jr. told the AP $10 million is what a charter costs, which would still feel like a steal compared to the billions it costs to buy MLB, NHL, NFL or NBA franchises.

Earnhardt found the cost steep but, in essence, perhaps that price is driving the market? If the Next Gen car jumpstarts more interest in NASCAR, the values of these spots on the grid will only go up, right?

Penske said joey would go down n the history books as 1 of the greatest drivers of all time.how with him winning one race a year? Penske let him down,as well as his fans

In light of Chip Ganassi selling his NASCAR operation to Trackhouse Racing and leaving NASCAR entirely, you have to wonder if Roger Penske will also sell for similar reasons. Penske owns the Indycar series and the Indianapolis Motor Speedway so it would be natural if his efforts are directed that way.

I honestly believe that with Penske owning IndyCar now how much does he value the Cup team at this time compared to his other assets.

Penske is a conglomerate. Lots of moving parts going in all directions. He has good people everywhere, but he is getting older. He will make the decision about what he wants to do. I’m sure the man will listen to any good offer before deciding if it makes sense to him.

Very happy to see the Captain and his fat wallet floundering.
I for one think he ruined Indy Car racing when, after getting his ass kicked in F1, started CART. His own private version.
Thanks to Roger today we can’t pronounce the names of most Indy car drivers. Guys from midgets and sprint cars look to NASCAR now.

Last edited 1 year ago by TiminPayson
3
-1

Im sure penske can do whatever he wants. He has a quality cup team and one big benefit people are forgetting, a championship winning Australian supercar team. And that should give his team a leg up on the other teams next year bc the new car nascar is running is real similar to the Australian supercars and im sure he has plenty of people to transfer to his cup teams next year. As far as money goes penske is worth over 2 billion dollars. He could buy and sell mr hendrick anytime.

Tom, Penske hasn’t had the pace to compete with Hendrick – when they hit it – all season. If you really look at their wins, the drivers really deserve the credit. Logan’s won the first race on dirt, Keselowski won a plate race, and Blaney wheeled it at the end on a slick Atlanta track that really doesn’t compare to anything else. They are just down on speed right now, which make Brad’s runs in the All-Star race and Pocono 2 that much more impressive.

Nascar in a whole is failing! Going to keep going in that direction. They killed the local tracks, drivers not be able to afford to even compete. No incentive. All they want from upcoming drivers is your check book. Don’t care what your background or your related in the nascar family tree.

We’ve seen the new guard of drivers over time. It was inevitable that there would be changes in ownership as well. I don’t think this is as significant, in either a bad way or a good way, as some are making it out to be.