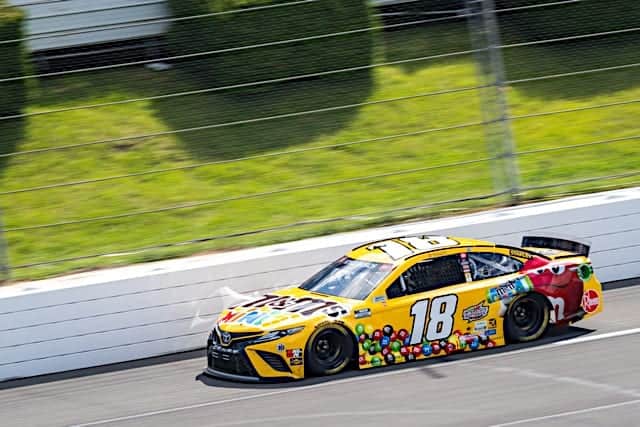 Following the first NASCAR Cup Series race of the Pocono doubleheader weekend, it was found that four Cup race teams failed to secure one lug nut each on their vehicles.

Rodney Childers, Todd Gordon, Ben Beshore and Mike Wheeler have all been fined $10,000 each for their infractions.

Beshore and Gordon are the crew chiefs of Kyle Busch and Ryan Blaney, respectively. Both finished in the top five on Saturda,y with the No. 18 finishing second and the No. 12 in fifth. Busch went on to win race two the next day.

Childers and Wheeler are the crew chiefs for the No. 4 of Kevin Harvick and Bubba Wallace, respectively. Harvick finished eighth while Wallace ended up 14th.

There were no penalties issued for Sunday’s event.

Two NASCAR Xfinity Series teams were also found guilty of improperly installing lug nuts on Sunday. Brian Wilson, the crew chief of the race-winning No. 22 driven by Austin Cindric, and Dave Rogers, the crew chief for the No. 18 of Daniel Hemric, were both fined $5,000 for improper lug nut installation as well. Hemric finished sixth in Sunday’s Xfinity race.

Finally, Joe Gibbs Racing Xfinity crew member Micah Horton has been indefinitely suspended for violations of member conduct. No further details have been released at this time. Horton served as a mechanic for the No. 18 Toyota in the last three races and as car chief for the first 11 in 2021.

When you don’t tighten all your lug nuts you can most likely pick up some spots on pit road to get a 5thplace finish.