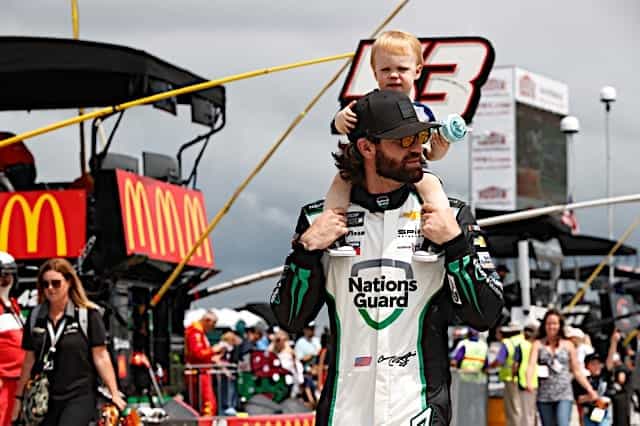 Corey LaJoie knew 2022 would bring a lot of change. How much change, though, remains to be determined.

On June 18, Spire Motorsports announced it had sold two of its three charters to Kaulig Racing as the Matt Kaulig-owned team ventures into the NASCAR Cup Series full-time next season. The charters acquired are currently operated by Spire’s No. 77 team and Trackhouse Racing’s No. 99 team, the latter of which Trackhouse is leasing.

That leaves LaJoie’s No. 7 program as the only definitive entry for Spire Motorsports as of June 29. In May, LaJoie told Frontstretch he’s tied to Spire on a multi-year deal and reinforced his belief in team co-owners TJ Puchyr and Jeff Dickerson.

So maybe it shouldn’t come as a surprise that LaJoie isn’t concerned about what 2022 may bring despite the team’s uncertain status entering the Next Gen era.

“Nobody knows the game as good as TJ and Jeff do,” LaJoie told Frontstretch on Sunday (June 27) at Pocono Raceway. “It’s not far-fetched to say that there’s a possibility that we are not a single-car team next year. There’s a lot of stuff going on behind the scenes that could put us in a different position.”

LaJoie noted he’s having fun at Spire regardless of the team’s charter circumstances right now. With the absence of a teammate though, he admitted the transition to the Next Gen car would be a more significant challenge.

Right now, his usual teammate is Justin Haley in the No. 77 Chevrolet, but the seat has rotated through different drivers as well, including Jamie McMurray, Stewart Friesen, Josh Berry, Ben Rhodes and Justin Allgaier.

The current problem at the shop is that the No. 77’s cars come from Hendrick Motorsports while the No. 7 team utilizes chassis from Chip Ganassi Racing.

“We can’t compare aero notes,” LaJoie said. “We can’t compare pull-down numbers or anything. We can talk about air pressures and the general balance shifts throughout the course of the race, but it’s not like we can compare upper control arm slugs to slugs because they’re not the same cars.”

That would change in 2022 with the transition to the Next Gen car, with all teams receiving parts from common vendors instead of being built in-house.

That’s why LaJoie is hopeful he’ll have another teammate on track with him next season, even if a chartered pathway is unclear at this time.

“The thing that you have teammates for is to grow your notebook, right?” LaJoie said. “And right now, every note that we’ve made for the past 25 years in the sport is obsolete. Now, we still know what makes a racecar go fast in a circle, but in terms of wedge, left-rear spring, trackbar height, all this stuff that we’re working with to make one of these cars go fast aren’t going to apply to the Next Gen car.”

“And you can say that you have an alliance with a bigger team, be that Hendrick or Ganassi, but unless you are wearing the same polo, are in the same hauler or in the same cubicles every week comparing notes, you’re never going to get the latest and greatest information no matter how hard you try to make it cohesive.”

In the present, things are shifting upward for LaJoie’s season. The No. 7 team earned four consecutive top-20 finishes from Circuit of the Americas through Nashville Superspeedway, including a 15th-place finish at Nashville on June 20. That streak came to an end at Pocono when contact with Anthony Alfredo sent LaJoie spinning and crashing into the frontstretch wall, relegating him to a 36th-place result.

LaJoie sits 29th in points after rebounding Sunday with a 23rd-place finish and unquestionably needs a win if he wants to qualify for the playoffs. Chances are slim, but not out of the question.

“There’s still a couple opportunities to throw some Hail Marys and qualify in for the playoffs, obviously Daytona [International Speedway] and a couple road courses that might spice things up,” LaJoie said. “But generally speaking, we’re going to continue to keep learning from the mistakes or things that we learn that are better each and every week and keep applying it and keep executing.”