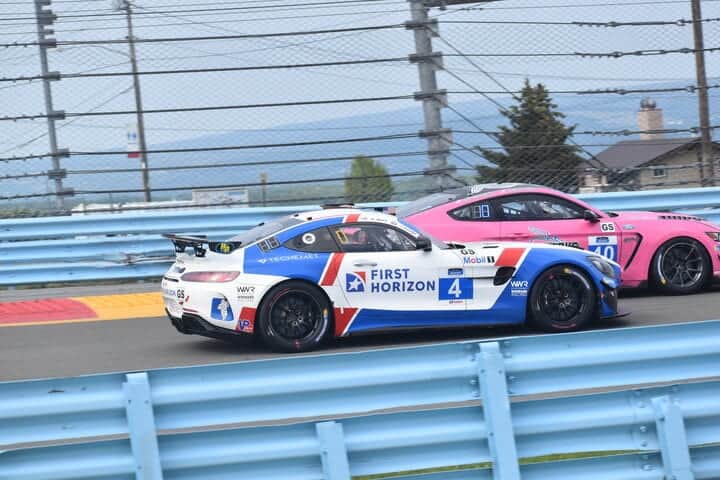 The IMSA Michelin Pilot Challenge teams will also be back at Watkins Glen Friday for two more hours of racing (in reality, most of them never left after Saturday).  There are 36 teams entered for the sprint.

In the Grand Sport class, there are 21 teams entered, down from 24 for last weekend’s Tioga Downs Casino Resort 240.  Teams that are not entered include the winning Notlad Racing by RS1 team from last weekend and Blackdog Speed Shop.  Blackdog Speed Shop has one more race scheduled this year, while Notlad Racing by RS1 may be back for additional events, but it’s unclear if that will happen or not.  Pirelli GT4 America SprintX regular team Capstone Motorsports is not entered.

FASTMD Racing has been forced to go to a backup car after Alexandre Papadopulos’ crash during the Tioga Downs Casino Resort 240.  Luckily, that backup was already on site before the crash.  It was under a car cover during the weekend, but has been unearthed.  As of Saturday, it did not share the red and white colors typically seen on the No. 83 Audi.

Given that last weekend’s race was the second and final four-hour race of the season, there are a number of drivers that are not entered, such as Colin Braun, Kenny Murillo and others.  The only regular driver change of the weekend comes at CarBahn Motorsports with Peregrine Racing, where Sameer Gandhi will step into the No. 93 Audi, effectively replacing the father-son duo of Mark and Nolan Siegel.

In TCR, there are 15 teams entered.  The only team running that was not entered last weekend is Rockwell Autosport Development, which is back for the first time since Daytona in January.  Back then, Nelson Canache crashed their Audi RS3 LMS Club Sport in the International Horseshoe after an apparent brake failure.  Alex and Eric Rockwell will drive.

Gabby Chaves will be back with Bryan Herta Autosport, teaming up with Parker Chase in the team’s No. 98 Hyundai Elantra N TCR.  Chaves, the defending TCR champion, is replacing his teammate from last year, Ryan Norman in the car.  Norman is spending the weekend at Mid-Ohio, where he will be making his NTT IndyCar Series debut.

At Atlanta Speedwerks, Scott Smithson is back in the No. 94 Honda alongside Ryan Eversley, replacing team owner Todd Lamb.  Bit of an unusual story here.  They screwed up the travel arrangements, resulting in Smithson being unable to be in Watkins Glen last weekend.  He’s back now and raring to go.

There is also a new driver lineup at VGMC Racing.  Replacing Victor Gonzalez Jr. and Karl Wittmer are Jon Miller and Lance Bergstein.  Miller has previously competed for ST Racing in Pirelli GT4 America SprintX competition.  Bergstein will be making his IMSA Michelin Pilot Challenge debut after previously racing in Creventic competition both in the United States and in Europe.

The Sahlen’s 120 at the Glen is scheduled to go green at 2:35 p.m. ET Friday afternoon.  The race will be streamed live on NBC Sports’ TrackPass service.