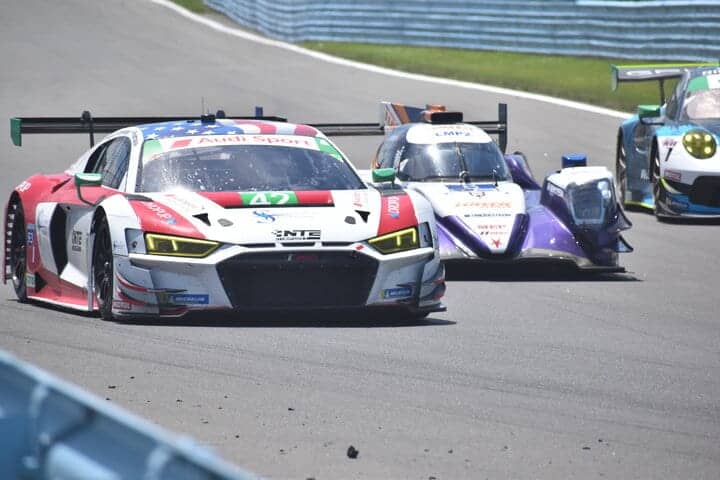 The IMSA WeatherTech SportsCar Championship will be back at Watkins Glen a mere six days after the Sahlen’s Six Hours at the Glen.  However, things will be very different.  Not only is it a sprint race of two hours and 40 minutes, but the weather may be sketchy.  31 teams are entered.

In the DPi class, there will be six teams entered.  Action Express Racing’s second Cadillac is not entered.  All 12 of the full-time drivers are entered.

LMP3 has six entries with the United Autosports No. 2 opting out.  Dawson Racing, which debuted Sunday, will race again with Dominic Cicero and Theodor Olsen.  Still no news on the fate of Sean Creech Motorsport after Lance Willsey left the team.

Performance Tech Motorsports is a question mark for this race, and it’s not because they don’t want to race.  The team suffered an engine failure in Sunday’s Sahlen’s Six Hours at the Glen.  There are currently no spare Nissan engines for an LMP3 car in the United States.  That means that it will be a complete scramble to be able to cobble something together that will allow the No. 38 team to race this week.

GT Le Mans has just three entries, the two Corvettes and the WeatherTech Racing Porsche.  The Porsche has been rebuilt after a fire in the first 10 minutes on Sunday that was caused by minor contact that caused a rub.

Wasn’t our day ??‍♂️ Unfortunately we where out early due to a lite contact which was followed by a fire! Fortunately & most importantly @CooperMacNeil got out okay ?? Onto next week for the Sprint round! #Weathertech pic.twitter.com/DsrWn4U0u5

Naturally, WeatherTech Racing hopes that they will have a much more successful and much less pungent race Friday.

In GT Daytona, there are 13 teams entered.  Much like Detroit, this race will only count towards the WeatherTech Sprint Cup championship.  As a result, two regular teams (PFAFF Motorsports and Magnus with Archangel) are not entered.  They are joined by part-time teams NTe Sport and SunEnergy1 Racing.

There is a brand-new team debuting this weekend.  That is Gilbert/Korthoff Motorsports, a team racing a Mercedes-AMG GT3.  Veteran drivers Guy Cosmo and Shane Lewis will drive.

At GRT Grasser Racing Team, Franck Perera will drive alongside Misha Goikhberg.  Tim Zimmermann was generally considered to be the second full-time driver in the car, but Marco Mapelli drove in his place at Detroit.  Perera was already going to do the endurance events and was in Watkins Glen last weekend.  Unfortunately, Goikhberg crashed the car in the third hour Sunday and caught fire.  It will be a thrash for the team.

Sprint Cup entries from Gradient Racing (this is their own car and not the SunEnergy1 Mercedes that they were supporting) and Compass Racing are back on the grid as well.

This will be a tight two-day show for the IMSA WeatherTech SportsCar Championship.  There will be one practice session and qualifying Thursday.  The race is at 6:10 p.m. Friday and will air live on NBCSN.