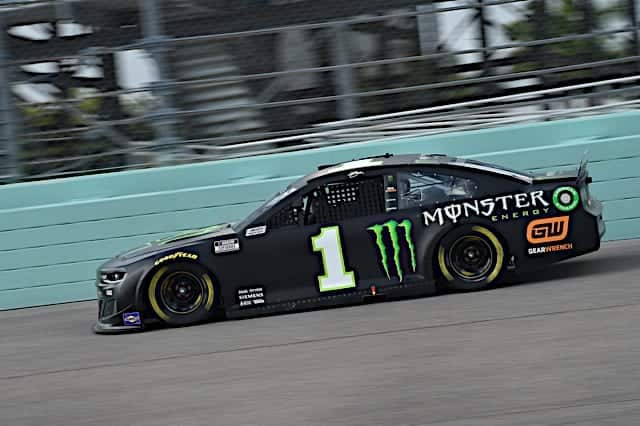 Trackhouse will run the two Cup entries in 2022, including current driver Daniel Suarez.

“I think this is a great day for NASCAR as it seems like there are so many people that are wanting to get into the sport as owners – Michael Jordan, Pitbull, Denny and plenty of others,” Ganassi said in Trackhouse’s team release. “They are bringing new perspective, vision and insight which is great for the sport. NASCAR has been building momentum over the last few years and I am confident that it will continue to do so.

“Also, I can honestly say that my NASCAR team was not for sale. Justin simply came to me with a great offer and an even better vision. As everyone knows, I care deeply for my employees so selling to someone like Justin, who is part of the CGR family, made the reality of selling much easier. He knows our organization and the people. That gives me comfort. Everyone needs to know that I am still completely dedicated to the motorsports industry and will continue to run my other teams in INDYCAR, IMSA and Extreme E with the same enthusiasm that I always have.”

Ganassi has been in Cup since 2001 with its drivers earning 14 wins; Kurt Busch last won at Las Vegas Motor Speedway in fall 2020. From 2009-2013 it was run as Earnhardt Ganassi Racing; Aric Almirola, Juan Pablo Montoya, Martin Truex Jr. and Jamie McMurray all ran for the team during this period, tallying up five additional wins.

See also
Up to Speed: Kurt Busch Rebuilds His Career Through Longevity

CGR currently fields Nos. 1 and 42 in the Cup Series, driven by Kurt Busch and Ross Chastain, respectively. Both drivers together have earned three top fives and nine top 10s so far this season.

“This is a landmark moment for Trackhouse Racing,” Marks said in a release. “It is humbling to know we have secured our position in NASCAR for the next decade. These are never decisions made without a lot of thorough consideration and deep reflection by both parties. This process took several weeks and I want to thank Chip for being so open and candid with me every step of the journey.

“Chip has built an iconic motorsports empire and the Ganassi brand is globally recognized as a winner in the auto racing industry. It is truly an honor that we can build from that foundation. This acquisition provides Trackhouse a platform for years to come, enabling us to field multiple teams, elevate our on-track performance, deliver great value for our sponsors and partners, build lasting community impact programs and continue to grow our brand beyond the sports conversation.”

Suarez has earned one top five and three top 10s so far this year for Trackhouse.

A second driver for Trackhouse in 2022 is yet to be named.

Very happy and excited to be a part of this journey with @TeamTrackhouse. The best is yet to come ?? https://t.co/uadQjaqtwZ

Much respect for @GanassiChip and Felix Sabates on what they have contributed to the sport of @NASCAR for 30+ years. My focus right now is on getting the #1 @MonsterEnergy @TeamChevy into the playoffs, and helping Chip go out a winner. pic.twitter.com/lnVocvspls

Wow, that’s a blind side headline. I don’t remember anyone speculating about this. I guess Chip has had enough. Good for Suarez. Wonder if he keeps Chastain.

Rumors already had KB going to a 2nd 23XI car or 2nd track house. Could he simply just stay in the #1 next year now? Especially if monster stays on board, they would definitely fit the vibe of Track house racing.

If Kurt has any desire to ever be in the booth and FOX offers him the job, is it possible he may retire? There is an opening and if he waits another year there may not be. Bowyer kind of announced his retirement quickly when he was given the opportunity.

Kurt is smart and very knowledgeable. Mmmm. Hadn’t thought about that. It might make sense to him and his wife.

I think Clint Bowyer being there would initially prevent that. The booth would be too inexperienced and the overall product would suffer.

I could see him filling a Jaime Mac role if they call JMac to take Gordon’s place, this way KB can get his feet wet in the actual studio and maybe do some Xfinity series race coverage as well.

The consolidation of Nascar teams, I suppose it could be more accurately described as a reshuffling of the money within the racing community, continues. Expect more of this as the aging team owners reorganize their assets.

Wow. Chip is 63, young compared to Penske and Rousch. I wonder if the next gen car had him thinking about cost. Sponsors harder and harder to get money out of. Suarez has ran well with Trackhouse.

I suppose as good a time to get out as any, with the driver he was pressured to fire laying waste to the competition this year.

I believe Chip when he said his team wasn’t for sale. Sometimes things make sense and you think why not. Glad it worked out for all of them.

If I was Chip I’d have been livid about the driver I was forced to let go of driving for another Chevy team.

He is obviously less of a hot head than me. Because if I were him my team would be driving Toyota’s or Ford’s right now. My Indy cars would be Honda powered and there is no way I field a Corvette in IMSA.

I’m not sure he was forced to fire him – I’d say he caved to the financial and political heat rather than doing the right thing and stick by a good guy who made a small mistake. But Chip’s Indy cars are already Honda powered, and maybe this move is step 1 in clearing the way for him to bring Honda to NASCAR (oft rumored of late).

It’s hard to run without sponsorship money. I don’t blame Chip at all for his decision last year.

I agree, not “forced”, but rather avoided the consequences of doing nothing. Which would have been sponsors and others, such as Chevrolet, dropping him. The world is full of drivers. He did what was in his best interests.

True – although we’re a little over a year from the event, and Chip’s checking out of the sport, while Larson is on top of it – driving a Chevy. Rick believes in and is willing to pay for second chances and for Chip…. karma is a btch.

Hendrick is obviously more capable of taking a financial risk on an unsponsored (or in this case, a self-sponsored team) than Ganassi.

I certainly wouldn’t put it down to a higher sense of virtue on Rick’s part, although he certainly got a second chance when his campaign contributions to Bill Clinton paid off.

Rick may have his own brand of karma to deal with.

Last edited 1 year ago by Messenger
2
0