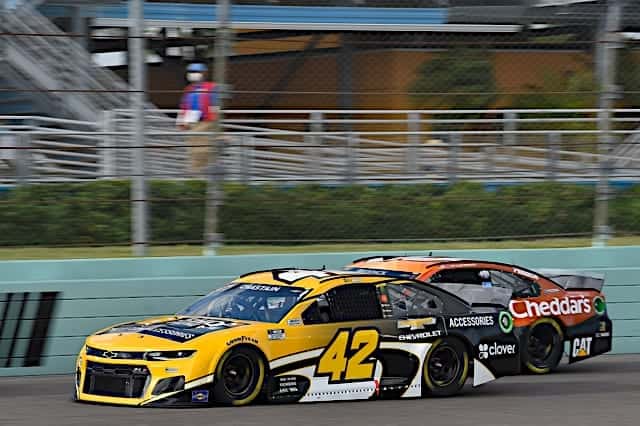 A news bomb was dropped on the NASCAR world Wednesday afternoon (June 30), when Justin Marks and Chip Ganassi announced that Trackhouse Racing had purchased the charters and assets of Chip Ganassi Racing.

Ganassi will leave the series after 21 years as an owner, while Marks’ team he co-owns with Pitbull, Trackhouse, is just getting started. The team will use one of the CGR charters to continue to field its No. 99 entry for Daniel Suarez and will field a second car for a driver to be determined.

Here’s how the transaction will affect each of the parties involved in the sale.

Ganassi’s motto is, “I like winners,” but he’s ending his NASCAR tenure without a whole lot of winning. As of July 1, his cars have won 19 races in 21 seasons, with Kyle Larson‘s six wins for the team being the most by any driver.

Sterling Marlin provided the team with its only top five in points, finishing third in the standings in 2001, CGR’s inaugural season after buying the team from Felix Sabates. The following year, Marlin provided Ganassi with his best chance at a NASCAR Cup Series championship. He led the standings for 25 straight races before losing the points lead late in the year, and a cracked vertebrae in his neck finished off Marlin’s title hopes.

Despite failing to achieve the level of success he’s achieved in other forms of motorsports, Ganassi won’t be leaving NASCAR with his tail tucked between his legs. Instead he’ll be leaving it driving a Brink’s truck filled to capacity with millions of dollars.

Dale Earnhardt Jr. told the Associated Press that charters are going for around $10 million a piece. So Ganassi is making at least $20 million off his charters alone. Then you factor in the race shop and equipment, and it wouldn’t surprise me if the deal reached at least $30 million.

After all, CGR wasn’t for sale until Marks called Ganassi and inquired about it. Marks must’ve dropped a pretty big check in order to buy something that wasn’t for sale.

And maybe this isn’t really the swan song for Ganassi in NASCAR. He’s with Honda in the NTT IndyCar Series, and Honda has been rumored to be coming into NASCAR. Could Ganassi take a few years off and then come back into NASCAR with Honda? Charters might not be going for as much money at that time, so he’d still come out ahead financially.

Who would’ve thought when Marks won the NASCAR Xfinity Series race at Mid-Ohio Sports Car Course that in five years he’d be co-owning a two-car Cup team with Pitbull?

See also
Justin Marks: 'I Don't Want to Get Over My Skis' After Chip Ganassi Acquisition

Trackhouse has exceeded all expectations this season and has even been more consistently fast than the more-hyped-up 23XI Racing. Now that the team is expanding and will have formerly CGR resources, I full expect the team to be battling for wins soon.

And who knows? Maybe author and motivational speaker Tony Robbins could be joining the team in some capacity down the road.

“I think Tony wants to get involved at some level, but this is not the result of any new equity infusion or new ownership or anything like that,” Marks said in the press conference. “We will continue on our trajectory on that ownership and marketing and business development side like we have and then obviously on the competition side this just gives us a lot of support and a lot of big foundation for the future.”

Awaken the giant within. pic.twitter.com/101vbCbTHB

After a shaky start to his Cup career, Suarez finally has some stability.

The fact that Trackhouse remains committed to Suarez amid purchasing the rides of Kurt Busch and Ross Chastain speaks volumes to the belief the team has in him. He may be the driver whose career was the most rejuvenated in 2021, even more so than Larson.

“It’s happened very quickly, but I think that a transaction like this or getting to this kind of moment was certainly probably always in the plan, and when you’re talking about ‑‑ obviously to solidify your future in the sport, the charter is an important thing,” Marks said.

Very happy and excited to be a part of this journey with @TeamTrackhouse. The best is yet to come ?? https://t.co/uadQjaqtwZ

With Suarez staying with Trackhouse, one of the current Ganassi drivers will be the odd man out.

And as one of the top free agents of this Silly Season, Busch has a lot of control over what happens here. He could stay put, retire or go to 23XI or another team. If he stays at Trackhouse, who he mentioned was courting him a while back, then Chastain would lose a CGR ride for the second time in his career due to factors unrelated to his driving.

See also
Fire on Fridays: The Arrival of Ross Chastain

It’s also still possible that Trackhouse could come up with a third charter from somewhere else and run Busch, Chastain and Suarez as a three-car team. Or they could just buck the system and run a third car as an open team.

There’s still a lot up in the air with what will happen to the current Ganassi lineup, but Marks said Busch and Chastain will start as the “top two” candidates for the second car.

DEI formerly fielded the No. 1 Chevrolet for Steve Park, then numerous other drivers before Martin Truex Jr. The team merged with CGR to form Earnhardt Ganassi Racing, which operated from 2009-2013, while continuing to field the No. 1 Chevy for Truex and later Jamie McMurray.

In 2014, the team went back to being CGR, as Theresa Earnhardt no longer had a stake in the team. But it continued fielding the No. 1 Chevy for McMurray and now Busch.

With Trackhouse purchasing CGR and the No. 1 Chevy, Norris is back in charge of one of the three cars he managed back in his DEI tenure. Talk about a long game, and all from the guy who was once banned from NASCAR for his role in Michael Waltrip Racing’s infamous “Spin-gate.”

“This is my 30th year in the sport,” Norris said in the press conference. “I’ve never seen it better. I’ve never seen them communicate better. I’m very proud to be a part of this organization going forward.”

I read that Marks previously bulked at paying an eight figure price for a charter when he was seeking one before this deal. So I’m thinking that he is getting the charters for less than the 10 million they’re bringing since he’s purchasing the whole business.

Looking back on CGR’s NASCAR program, it has been a generally competitive, but 2nd-tier team that followed in the wake of the “Big 4” factory teams – HMS, JGR, Team Penske & SHR. In terms of peers, CGR has been similar to RCR and generally better than RFR in terms of overall performance.

CGR has suffered through several recent setbacks over the past several years that probably made this sale possible. First was the loss of long-time sponsor Target, which had been a rare, full-season team sponsor. Then the DC Solar Ponzi scheme fiasco, where CGR not only lost the sponsorship, but probably had what sponsorship funds that were paid “clawed back” by DC Solar’s bankruptcy court trustee. Then last year saw part-owner and team founder, Felix Sabates retire for health reasons and pull out his funds. But the kicker was Kyle Larson’s inappropriate comment on an iRacing video that forced Ganassi to fire Larson and strained relationships with CGR’s sponsors.

And the near future for CGR looked bleak. Kurt Busch has been looking to shop himself and sponsor Monster Energy to a new, front-running team, or at least a team that will pay him what he thinks he is worth. Ross Chastain has shown some improvement of late, but talent-wise he is more of a journeyman driver than a top-tier star. Also, the McDonald’s sponsorship for Chastain’s team runs out this year and will probably not be renewed.

I agree McDonald’s would not have stayed with CGR, but they may with Trackhouse. Suarez appeals to an important demographic for McDonald’s and having Pitbull involved helps. Might McDonald’s go to 23XI instead? Maybe, but the synergy with Suarez, Trackhouse, McDonald’s, and maybe even Coca-Cola is strong. I bet McDonald’s stays with Trackhouse and splits sponsorship between the 99 and 89. (I’m trying to speak an 89 driven by Chastain and sponsored by Evinrude for at least two races into existence).

If you can avoid using the number of a major Xfinity team, I think it’s optimal. I’ve also never liked how 98 looks. The Curb car in 1987 that ran part-time with Ed Pimm looked okay, but that’s about it for me. Mike Curb has had that 98 forever. 89 is visually more pleasing…and I get my Jim Sauter car. Always liked that 89 car owned by the Mueller Brothers. I’ll admit 1 and 99 creates an alpha and omega vibe.

Interesting points.
I was under the impression that Checy forced Chip to fire Larson. I’m curious how Chevy suddenly changed it’s mind when Hendrick was in play.

Todd, did you host a NASCAR radio talk show in the past? And if so, are you going to be at RA this weekend?

My opinion is that this deal never gets to the finish line. Justin Marks would be lucky to have a net worth of $250K and no way is Pitbull putting any personal monies into this new venture. So where do they come up with $25-30M?? Perhaps GM strokes them a small check for staying in Chevy’s…and Dale Jr’s silent ownership puts more in that pot. But even together, that’s 8M, tops! They’re still short by 22M with no real sponsorship

Look at Justin’s dad’s net worth. At least $150 million, plus even more investors money.