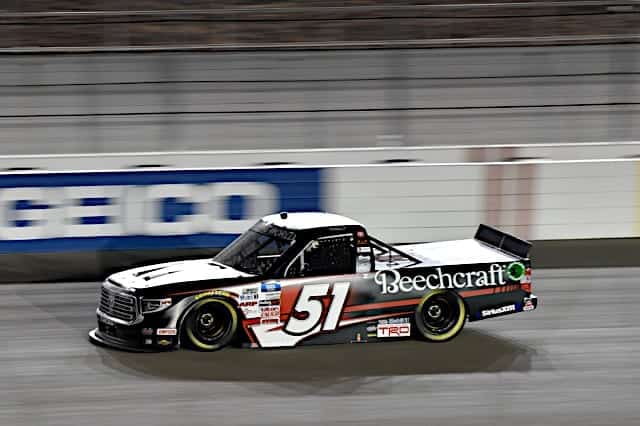 Griffith will pilot the No. 51 in the final race of the regular season with sponsorship from JBL and Hudson International Speedway.

“Derek has proven himself as one of the top young talents in Super Late Model racing in recent years, has been very competitive in his limited ARCA opportunities and is deserving of the opportunity the chance to make a start in the Camping World Truck Series,” Busch said in a team release. “As a Super Late Model racer myself, I know that to win some of the races he’s been able to win the last few years, he’s had to beat some of the best drivers in the country. Many of those drivers have the talent to compete at the National Series level but never get the chance, so to be providing Derek with this opportunity is really special and I know that he’ll do a great job for us.”

All I can say is WOW! pic.twitter.com/vI59slCEir

Several drivers have piloted the No. 51 so far this year, including team owner Kyle Busch, Drew Dollar and Parker Chase.

Griffith will join fellow KBM teammates John Hunter Nemechek and Chandler Smith at Gateway on Aug. 20 at 9 p.m. ET; the race will air on Fox Sports 1 and the Motor Racing Network.

Here’s a young driver who definitely deserves this great opportunity Glad to see he’s on his way..