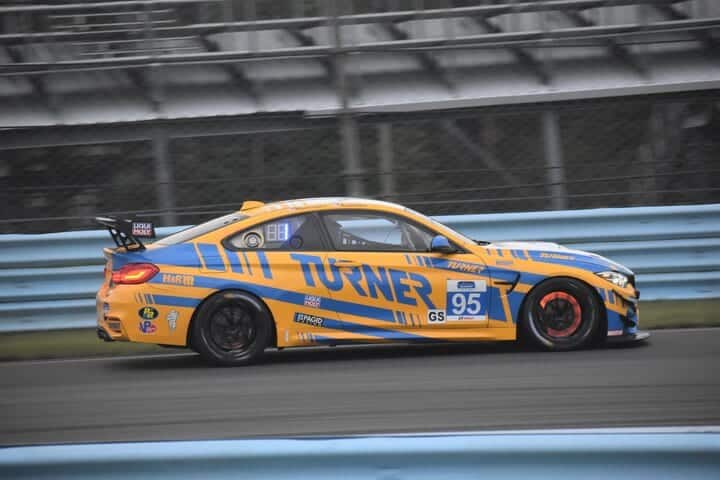 Machavern’s lap was one-sixth of a second faster than Wright Motorsports’ Ryan Hardwick in the only Porsche in the field.  Archangel Motorsports’ Alan Brynjolfsson qualified third in his Aston Martin despite carrying extra weight.  TeamTGM’s Hugh Plumb starts fourth in his Chevrolet Camaro GT4.R, while HTP Winward Motorsport’s Russell Ward was fifth.

The session was cut short by a crash in turn 6 involving FCP Euro’s Michael Hurczyn and CarBahn Motorsports with Peregrine Racing’s Sameer Gandhi.  Gandhi was able to drive his Audi back to the pits with rear end damage, but Hurczyn required a tow to the paddock.

According to IMSA rules, if you cause a red flag, you lose your best two laps.  In Hurczyn’s case, his best lap was fifth quickest.  The penalty drops him down to 17th in class.  Gandhi remained in 20th after losing his best laps.

In TCR, Bryan Herta Autosport’s Harry Gottsacker won the pole with a lap at 104.220 mph, good for 15th overall in his Hyundai Elantra N TCR.  Gottsacker’s lap was one-sixth of a second faster than Atlanta Speedwerks’ Robert Noaker.  Parker Chase in the second Elantra was third, then the Velosters of Copeland Motorsports’ Tyler Gonzalez and Van der Steur Racing’s Rory van der Steur.

There was a big penalty in TCR as well.  Taylor Hagler brought her Veloster N TCR into the pits about five minutes into the session.  The team proceeded to attempt to refuel the car.  That violates the no touching rule during the session.  As a result, Hagler lost all her times and will have to start the race Friday from the rear of the field.

The Sahlen’s 120 at the Glen is scheduled to go green at 2:35 p.m. ET Friday afternoon.  The race will be streamed live on NBC Sports’ TrackPass service.