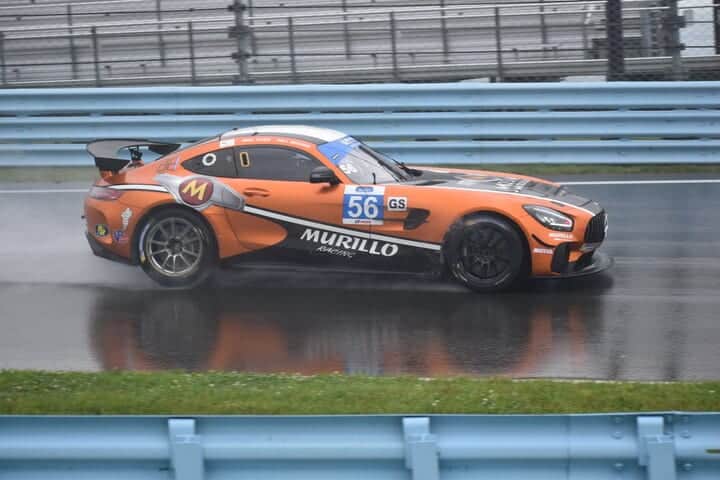 WATKINS GLEN, N.Y. –  IMSA Michelin Pilot Challenge teams only got one 60-minute practice session for Friday’s Sahlen’s 120 at the Glen.  Rain shortened that session to only 47 minutes.

The best conditions were at the very beginning of the session, so those who ventured out early had the best chance at putting up a good time.  Murillo Racing’s Eric Foss ended up fastest overall with a lap at 95.755 mph, a full 23 seconds slower than last weekend.  The lap was set 14 minutes into the session.

Foss’ lap was two-tenths of a second faster than HTP Winward Motorsport’s Alec Udell in a similar Mercedes.  Archangel Motorsports’ Trent Hindman, who was fastest in IMSA Prototype Challenge practice earlier in the afternoon, was third fastest here in his Aston Martin that is a bit heavier this weekend after IMSA required Aston Martin teams to add 30 kilograms of weight.  Indy Dontje in the second Winward Mercedes was fourth, while Motorsports In Action’s Sheena Monk was fifth in her McLaren.

Turner Motorsport’s Robby Foley, who was fastest in GT Daytona practice earlier in the day, was sixth in his BMW M4 GT4.  Wright Motorsports’ Jan Heylen was seventh in his Porsche, then it was TeamTGM teammates Owen Trinkler and Matt Plumb in eighth and ninth.  Bill Auberlen in the second Turner BMW was 10th.

In TCR, Van der Steur Racing’s Denis Dupont was fastest in his Hyundai Veloster N TCR with a lap at 93.419 mph, good enough for 14th overall.  Dupont’s lap was five-hundredths of a second faster than the similar Veloster of Bryan Herta Autosport’s Michael Lewis.  VGMC Racing’s Jon Miller was third fastest despite the Honda Civic Type-R TCR getting an extra 88 pounds (40 kilograms) added to it by IMSA this week.  Mark Wilkins had the fastest Elantra N TCR in fourth, while CB Motorsports’ Trenton Estep was fifth.

Qualifying for the Sahlen’s 120 at the Glen is scheduled for 7:55 p.m. ET Thursday.  We’ll have a recap of qualifying right here at Frontstretch.