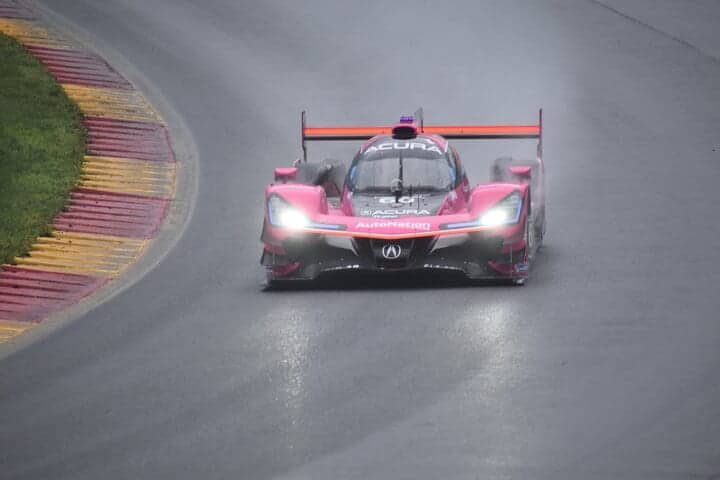 WATKINS GLEN, N.Y. – The sole practice session Thursday (July 1) for the WeatherTech 240 at the Glen was indicative of what the rest of the weekend could look like.  Sketchy.  Heavy rains limited on-track action, but Meyer Shank Racing with Curb-Agajanian’s Olivier Pla was fastest overall with a lap at 112.487 mph right at the end of the session.

The 75-minute session saw limited on-track running.  No one completed more than 20 laps.   Most were in the mid-teens, but some completed less than 10 laps.

Early on, the track was very wet from the previous Prototype Challenge practice session, but not raining very hard.  This was when Pla set a banker lap at 106.911 mph, more than two seconds faster than anyone else.

Then, the rains picked up in intensity and the red flags started piling up.  Oliver Jarvis stopping his Mazda on his out lap caused the first stoppage.  Shortly afterwards, Chip Ganassi Racing’s Renger van der Zande spun after hitting standing water and damaged his Cadillac DPi-V.R.

Finally, Jarett Andretti went off in turn 8 and heavily damaged his Ligier JS P320-Nissan, bringing out the third and final red flag.  Andretti was the only one of the three to not get back out on-track after his incident.

In the closing 20 minutes of the session, the rain stopped and the skies brightened up.  That resulted in a rush to get back out on track.  Pla’s time was beaten with 11 minutes to go.  Drivers continued to lower and lower the mark until Pla set his best time with less than five minutes remaining.  That held up to be the fastest lap of the day.

In LMP2, everyone managed to keep themselves out of trouble.  Tower Motorsport by Starworks’ Gabriel Aubry ended up fastest with a lap at 104.985 mph, good for seventh overall.  Aubry was more than a second faster than PR1 Mathiasen Motorsports’ Mikkel Jensen.  WIN Autosport’s Tristan Nunez was third.

GT Le Mans saw the Corvettes switch off at the top of the charts.  In the closing minutes, Nick Tandy turned in a lap at 102.932 mph, good for 10th overall, to top the class.  He was nearly three-quarters of a second faster than teammate Antonio Garcia.  WeatherTech Racing’s Matt Campbell was quite a bit further back in his repaired Porsche.

Prior to their big crash, Andretti Autosport’s Oliver Askew set the fastest time in LMP3 with a lap at 102.478 mph, good for 11th overall.  Askew’s lap was four-tenths of a second faster than Riley Motorsports’ Dylan Murry.  Teammate Felipe Fraga was third, then CORE autosport’s Colin Braun.

GT Daytona saw their entry cut down from 13 to 12 cars in the days leading up to the race.  Since Friday’s race is a WeatherTech Sprint Cup-only race that doesn’t count for regular points, Wright Motorsports chose to withdraw their Porsche.

In the session itself, Turner Motorsport’s Robby Foley was fastest in his BMW M6 GT3 with a lap at 99.686 mph, good enough for 16th overall.  Foley’s lap was more than a half-second quicker than Vasser Sullivan’s Aaron Telitz.  Compass Racing’s Mario Farnbacher was third, then CarBahn Motorsports with Peregrine Racing’s Jeff Westphal and Paul Miller Racing’s Madison Snow.

Qualifying for the WeatherTech 240 at the Glen is scheduled for 5:40 p.m. ET Thursday.  The session will be streamed live at IMSA.com and on NBC Sports’ TrackPass service.