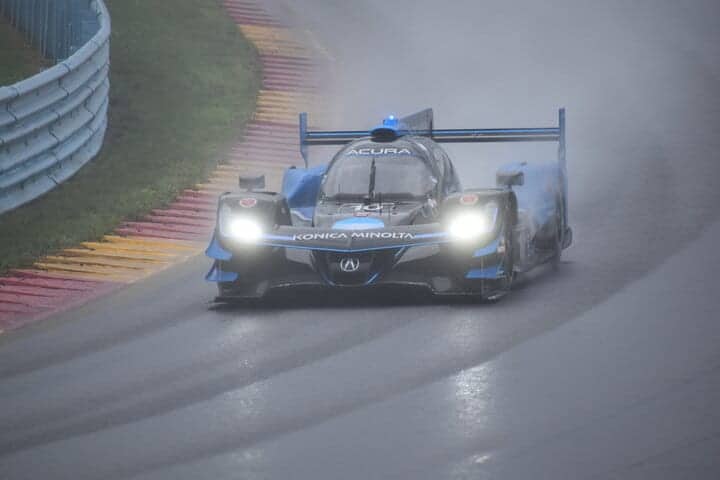 The DPi/LMP2 session was the driest on-track session in qualifying.  Slicks were clearly the way to go.  It wasn’t long before teams were able to get back to the laps seen in the dry last weekend.

The session saw a number of contenders for pole.  Ricky Taylor set the first banker lap, then Harry Tincknell and Pipo Derani were on top.  Ricky Taylor took over the pole from Tincknell with six minutes to go in the session, then managed to improve his time to the eventual pole lap.  That pole lap was a third of a second faster than Meyer Shank Racing’s Olivier Pla, who was fastest in practice earlier in the day.

Chip Ganassi Racing’s Kevin Magnussen will start third in his Cadillac, followed by Derani and Tincknell.  For Tincknell, he lost the chance to improve late in the session after he ran wide exiting turn 8 and hit a placard on the side of the track.  Part of that placard attached itself to Tincknell’s nose, raising his temperatures.  With a minute remaining, Tincknell pulled off-course onto the short course, ending his session,

In LMP2, it came down to a duel between PR1 Mathiasen Motorsports’ Ben Keating and WIN Autosport’s Steven Thomas.  Thomas set a strong time with a little more than a minute to go and looked good for another pole.  Keating came back around the 3.4-mile road course and set a lap at 128.884 mph right at the end of the session to steal the pole away from Thomas with what he described as “heroic sectors.”

LMP3 qualifying saw Performance Tech Motorsports’ Mateo Llarena, running in qualifying for the first time, dominate the session.  His first lap at speed was seconds ahead of the rest of the class, then he kept going.

With six minutes to go, Llarena set a lap at 119.260 mph that held up to take the class pole.  Llarena’s lap was nearly three-quarters of a second faster than CORE autosport’s Jon Bennett.  Andretti Autosport’s Jarett Andretti, driving a repaired car after a practice crash, will start third.  Riley Motorsports’ Gar Robinson and Dawson Racing’s Theodor Olsen were fourth and fifth.

Olsen was fourth fastest on-track, but he spun with three minutes in the session exiting turn 9 and stalled in the middle of the track facing backwards.  This brought out a red flag that ended the session early.  Under IMSA rules, you lose your two best laps if you bring out a red flag.  That put Olsen back to the rear of the class.

GT Le Mans qualifying saw the Corvettes battle among themselves during the session.  Nick Tandy set a great time, but Jordan Taylor set a lap at 117.895 mph that was good enough to give him the, GT Le Mans pole for the race.  Taylor’s lap was two-tenths of a second faster than Tandy.  WeatherTech Racing’s Cooper MacNeil will start third in class, but was well down the order due to a decision to qualify on wet tires.

In GT Daytona qualifying, teams had a big decision to make in regards to tires.  They had to choose the proper tire not just for the first session, but the second session for points as well.  As a result, you had a mixed bag of teams qualifying on slicks or wet tires.

At first, the cars on wet tires were the best.  Paul Miller Racing’s Madison Snow was fastest until the last couple of minutes, when a scramble broke out at the front.  Snow ultimately prevailed with a lap at 102.530 mph to win the class pole.

Snow’s lap was three-sevenths of a second faster than Vasser Sullivan’s Frankie Montecalvo.  CarBahn Motorsports with Peregrine Racing’s Richard Heistand and Gradient Racing’s Till Bechtolsheimer actually tied for third to the thousandth of a second.  However, Heistand gets the spot because he set the time first.  The Acura of Compass Racing’s Jeff Kingsley will start fifth.

In points qualifying, the track continued to dry, so those teams on slicks became faster and faster.  However, it was still quite treacherous.

Turner Motorsport’s Bill Auberlen found this out the hard way.  He attempted a pass entering turn 6 on Compass Racing’s Mario Farnbacher partway through the session.  He made the pass, but went too hot into the turn.  The BMW drifted to the outside, clipped the grass and spun, briefly making contact with the tire barrier.  While the No. 96 BMW M6 GT3 did suffer some nose damage, Auberlen was able to press on.

At the end of the session, Vasser Sullivan’s Jack Hawksworth ended up fastest with a lap at 114.405 mph to earn the full 35 points.  Interestingly enough, Auberlen recovered from his spin to be second fastest, half a second behind Hawksworth.  Alegra Motorsports’ Daniel Morad was third fastest, followed by Farnbacher and The Heart of Racing’s Ross Gunn.

GRT Grasser Racing Team made a big mistake during the points portion of qualifying.  They apparently put a car cover on their Lamborghini Huracan GT3 during the session.  This counts as touching the car during the session, which is strictly forbidden.  Under IMSA rules, this results in the team getting all their laps from both sessions being stripped.  Misha Goikhberg will start at the rear of the field and the team will earn no points from qualifying.

The WeatherTech 240 at the Glen is schedule to go green at 6:10 p.m. ET Friday evening.  The race will be broadcast live on NBCSN.